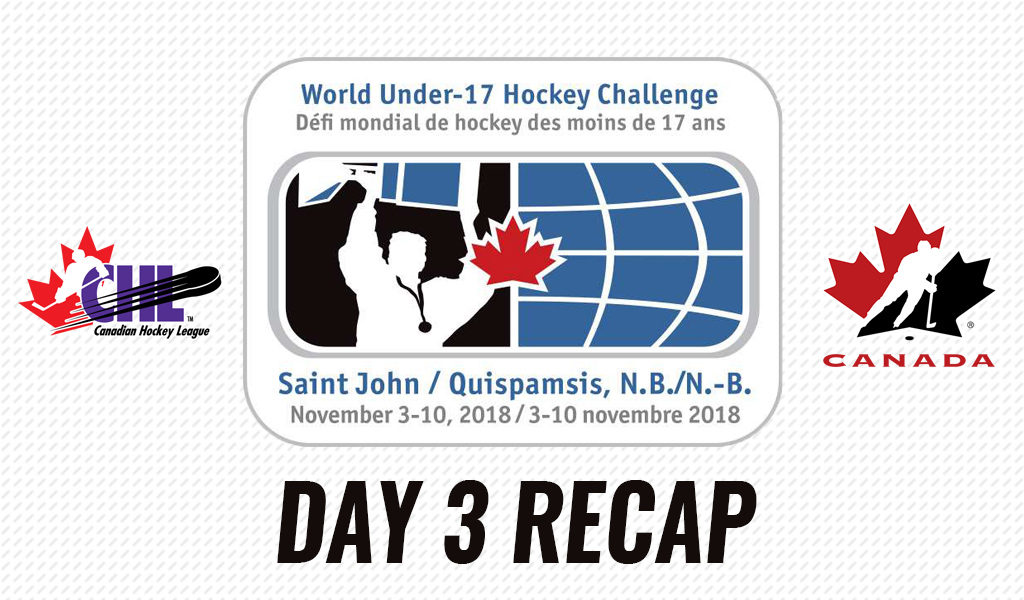 Jake Neighbours scored on the power play just 34 seconds into game action, and Sebastian Cossa turned aside 28 of 30 shots he faced as Canada White defeated the United States, 5-2, in one of four games on Day 3 of the World U-17 Hockey Challenge in Quispamsis and Saint John, NB on Monday.

It was the first time since the national team format was established in 2014, that all three Canadian teams were victorious on the same day as Canada Red and Canada Black also skated away winners.

CANADA RED 4; SWEDEN 3 – OT
William Dufour (Rouyn-Noranda Huskies) got help from Seth Jarvis (Portland Winterhawks), scoring 3:19 into overtime to give Team Canada Red a 4-3 victory over Sweden. Evan Vierling (Flint Firebirds) tied the score at three with 5:31 left in the third frame while Jacob Perreault (Sarnia Sting) and Niagara IceDogs prospect Stephen Halliday also scored for Canada. Will Cranley (Ottawa 67’s) stopped 30 of the 33 shots he faced, surrendering a pair of Swedish goals by Lucas Raymond along with one by Alexander Holtz. Swedish netminder Jesper Wallstedt made 29 saves in defeat.
GAME SUMMARY

CANADA WHITE 5; UNITED STATES 2
Sunday’s overtime hero Connor McClennon was back at it, recording five points including a hat-trick and two assists to lead Team Canada White past the United States 5-2. McClennon scored in each period, tallying on the power play in the first, at even strength in the second and shorthanded in the third to help hand the Americans their most lopsided preliminary round loss since 2004. Theo Rochette (Chicoutimi Saguenéens) chipped in with a goal and two assists while Jake Neighbours (Edmonton Oil Kings) also found the back of the net. Cole Perfetti (Saginaw Spirit) followed up four points on Sunday with two assists while goaltender Sebastian Cossa made 28 saves. Team Canada White improves to 2-0 while the United States sits at 1-1.
GAME SUMMARY

GAME OVER! Valtteri Karnaranta buries a rebound with 3 minutes left to give ?? a 2-1 win over ??. Game stats: https://t.co/2CJ3ANZPub #WorldU17 pic.twitter.com/SWFkMW7IzV

For news, stats and scores from the 2018 World Under-17 Hockey Challenge, visit hockeycanada.ca.