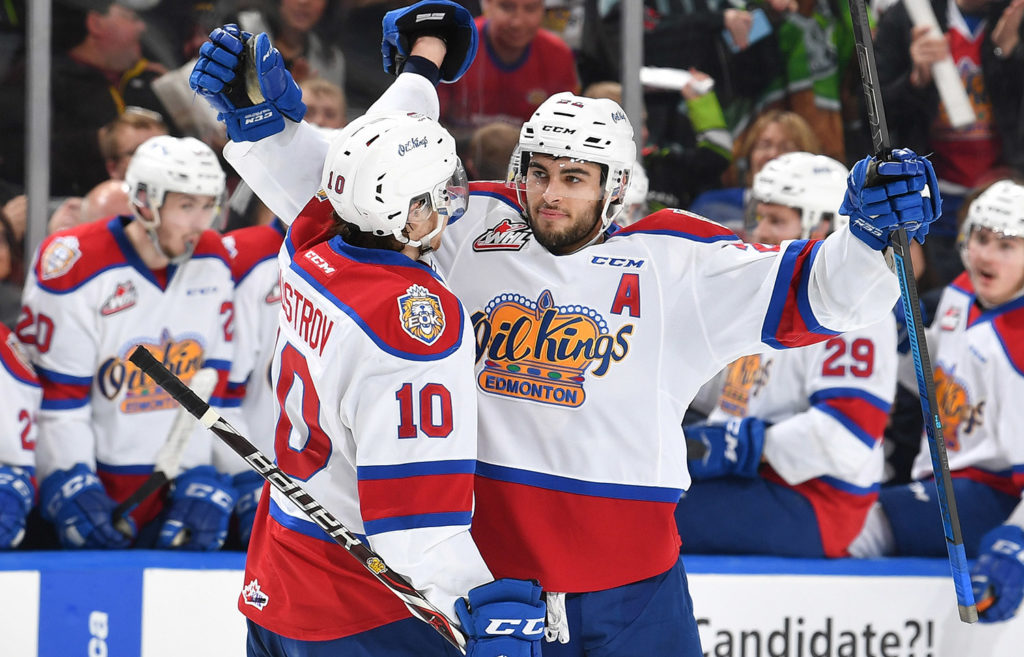 To say that Matthew Robertson’s first year of NHL Draft eligibility was a successful one would be an understatement.

The homegrown Sherwood Park, AB product kicked off the campaign by being named to Team Canada for the 2018 Hlinka Gretzky Cup. The tournament took place right at home at Rogers Place, and allowed his talent to be shown on a greater stage.

From @CraigJButton & @Tessab25: How Canada’s offence at the #HlinkaGretzkyCup starts from the back end with players like Matthew Robertson https://t.co/iGaqDTIWcP#TSNHockeypic.twitter.com/pXn7aRhoyw

Scoring two goals and four points in the tournament, he was instrumental in Canada’s thrilling, last-second semi-final victory over the United States and eventual 6-2 gold medal win over Sweden.

Unbeknownst to them at the time, he shared that gold medal win with future Oil Kings teammate and fellow Draft eligible skater, Josh Williams.

Thanks @HockeyCanada for one of the best experiences of my life! Unforgettable experience in my home town! #WorldChamps#HlinkaGretzkyCuppic.twitter.com/yltLAoNrsA

His impressive performance at the Hlinka Gretzky Cup exhibited not only his talent, but his dedication to hard work and commitment to striving for improvement over the course of the off-season.

A day before the 2018-19 regular season campaign was set to begin, the Oil Kings staff announced that Robertson would be named as one of the Club’s four alternate captains, making him one of the youngest players to be named to the team’s leadership group in recent years.

Robertson was consistent to start the season, and steadily improved both with and without the puck as the year went on. He enjoyed a six-game point streak from the end of October to early November where he tallied two goals and six assists for eight points.

Heading into the holiday break he once again registered points in six straight games (2G, 4A), and was selected to participate in the 2019 Sherwin-Williams CHL/NHL Top Prospects Game in Red Deer (with the newly acquired Williams) on January 23.

Look who has been selected to compete in the 2019 Sherwin-Williams CHL/NHL Top Prospects Game! 👀

It was apparent to fans and scouts alike who followed Robertson’s season that he was capable of being a monster contributor for the Oil Kings – and that his journey wouldn’t stop at Major Junior.

His hottest point-streak came just before the end of the regular season when he notched a goal and nine assists for 10 points in seven games.

However, it was his sense of responsibility in the defensive end combined with his high hockey IQ made him one half of the team’s top pairing throughout the Oil Kings playoff run and a dependable reargaurd who soaked up an exorbitant number of minutes while helping the team achieve success.

WHL Growing the Game’s Best Talent with @bctreefruits: Matthew Robertson is ready to take the next step. #NHLDraft#BCTFGrowsWHL 🍎 | https://t.co/mqYU9ozYICpic.twitter.com/whivZt4zG0

Robertson potted seven goals during each of the past two regular seasons, and tallied four in just 16 postseason games in 2019.

After being ranked on NHL Central Scouting’s Players to Watch List all season long, he attended the NHL Scouting Combine where he placed in the Top-25 of 108 attendees in four different categories.

He finished fourth overall in the bench press, which also proved to be the highest score of any WHL player attending the Combine.

Coming off of a fantastic year with the Edmonton Oil Kings, Matthew Robertson talked to The Hockey News’ Ryan Kennedy about the strong WHL presence at the draft, combine week and playing in his hometown.https://t.co/salYFrCXFq

It’s not a question of IF an NHL team calls Robertson’s name at the Draft, it’s just a matter of when. Then will begin the next chapter in his hockey journey.