MENU
THE WESTERN HOCKEY LEAGUE HAS ANNOUNCED ITS RETURN TO PLAY PROTOCOL FOR THE 2020-21 SEASON
June 14, 2019 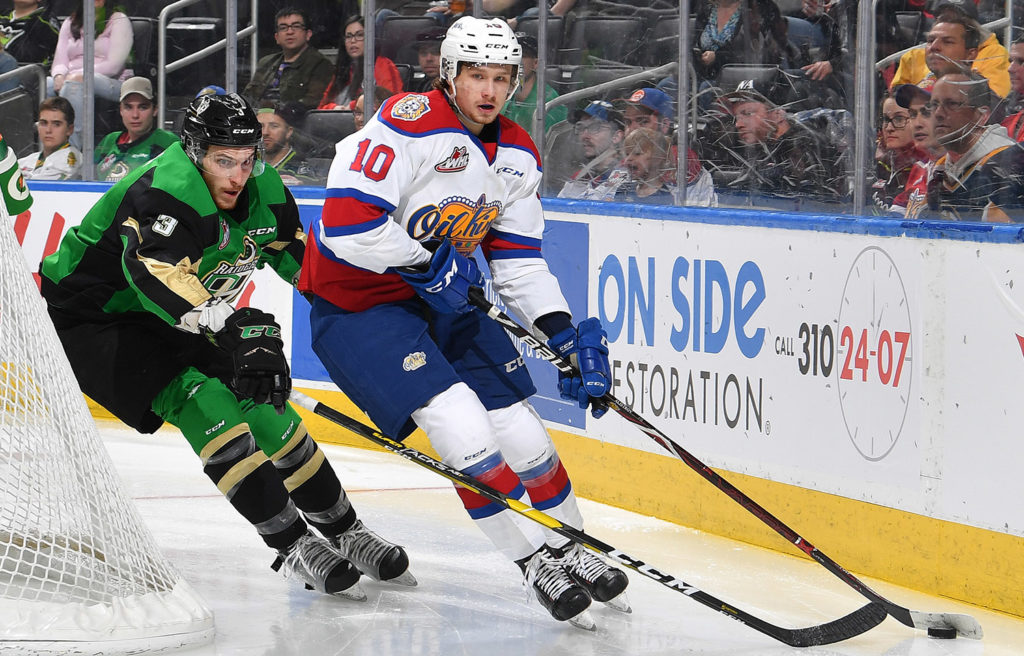 Vladimir Alistrov is a man of few words, so instead he let his play do the talking in his rookie WHL campaign in 2018-19.

At the U18 World Championship, he garnered even more attention by registering three goals and seven points in five tournament games.

Vladimir Alistrov’s five-point night, including the winner with 12 seconds left, gave Belarus a 5-4 victory over @SwissIceHockey at the #U18Worlds. Belarus makes the quarter-finals, while the Swiss will play relegation. https://t.co/bQBws3OYWBpic.twitter.com/0rvca9JFaV

The 6-foot-2, 176 pound native of Mogilev, Belarus became the Oil Kings first pick in the 2018 CHL Import Draft with the second overall selection in the first round, making him the second Belarussian import to dress for the team in the 2018-19 campaign, along with fellow countryman Andrei Pavlenko.

It was a new country and a new League, but it didn’t take Alistrov long to make an impression on the scoresheet. His first WHL goal came in just his fourth career game, and it was the first of many goals that would make the highlight reel during the course of the season.

His first career WHL goal was certainly a milestone, but not the only one he would achieve during the year.

Alistrov would register seven multi-point games as a rookie, including his first three-point game (1G, 2A) on February 26 vs. the Swift Current Broncos, which gave him a season-high four-game point streak with three goals and five assists for eight points during that span.

While he adjusted well to the North American game in his first season, he also had the opportunity to once again play internationally as he and Pavlenko were both selected to represent their country in the IIHF U20 World Championship (Division 1 – Group A) in December.

He continued to turn heads, registering a pair of goals and four assists for six points in five tournament games helping Belarus claim a silver medal.

Belarus and your #OilKings, Andrei Pavlenko and Vladimir Alistrov, take silver 🥈 in the IIHF U20 World Championships. #representEOK

Producing at better than a half-a-point-per-game pace (0.61) in his rookie year, not only did he provide depth to an Oil Kings squad who went to the Eastern Conference Championship, but he did so with a number of draw-dropping plays and silky smooth snipes.

The push for the Central Division crown began months – not weeks – before the end of the regular season, and when the team was on the national stage Alistrov ensured fans couldn’t look away.

The @EdmOilKings looked good in @CoachsCornerDC inspired sweaters and on the scoreboard in #CHL #SaturdayShowcase action on @Sportsnet beating @WHLHitmen 3-2 with goals by Robertson, Souch, and Alistrov to extend their lead atop @TheWHL’s Central Division.#WhereGreatnessBegins pic.twitter.com/PuEd0cT8uP

His skill, play-making ability and frame made him a focal point not only for fans but for scouts as well.

The first year draft eligible prospect was listed on NHL Central Scouting’s Midterm Rankings and Players to Watch list throughout the entirety of the season.

Your #OilKings have 4 players listed on the @NHLCentralScout Final Rankings for the 2019 NHL Entry Draft! #allhail #representEOK

He was named the Oil Kings Rookie of the Year, and hopes to hear his name called by an NHL team in advance of his sophomore season in the WHL in 2019-20.