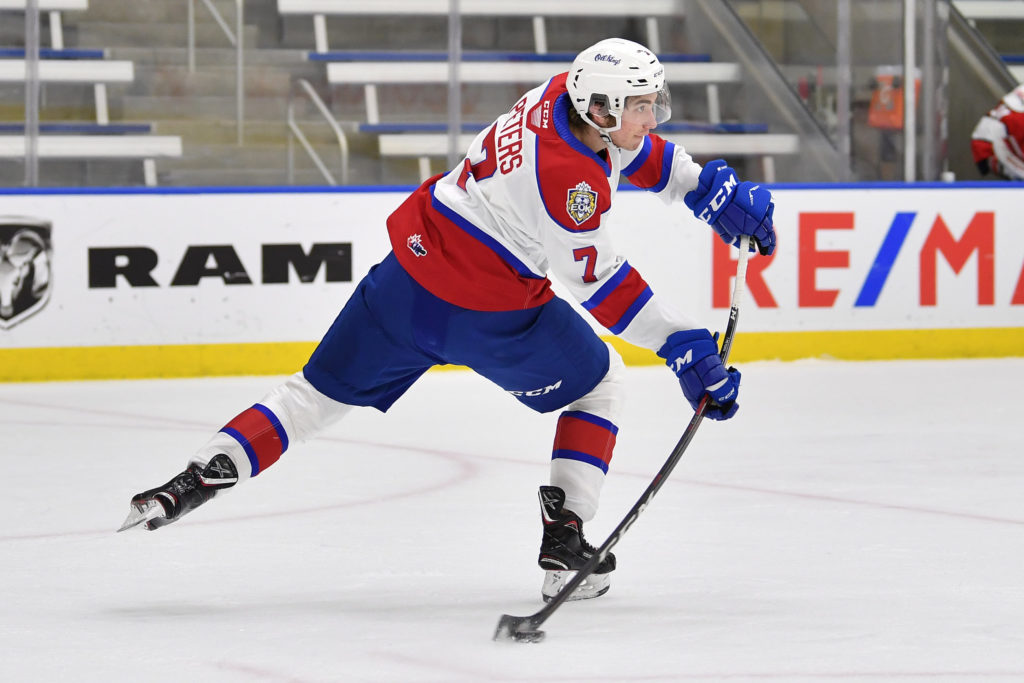 The 2020-21 Western Hockey League season featured a lot of unknowns, and even more so for Edmonton Oil Kings rookie defenceman and 2021 NHL Draft prospect Ethan Peters.

“It was definitely different, it was a mental challenge just to keep going with all the unknowns and not knowing what was going to happen,” said Peters. “It was pretty much just preparing and hoping to be in the WHL and be with Edmonton, that was the main driving force behind my workouts and staying focused.”

In January, just like for the league itself, things started to come a little more into focus for Peters. On January 4 he signed his WHL Standard Player Agreement after sitting on the Oil Kings protected list since September of 2018 and putting up two exceptional seasons with the Moose Jaw Warriors U18 AAA team. With opportunity knocking, Peters wasted no time asserting himself as a top-four defenceman on already deep Oil Kings roster.

“As the season went on he just got better and better,” said Oil Kings President of Hockey Operations and General Manager Kirt Hill on how Peters was able to slide into a prominent role on the club. “As a list player, it’s pretty impressive where he’s come from that point to now. He has a calming temperament mixed with his hockey IQ and his ability to make such good puck decisions on the ice that makes him such a valuable player.”

“It goes back to that calming temperament with the way he plays the game, he makes things look so easy. He’s a really bright kid, when coaches are throwing systems at him and he’s evaluating things in-game he’s processing things really quick and I think that’s what helped in step into the league and our lineup playing big minutes so early in his career.”

Bright he is, following the conclusion of his first season in the WHL that saw him play in all 23 games for the Oil Kings recording five points (1G, 4A) to go along with a +9 plus/minus rating, he was named the WHL’s Scholastic Player of the Year. He is the first player in Oil Kings history to win the Daryl K. (Doc) Seaman Memorial Trophy thanks to a core average of 94.67% for his grade 12 courses.

“That was amazing, it was a really special achievement,” said Peters. “A lot of great people have won it over the years so that was a tremendous honour and to do it my first year in the league was really exciting and not something I was expecting.”

When the final horn sounded on the Oil Kings season, there was plenty to be proud of for the second generation WHL defenceman. However, what came next wasn’t so much an unknown as it was unexpected; on May 27 he was ranked 198th amongst North American skaters by NHL Central Scouting making him a viable option for the 32 NHL teams at the 2021 NHL Draft set for July 23-24.

“It was always something in the back of my mind, but it was definitely way off the radar,” added Peters on seeing himself ranked. “I was really just hoping to play a full season of AAA this season and seeing what happens, but it was really exciting to get that recognition and a big honour.”

What is now known about Peters is that he an important piece to the Oil Kings backend ahead of the 2021-22 WHL season, all that remains as an unknown now, is which NHL team will potentially call the name of the once overlooked rearguard.