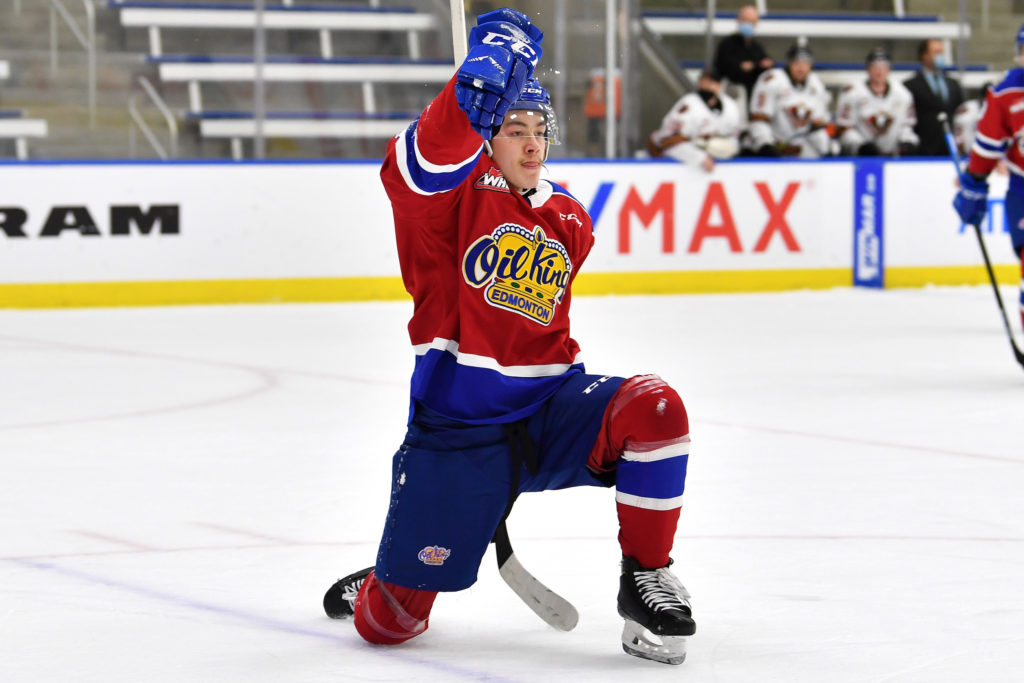 Being named as the Edmonton Oil Kings Most Improved Player for the 2020-21 season was well earned by forward Jalen Luypen.

Heading into the pandemic shortened WHL season, Luypen felt that he a lot to prove. The former ninth-round WHL draft pick had already racked up 111 career games played and 31 points (13G, 18A), but being passed over in the 2020 NHL Draft, and having not yet reached the potential he knew he had, the Oil Kings energetic forward set out to make the most of the 11-month layoff prior to the 2020-21 season.

“For me, that 11-month offseason was a grind and it was the biggest help for me to get my body where it needed to be for me to compete and show everyone the true side of me that they hadn’t seen yet,” said Luypen. “I knew I had to have a big season, and the coaching staff knew that to, and they put in me a great position to succeed. I was really fortunate to play with two really good linemates with Keels (Liam Keeler) and Lats (Carson Latimer) as well.”

The work he put in quickly started to yield the results he was looking for as he recorded 10 points (6G, 4A) in the team’s first seven games of the season, establishing himself as a legitimate scoring threat.

“What he did in Kelowna (during the extended offseason) with his training program and the guys he was skating with, a lot of pro guys, that really helped raise his game to the next level,” said Oil Kings President of Hockey Operations and General Manager Kirt Hill. “When he got here and with the type of season it was he had an opportunity to play in a role he hasn’t had the last couple of years, being in the top-six and on the power play, playing big minutes. His confidence was high, and he ran with the opportunity right from the first game.

“A few things in his game that I thought really improved were his skating, he got more power in his stride, with a lot more quickness and shiftiness making him more elusive; the second thing I really noticed in his game was his shot went to the next level with that extra power to it, along with a quick release so he is able to beat goalies clean.”

When the smoke cleared on the condensed season, the Kelowna, BC native had set new career highs in goals (16), assists (13) and points (29) in just 23 games, finishing third in team scoring and fifth in the league’s goal scoring race. Despite the breakout campaign, he says he still feels he can find another gear.

“I’m never satisfied, I think there is always room to grow and get better,” added Luypen. “I’m just going to keep going and keep breaking that seal of potential for myself and I’m not going to stop until I’m done playing hockey.”

The 5-foot-10, 155-pound forward was anointed the team’s Most Improved Player, while also unofficially cementing himself as perhaps the league’s most motivated player. On May 27, Luypen’s work ethic and self-belief was vindicated when NHL Central Scouting ranked him 133rd amongst North American skaters ahead of the 2021 NHL Draft set for July 23-24.

“It’s a really cool experience, I feel really lucky to be in this situation,” said Luypen on seeing his name attached to the rankings. “I’m just taking this all in and making memories out of it. Like I said before, I wouldn’t be in this situation without my teammates and I can’t thank them enough for that”

When it comes to draft day, Luypen says he’s most excited to potentially hear his teammates Dylan Guenther, Sebastian Cossa, Carson Latimer and Ethan Peters have their names called and as for how he will approach the day itself? He’ll be keeping busy.

“I will be trying to act like it’s a normal day, I actually have a tee-time booked to hit the golf course that day,” laughed Luypen.