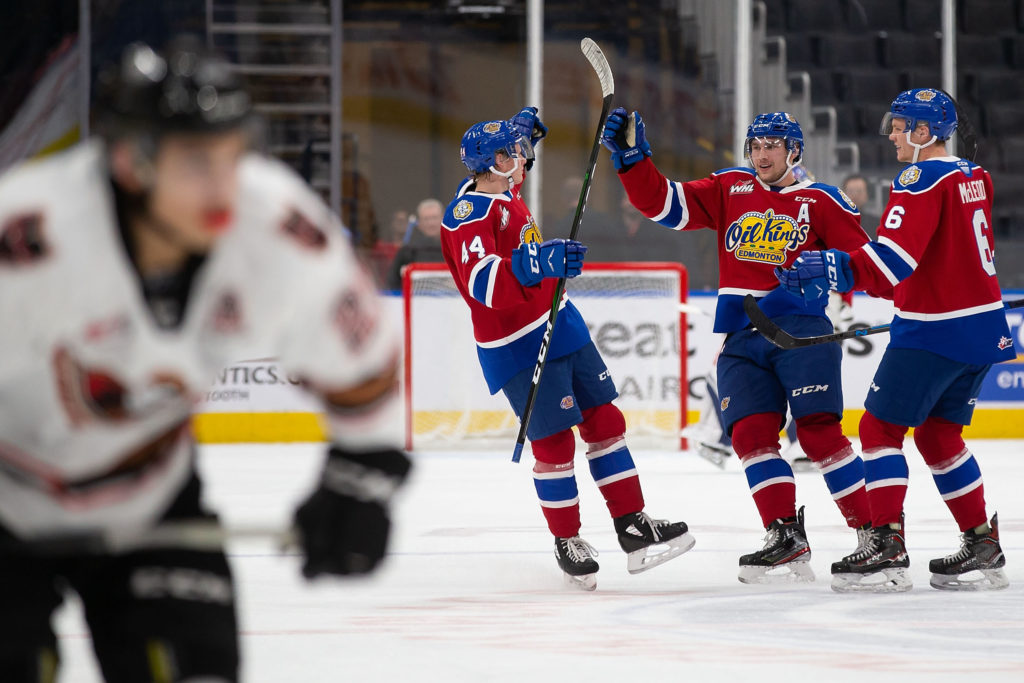 The Edmonton Oil Kings made a powerful statement during the second period of their game against the Calgary Hitmen on Saturday night.

Edmonton trailed 2-0 after 20 minutes of play but stormed back in the second period, outscoring Calgary 4-1 in the middle frame. The Oil Kings would finish the night an astounding 4-for-6 with the man advantage, which ultimately handed Calgary their first regulation loss of the season.

There were plenty of spotlight performances on the night, starting with the first career WHL hat trick for Edmonton native Carter Souch who scored a power play goal 21 seconds into the second period, the game winner 38 seconds into the third, and an empty net insurance marker with 43 seconds remaining.

The spotlight also shone on the broadcast booth, as the game marked the first since the 2017-18 season for TSN 1260 play-by-play man Corey Graham, who spent the last 19 months battling, recovering from and treating a life-threatening medical issue. 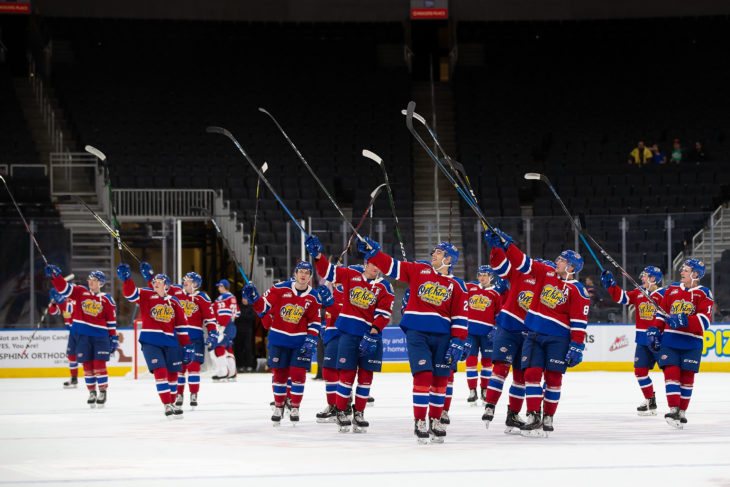 The Oil Kings salute Corey Graham in the broadcast booth following the team’s 6-4 win over the Hitmen.

The Hitmen got on the board first, capitalizing on their first power play opportunity of the night just over five minutes into the game.

They extended their lead to 2-0 with just 2:21 remaining in the opening period and carried hat lead into the first intermission.

Shots on goal in the first period were 8-6, Oil Kings.

In the second, the scoreboard tilted drastically in Edmonton’s favour, beginning just 21 seconds in as Souch tallied his first of the night, and third of the season, on the power play from Conner McDonald.

The Oil Kings also converted on their very next power play, as Riley Sawchuk fired a blast from the left face-off dot to tie the game, 2-2, from Matthew Robertson and Dylan Guenther at 6:32.

Exactly two minutes later the Oil Kings would gain yet another man advantage, but it came with a high price to pay by one of their own.

At 8:32, defenceman Jacson Alexander was injured on a play along the boards in the neutral zone after taking a hit from Calgary’s Adam Kydd. Alexander skated off the ice to the Oil Kings dressing room and did not return, while Kydd would be assessed a five minute major for checking to the head and a game misconduct.

On that ensuing major, Ethan McIndoe scored in his first home game as an Oil King to give the team its first lead of the game, 3-2. Gaining possession of the puck and taking it deep into the offensive zone, McIndoe executed a beautiful wraparound and buried the puck into the wide open cage, with Jake Neighbours and Robertson earning the helpers. 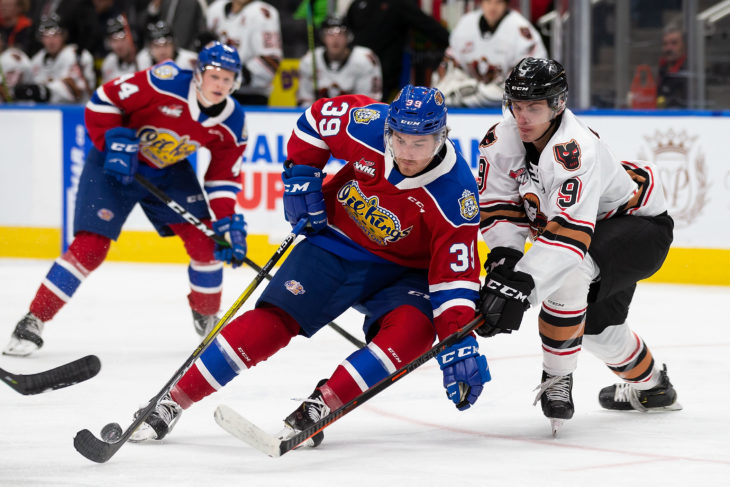 The Oil Kings only took one minor penalty during the middle frame, but the Hitmen capitalized to once again tie the game, 3-3, at 16:21.

But Edmonton would respond before the period was out with yet another power play goal – their fourth of the period – to regain the one-goal lead. Josh Williams tallied his fourth goal of the campaign, with McDonald and Vladimir Alistrov earning assists, to send the game into the second intermission.

Shots on goal in the second period were 12-6, Edmonton.

For the second straight period Souch etched the scoresheet early, potting his second of the night just 38 seconds into the third, from McIndoe and Liam Keeler to extend the Oil Kings lead to 5-3.

The Hitmen, however, continued to hang around after a puck twice-deflected found its way past Scott to cut the Edmonton lead to 5-4 at 9:36.

The final goal of the game came on the stick of Souch – his third of the game and fifth of the season – into an empty net, assisted by Keeler at 19:17.

Calgary was 2-for-4 on the power play while Edmonton went 4-for-6 with the man advantage.

Before puck drop, Josh Williams was awarded the Blue Willow Restaurant/Vic Mah Trophy as Unsung Hero for the month of September.

The Oil Kings are back on home ice in short order when they host the Portland Winterhawks tomorrow, Sunday, October 13 at 4:00 PM MT at Rogers Place.