Adversity is nothing new to Trey Fix-Wolansky. Listed at just 5’6”, the undersized forward went undrafted in both the WHL and his first year of NHL eligibility.

Beating the odds and showing up his critics is what he does at every level. However, Fix-Wolansky was up against something foreign to him just days into his first year of professional hockey. Something that would test him mentally and physically like never before.

Draft year came a year late for Fix-Wolansky. Drafted in the seventh and final round by the Columbus Blue Jackets as a 19-year-old, Trey signed his first pro deal nine months later after a break out 102-point season as the captain of the Edmonton Oil Kings.

That season ended with a heartbreaking game six defeat to the eventual WHL Champion Prince Albert Raiders in the Eastern Conference Finals. While a disappointing end to his junior career, the playoff exit allowed Fix-Wolansky to jump right into the Cleveland Monsters’ first round playoff series, the American Hockey League (AHL) affiliate of the Columbus Blue Jackets.

“They were playing the Toronto Marlies,” recalled Fix-Wolansky. “I ended up getting into games two, three and four. It was exciting. I just tried to take it all in and use the experience to prepare for the next year.” 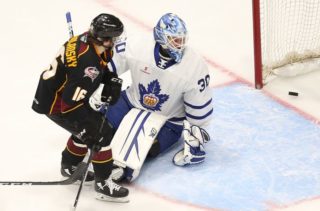 Fix-Wolansky picked up a goal and an assist in those three games, his first introduction to pro hockey.

Trey scored in his first game of the next season too. But from there momentum came to a screeching halt before it could really begin as Fix-Wolansky felt a ‘pop’.

“It was exactly that, a little pop in my groin,” said Fix-Wolansky. “It just lingered. For six weeks. I tried to be engaged around the rink, pick up on things while watching games.

“I was really down about it,” admitted Fix-Wolansky. “It’s tough getting up and going to the rink just to sit around, rehab and watch your team play and have fun without you. It’s a long time to be out.”

The longest, in fact, for Fix-Wolansky’s career. With his return nearly two months and 20 missed games later, there was no immediate ‘pop’ to his game. The scoring chances just weren’t coming.

“It was a slow start,” said Fix-Wolansky. “I started back on the fourth line and I had to prove to my coaches, to myself, that I could play again.”

At the Christmas break Trey Fix-Wolansky was sitting on one point in 11 games played.

It wasn’t just the first year of professional hockey for Trey. It was also his first year living away from home. Playing junior in his hometown of Edmonton allowed Trey to live with his parents who he leaned on daily for support and advice. Support and advice he was eager to get back to during the holidays.

“I was really down about the year I was having while home for Christmas,” admitted Fix-Wolansky. “But my parents reassured me how good I was. They told me I needed a better mentality going back (to Cleveland) and helped me put confidence back in my game.”

With homecooked meals in his belly and the reassurance from home, Fix-Wolansky found his touch almost immediately and was back to being a regular on the scoresheet.

“I started to get more playing time, which helped me adapt to the league a little better,” said Fix-Wolansky. “I slid up the line-up and eventually got a lot of time on the first line on the right wing.” 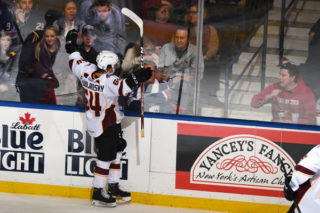 In 32 games after the Christmas break, Fix-Wolansky contributed 28 points. He finished fourth on the team in total points.

“I felt like every game I was getting better and more comfortable playing with the players I was put with,” said Fix-Wolanksy. “It definitely was not the start I wanted. But the success after Christmas I’m really proud of.”

With the AHL season officially cancelled due to the COVID-19 pandemic, Trey finds himself home reflecting on the roller coaster season. Preparing to build on his strong second half by working out in his Aunt’s home gym and shooting on her homemade practice lane in Fort Saskatchewan.

Fix-Wolansky is also reflecting on advice from a teammate on taking the next step.

In terms of finding inspiration and a comparable, it was just a matter of looking across the locker room. The Monsters’ captain, Nathan Gerbe, stands at 5’4”. He’s played 426 career NHL games and was recalled by Columbus midway through this season, never being sent back down to Cleveland.