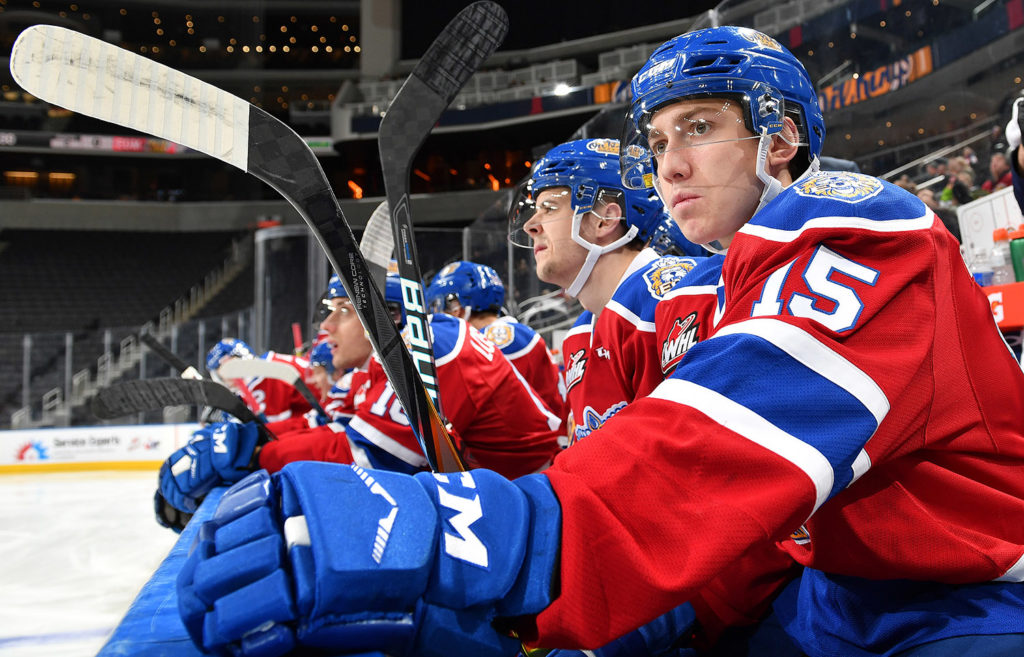 It was an individual effort from Scott Atkinson and a full-team effort from the Edmonton Oil Kings in their first game action since the WHL’s Trade Deadline.

Atkinson tallied a pair of unassisted goals and added an assist to help propel the Oil Kings (22-14-4-3) to a 5-1 win over their divisional opponent, the Lethbridge Hurricanes (22-11-4-4), in front of 4,015 fans at the Enmax Centre on Friday night.

It was the first two-goal game and first three-point night of Atkinson’s WHL career, as the Vancouver, BC native was named First Star in the integral win for the Oil Kings. The two points for the Oil Kings (51) closes the gap to just one point back of the Hurricanes (52) for the Central Division lead.

The Hurricanes got on the board first, but afterwards it was all Oil Kings as goaltender Todd Scott earned his third win of the campaign (3-1-2-0) en route to being named the game’s Second Star.

Liam Hughes (12-17-3-1) took the loss after allowing four goals on 13 shots. He was replaced by Carl Tetachuk who allowed one goal on 12 Oil Kings shots.

Just 3:02 into the game it was Edmonton native Adam Hall who notched his first career WHL goal to give Lethbridge a 1-0 lead, from Igor Merezhko and Zachary Cox.

But the Oil Kings responded less than 20 seconds later, as Atkinson tallied his sixth of the season on a turnover, unassisted, to make it a 1-1 game at 3:21 of the first period.

That was how things would look after 20 minutes of play, as the low-shooting affair favoured the home side by a slight 8-7 margin.

Vince Loschiavo inched closer to the 20-goal club as he also made the most of a Hurricanes turnover, deking Lethbridge goaltender Hughes for his 19th of the season to give Edmonton a 2-1 lead, unassisted, just 1:33 into the second period.

On the Oil Kings third power play opportunity of the night Liam Keeler put Edmonton up 3-1 – a deflection off an initial shot by Andrew Fyten – with Carter Souch earning the second assist on the goal at 7:08.

The Oil Kings continued to press and extended their lead to 4-1 on Jalen Luypen’s sixth of the season, from Andrei Pavlenko and Atkinson, just 40 seconds later at 7:48 to end the night of Hughes.

Shots on goal were again at a premium in the second period, with Edmonton outshooting Lethbridge, 9-8, in the frame, for a two-period total of 16-16.

Atkinson gave the Oil Kings some insurance with his second of the game and seventh of the season, again unassisted, to make it a 5-1 game at 12:45 of the third.

Lethbridge was 0-for-5 on the power play while Edmonton finished the night going 1-for-7 with the man advantage.

Wyatt McLeod, Andrew Fyten and Ethan Cap each wore an “A” and skated as alternate captains to Trey Fix-Wolansky.

The Oil Kings are back in action during their 3-in-3 weekend when they take on the Medicine Hat Tigers tomorrow night, Saturday, January 12 at 7:30 PM at the Canalta Centre.

The next home game for the Oil Kings will be Sunday, January 13 when they once again play host to the Hurricanes at Rogers Place. The game was originally scheduled for 4:00 PM but is now a 5:00 PM start.