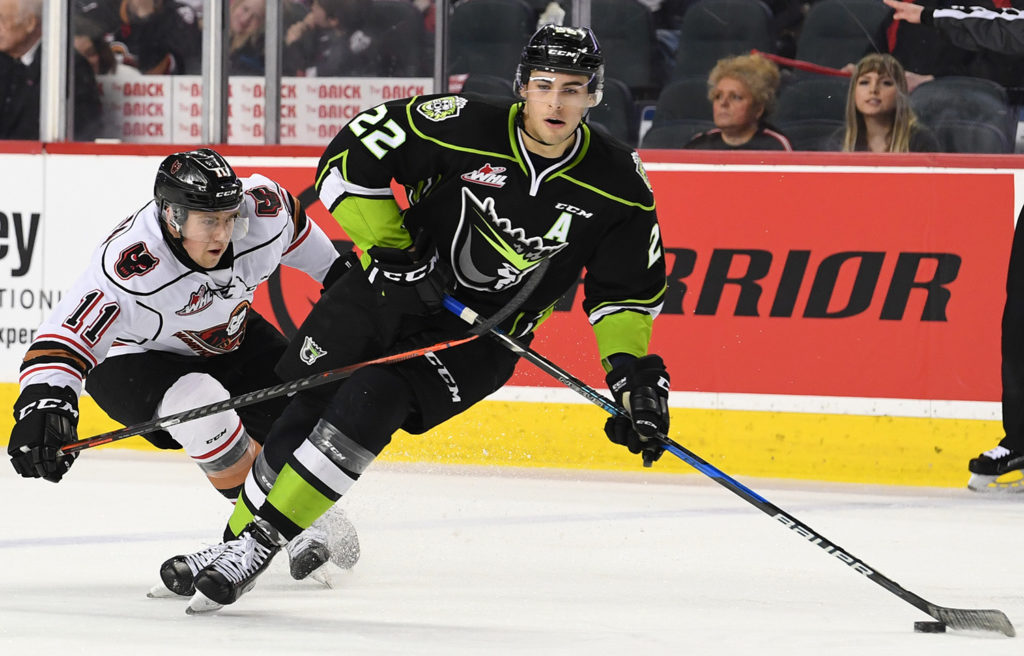 The Calgary Hitmen were making a push to threaten for the Central Division, but the Edmonton Oil Kings proved on Friday night they are a force to be reckoned with when it comes to owning the division – and the Battle of Alberta.

Vince Loschiavo and Trey Fix-Wolansky each had a pair of goals and an assist, and Conner McDonald tallied a trio of assists as the Edmonton Oil Kings (38-18-4-4) dropped the Calgary Hitmen (36-23-5-1), 5-1, in front of 8,310 fans at the Scotiabank Saddledome.

It was the seventh straight win for the Oil Kings, who have earned at least a point in 18 of their last 22 games played (17-4-0-1). They extended their season-high win streak to seven straight games.

The win by Edmonton also snapped a six-game win streak by the Hitmen, who were tight on the tails of the Oil Kings and Lethbridge Hurricanes in the hunt for the Central Division title.

At game’s end, the Oil Kings boast 84 points and maintain the lead in the Central Division by win percentage, despite the fact the Hurricanes (84) were also winners on Friday with a 5-2 victory over the Medicine Hat Tigers.

In the chase for the division title, Lethbridge can only finish as high as 40 wins and 90 points, therefore Edmonton can now clinch the Central with three wins, which would also give them 90 points but 41 wins.

Fix-Wolansky’s three-point effort bumped him to 99 points on the season (35G, 64A), and placed him into sole possession of most assists in a single season in Oil Kings modern franchise history (64), having entered the game tied with Dylan Wruck (2012-13) at 63.

Dylan Myskiw (26-11-2-3) earned his sixth straight win with a strong effort when called upon between the Oil Kings pipes, turning aside 24 of 25 shots he faced.

The Oil Kings opened the scoring on Quinn Benjafield’s 14th of the season – and a pretty one it was – as the veteran stood beneath the goal line to the far side of McNaughton and beat the Calgary netminder with a bank shot off the back of the jersey at 9:19, from Loschiavo and McDonald.

In the spirit of beautiful goals they don’t get much better than what came off the stick of Fix-Wolansky with a minute and a half to play in the frame, as the captain tallied a sure-to-be highlight reel tally by skating in on McNaughton, then pausing before scoring on the backhand – on one foot – to give Edmonton a 2-0 lead, from Andrew Fyten and McDonald to close out first period scoring,

Shots on goal in the opening period favoured the Oil Kings, 10-9.

In the second, Edmonton extended their lead to 3-0 as Loschiavo earned his 32nd of the year with another goal-line snipe, this time from the blocker side of McNaughton, assisted by Fix-Wolansky and McDonald by way of a 5-on-3 power play.

Just under five minutes later Hitmen captain Mark Kastelic increased his goal total on the season to 46 to cut the Edmonton lead to 3-1 – also a power play marker – which is how the game would look after 40 minutes of play.

Edmonton outshot Calgary 13-5 in the middle frame for a two-period total of 23-14, Oil Kings.

Fix-Wolansky notched his second of the game to increase his season goal total to 35 and make it a 5-1 Edmonton lead, from Fyten and Will Warm, giving number 4 his well-deserved first point of the season at 6:25.

Loschiavo iced the game with his second of the night and 33rd of the season, from Matthew Robertson and Benjafield on the power play, at 13:47 to achieve the 5-1 final.

Calgary was 1-for-5 on the power play, while Edmonton finished the game going 2-for-6 with the man advantage.

The Oil Kings are back in action at 4:00 PM MT on Sunday, March 10 when they host the Kootenay ICE at Rogers Place for the final time in Kootenay’s franchise history, as the team will relocate to Winnipeg next season.