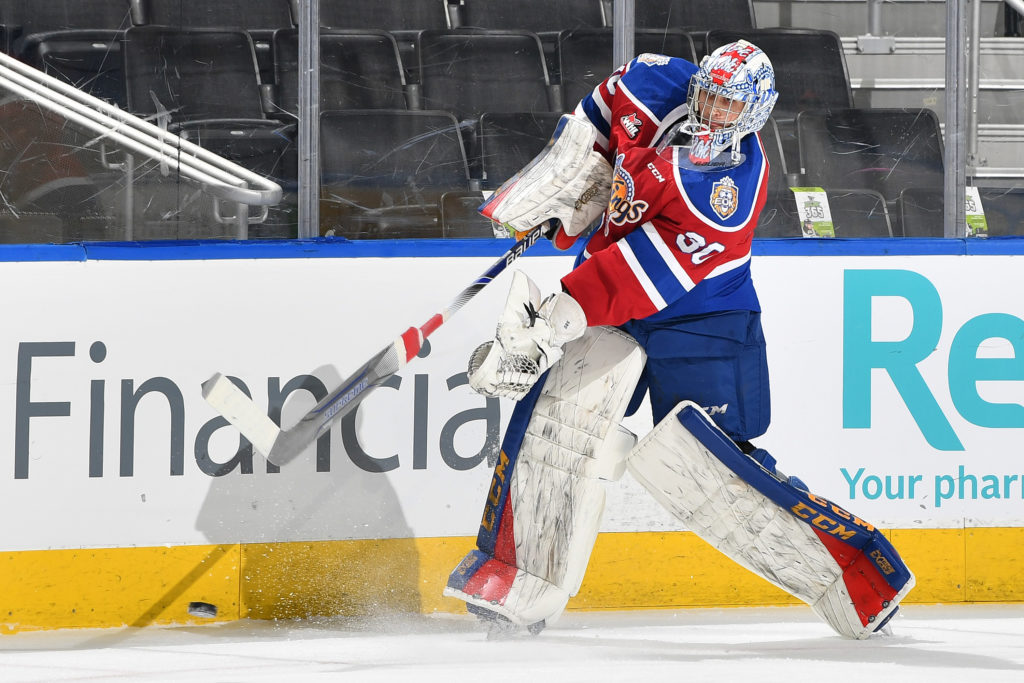 It was probably one of their best showings in the five games they’ve played in this six-game, early season trek on the road.

But unfortunately, the losing skid continues.

Although it was one of their better showings against a formidable opponent on the road trip, one area the Oil Kings lacked in was offensive opportunities, as the team was outshot 44-20, including 24-7 in the second period alone.

He wasn’t named one of the game’s Stars but he likely should have been, as Boston Bilous (2-1-0-1) was the hard luck loser in goal for his first regulation defeat. The 17-year-old youngster held the Oil Kings in the game when they were massively outshot throughout the night. He took the loss despite making 39 saves on 44 Everett shots.

Once again, special teams presented a problem for the Oil Kings. The team managed a power play goal in the second period, but allowed seven opportunities with the man advantage for the Silvertips; two of which they capitalized, including the game winning goal in the third period.

For the sixth straight game the Oil Kings surrendered the game’s first goal, as Jake Christiansen scored his second of the season to give the Silvertips a 1-0 lead, from Dewar and Bryce Kindopp, at 14:51.

It was the lone goal of the period, as the ‘Tips outshot the Oil Kings, 11-6, through the opening frame.

Intermission strategy paid off for the Oil Kings, as Conner McDonald tallied his third of the season just 53 seconds into the second to square things up, 1-1, with the lone helper to Trey Fix-Wolansky.

Approaching the midway point of the frame, the Oil Kings took a 2-1 lead on Vince Loschiavo’s eighth of the season. A nifty, no-look, behind the back pass at the goal line by Jake Neighbours found Loschiavo, who gave the team its first lead on the road trip, and first since their last win dating back to September 29 vs. the Calgary Hitmen. Fix-Wolansky picked up the secondary assist and his second point of the night on the power play goal at 9:11.

But the Silvertips would claw at the Oil Kings advantage, eventually making it a 2-2 game as Dawson Butt notched his first of the season, from Reece Vitelli at 14:35.

On their fifth power play opportunity of the night Everett finally capitalized with the man advantage, as Dewar reclaimed the lead for the Silvertips just 1:20 after the Butt goal, putting the home side up 3-2, from Riley Sutter and Christiansen to send the game into the second intermission.

The Silvertips commanded the shot clock through the middle 20 minutes by a convincing 24-9 margin.

A great shift by Andrei Pavlenko finished in a feed to fellow Belarussian Vladamir Alistrov for his second goal of the season and first in seven games, making it a tie game once again, 3-3, at 7:50 with Scott Atkinson picking up the second assist.

But the penalty bug would bite again and make the Oil Kings pay, as Kindopp registered his third of the season to once again give Everett a one-goal lead, 4-3, from Dewar and Ronan Seeley at 17:01.

An empty net goal by Dewar would give him his fourth point of the night, and the Silvertips the 5-3 win, from Sutter, at 18:19 to round out the game’s scoring.

Everett finished the night going 2-for-7 on the power play, while Edmonton was 1-for-4 with the man advantage.

The Oil Kings play the final game of their six-game road trip tomorrow night, Saturday, October 13 when they take on the Seattle Thunderbirds at 7:05 PM (MT) [6:05 PM PT] at Accesso ShoWare Center in Kent. They return home to Rogers Place on Friday, October 19 when they host the Red Deer Rebels for a 7:00 PM MT start.