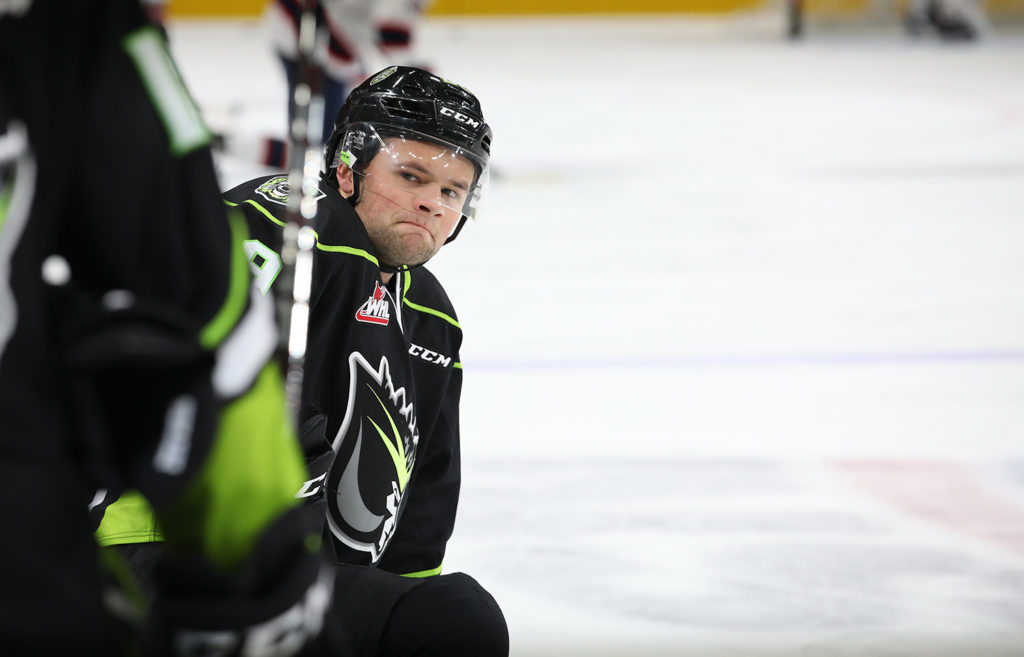 The Edmonton Oil Kings and Saskatoon Blades were ready to fight tooth-and-nail for the win, entering the third period of Tuesday’s game tied 3-3.

Then Gary Haden decided to take matters into his own hands.

It was a frustrating final 20 minutes for the Oil Kings who, after taking a 1-0 lead in the first period, battled back from two one-goal deficits to head into the third period in the 3-3 stalemate before the Blades blew things wide open.

The Oil Kings saw centre Brett Kemp enjoy some personal success on the night, however, as he joined Trey Fix-Wolansky as members of the 20-goal club this season.

Fix-Wolansky saw his current point streak extend to nine games, upping his point totals over that span to eight goals and 17 points.

Liam Keeler opened the scoring to give the Oil Kings a 1-0 lead at 9:28 of the first period, his fifth of the season from Logan Dowhaniuk and Parker Gavlas.

But exactly one minute later the game was tied, 1-1, as Chase Wouters tallied his fourth of the season, from Haden, at 10:28.

Seth Bafaro’s fourth of the season gave the Blades their first lead, 2-1, just three minutes later with an unassisted marker at 13:41, but first period scoring wasn’t done there.

Kemp’s goal made it a 2-2 game, from Fix-Wolansky and Vince Loschiavo, as the power play marker rounded out the four-goal opening frame with 2:01 left to play.

Shots on goal in the first period favoured Edmonton, 11-9.

With the Oil Kings dealt a slashing penalty near the midway point of the second period the Blades regained the lead, 3-2. Haden notched his ninth of the year, from Nolan Kneen and Dawson Davidson, but the Oil Kings responded quickly with a goal of their own.

Just 1:05 later Matthew Robertson answered for the visitors, potting his fifth of the season from Zach Russell and Jalen Luypen, closing out second period scoring at 11:10 with the sides deadlocked, 3-3.

Saskatoon held a 10-9 edge in shots in the second period for a two-period total of 20-19, Edmonton through 40 minutes of play.

It was all Blades in the third period – maybe more specifically, all Haden – as he took control of the scoresheet and the fate of the outcome in the final 20 minutes.

Haden’s second goal of the night came at 8:11 of the third period as he was left all alone in front to give the Blades back a one-goal lead, 4-3, assisted by Josh Paterson.

His 11th goal of the season completed the natural hat trick, giving the Blades their first two-goal lead of the night, 5-3, from Wouters, at 12:04.

He would add another – his fourth goal of the game – assisted by Paterson to solidify the 6-3 Blades win.

Saskatoon was 1-for-4 on the power play while Edmonton finished the night going 1-for-3 with the man advantage.

The Oil Kings are back in action tomorrow night, Wednesday, December 12 when they take on the Raiders in Prince Albert at 6:00 PM MT (6:00 PM CT). They return home to take on the Calgary Hitmen on Saturday, December 15 at 4:00 PM MT.