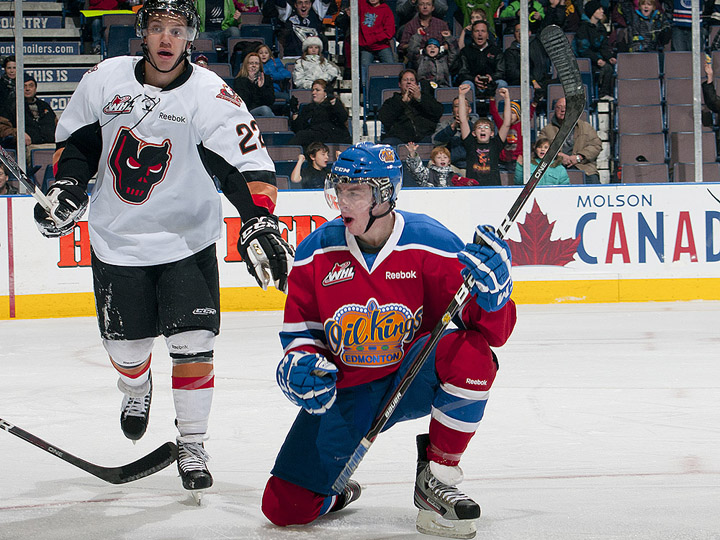 Edmonton, AB – Six different goal scorers helped the high flying Edmonton Oil Kings blast their way to their 7th win in a row on Tuesday night at Rexall Place with a 6-2 Victory over the Calgary Hitmen. The win gives the Oil Kings a record of 19-8-1-2 as they take over top  spot in the Eastern Conference for the second time this season. During this franchise best seven game winning streak the high flying Oil Kings offense has outscored their opponents by an amazing 42-12 margin.

A hot crowd welcomed the Oil Kings to the ice and Jordan Peddle was quick to bring them to their feet early on as he squared off with Spencer Humphries just 17 seconds into the first. After a solid tilt both teams came out firing and it was Stephane Legault who was the recipiant of a great feed from Mitch Moroz to tally his 9th of the season. The goal was a great welcome back for Legault who was returning to the ice for the first time since being sidelined in mid November due to illness. Minutes later the Oil King would go on the power play as Griffin Reinhart showed some great hands and wristed a shot from the top of the slot to make it 2-0 Oil Kings early in the first, the goal was Reinhart’s fifth of the season and third on the power play.

Rhett Rachinski would then add his 9th of the season, another power play goal, to give the Oil Kings a 3-0 lead less than four minutes into the second period. The hometown squad would not let up as four minutes later Edmonton would make it a 4-0 game again on the power play as Kristians Pelss wound one up from the top of the circle and snapped it top shelf chasing Calgary goaltender Chris Driedger from the net. The Hitmen would then respond on a power play of their own to make it a 4-1 game just short of the midway point in the period.

An action filled third period finally saw the red hot Dylan Wruck get on the score sheet for his ninth game in a row as he scooped a rebound and tucked home his ninth of the season to make it a 5-1 game.  Wruck’s goal extended his current point scoring streak to nine games as he is tied only with teammate Tyler Maxwell and Kootenay forward Max Reinhart for the longest current streak in the WHL. Just 21 seconds later Jordan Peddle tallied to make it a 6-1 game midway through the final period. The Hitmen would push back with another of their own to make it 6-2 but in the end it was too little too late as the Oil Kings collected their 19th win of the season.

Goaltender Laurent Brossoit tallied another win to push his record to 17-7-1-1. The Oil Kings power play posted a big number going 3 for 8 on the night while the best penalty kill in the league also showed it’s stuff as the Kings held the Hitmen to 1 for 5 with the man advantage.

The Oil Kings will be back in action and looking to extend their streak on Thursday night as they take on the Brandon Wheat Kings. This will mark the seventh game in the Oil Kings run of 11 straight games at home. Puck Drop is set for 7PM MST at Rexall Place – all games this season will be broadcast live on the TEAM 1260 and streamed live at WHL.ca

There is still a way to be here live for one of the biggest junior hockey events in the world! The Oil Kings will be releasing the last 500 Oil Kings World Junior Mini Packs THIS FRIDAY – December 9th at 10 a.m. That’s five World Jr. tournament games at Rexall Place plus 18 Oil Kings tickets over this year and next year for just $499. Choose between a Boxing Day Pack (Which includes Canada’s tournament opening game on December 26th against Finland) or a New Year’s Eve Pack (which includes Canada’s New Year’s Eve matchup against the U.S.A.) while supplies last. This limited quantity will be released for ONE DAY ONLY THIS FRIDAY! That’s the last 500 World Junior Mini Packs on sale Friday December 9th at 10 AM. Only available at oilkings.ca