MENU
THE WESTERN HOCKEY LEAGUE HAS ANNOUNCED ITS RETURN TO PLAY PROTOCOL FOR THE 2020-21 SEASON
October 6, 2018 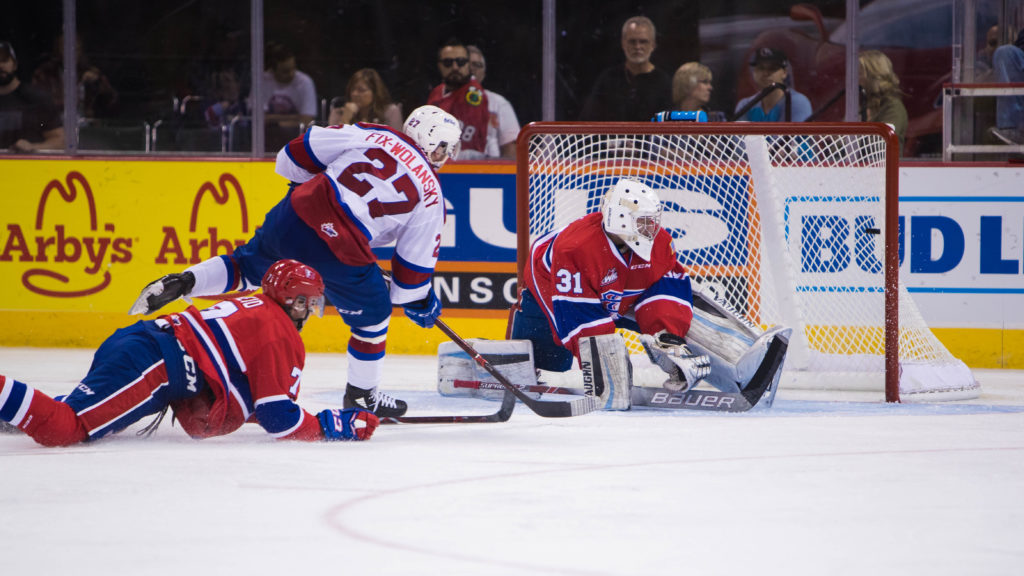 For the second straight night the Edmonton Oil Kings found themselves down a single goal late in the game.

Unfortunately for the Oil Kings, this time they weren’t able to duplicate their last-second, game-tying heroics such as they did last night in Kootenay.

The Oil Kings (5-2-0-1) are still in search of their first win on their six-game road trip as they dropped a 3-2 decision to the Spokane Chiefs (3-1-0-2) in front of 4,763 fans at Spokane Veterans Memorial Arena on Saturday night.

It was a back-and-forth affair which saw the two teams trade goals all night long, and also saw a plethora of penalties called; 15 combined between both sides.

Dylan Myskiw (3-2-0-0) manned the goal for Edmonton after Bilous tended the pipes last night in Kootenay and took the loss, surrendering just three goals on 32 shots.

Adam Beckman opened the scoring to give the Chiefs a 1-0 lead just 3:44 into the first period, from Egor Arbuzov and Ty Smith.

Brett Kemp got the Oil Kings on the board past the midway point of the period, tallying his sixth of the season from Trey Fix-Wolansky and Quinn Benjafield to make it a 1-1 game at 11:37.

With under four minutes to play in the opening frame the Oil Kings were penalized for high sticking and the Chiefs capitalized just 16 seconds into the man advantage as Jake McGrew made it 2-1 Spokane, from Eli Zummack and Smith, at 16:30.

The Oil Kings skated out of the first period with an 11-8 lead on the shot clock.

With offsetting penalties coming to both sides at 6:47, the teams skated four aside and Fix-Wolansky once again evened things up, 2-2, from Vince Loschiavo at 7:20.

Zummack’s second goal of the season would prove to be the eventual game winner, as neither side would etch the scoresheet in the final period of play. Luke Toporowski earned the lone assist on the Zummack goal to secure the 3-2 win at 14:55.

The Chiefs outshot the Oil Kings 16-8 in the second period, while shots favoured Edmonton 11-8 in the third for a game total of 32-30, Spokane.

Spokane finished the night going 1-for-3 on the power play, while Edmonton was blanked 0-for-5 with the man advantage.

The Oil Kings continue their six-game road trip Tuesday night, October 9 when they face the Tri-City Americans at 8:05 PM (MT) [7:05 PM PT] at the Toyota Center. They return home to Rogers Place on Friday, October 19 when they host the Red Deer Rebels for a 7:00 PM MT start.

Great seats are still available for all Edmonton Oil Kings home games during the 2018-19 season starting at just $20. Visit OilKings.ca or click here for more information or to purchase.