MENU
THE WESTERN HOCKEY LEAGUE HAS UPDATED ITS RETURN TO PLAY PLAN FOR THE 2020-21 SEASON
November 23, 2019 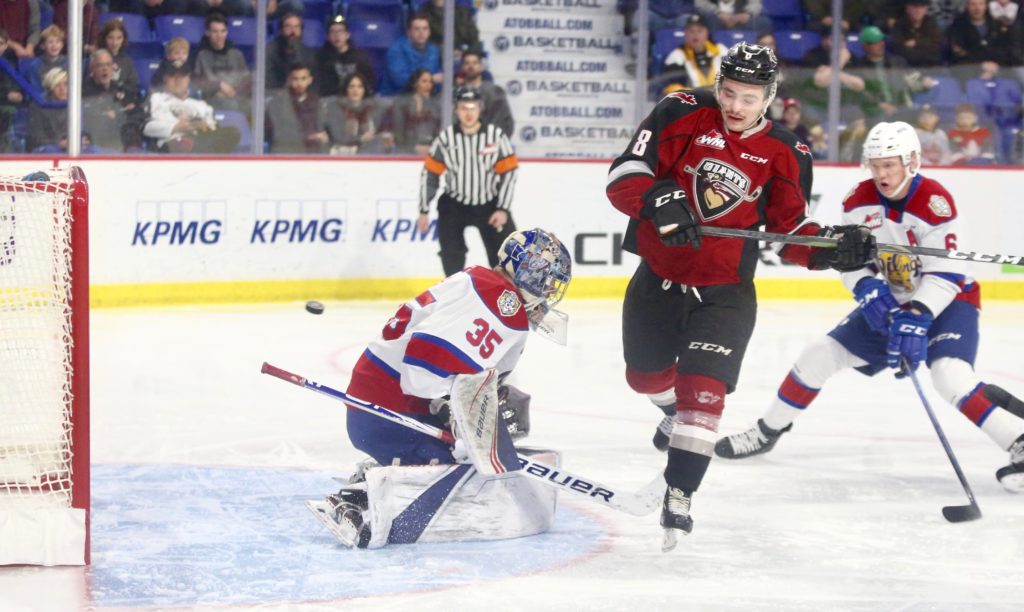 Dylan Guenther, Riley Sawchuk, Matthew Robertson and hometown kid Josh Williams were the goal scorers for the Oil Kings, in what was a penalty-filled affair that saw special teams play a pivotal role in the night’s action.

The Giants bookended the first period with goals at 3:57 and 18:56 to take a 2-0 lead into the first intermission.

The home side commanded play in the first 20 minutes, outshooting the Oil Kings, 16-8.

In the second they picked up right where they left off, adding to their lead – 3-0 – just 14 seconds in, but the visitors soon answered back.

Guenther was on the receiving end of a pass from Jake Neighbours while on the power play and cut the Vancouver lead to 3-1 at 2:18, with the secondary assist to Sawchuk.

As the end of the middle frame neared, it was Sawchuk who extended his team lead in goals to 12 to make it a 3-2 game, from Wyatt McLeod, at 17:06 which rounded out scoring after 40 minutes.

Shots in the middle frame shifted, 11-7, in favour of the Oil Kings.

Eight infractions were whistled between the two teams in the second period, but even more was to come in the third, which equated into the game-tying goal which began third period scoring.

Killing off a 5-on-3, Robertson sprung from the box while the Oil Kings were still shorthanded and registered his sixth of the season to tie the game, 3-3, from Ethan Cap at 7:22.

But special teams continued to leave its mark, this time just four seconds after the Giants were penalized for boarding, as Vancouver restored their one-goal lead, 4-3, at 8:49.

Back on the power play the Oil Kings mustered yet another comeback, this time by the Langley, BC native Williams at 12:31, assisted by Neighbours to make it a 4-4 game, which would round out regulation scoring and eventually send the game to overtime.

The Oil Kings commanded much of the 3-on-3 extra period, but a rush finished by Justin Sourdif ended the game in the Giants favour at the 2:57 mark.

Vancouver was 0-for-6 on the power play, while Edmonton was 2-for-6 with the man advantage, each team with a shorthanded goal.

The Oil Kings play game four of their five-game road trip through BC when they face the Memorial Cup host Kelowna Rockets on Tuesday, November 26 at 8:05 PM, then finish the trip in Kamloops against the Blazers on Wednesday, November 27 at 8:00 PM MT.