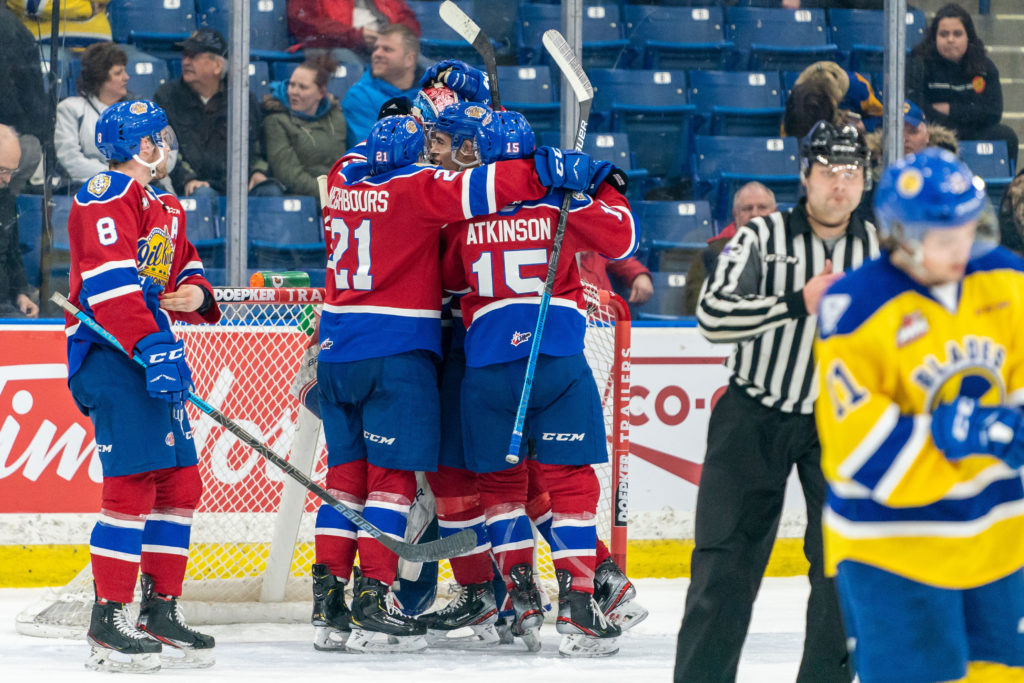 After finding themselves down 2-0 late in the second period on Saturday, they ensured they wouldn’t endure the same fate less than 24 hours later at the SaskTel Centre in Saskatoon.

Sebastian Cossa (18-3-2-1) made an impressive 31 saves in a winning effort for the Oil Kings, earning his 18th win of his rookie campaign.

Koen MacInnes (8-5-0-0) took the loss, surrendering the trio of goals on 30 Edmonton shots.

Colton Dach gave the Blades a 1-0 lead, with his older brother Kirby in attendance during the NHL’s All Star break, at 10:49 of the first period.

It was the lone goal of the opening frame, which saw the Blades edge the Oil Kings in shots, 9-8.

In the second, the Blades extended their lead to 2-0 on Evan Patrician’s third of the season at 15:44, but the Oil Kings would quickly answer back.

Just 22 seconds later number 23, Jalen Luypen, registered his eighth of the season going bardown over MacInnes, from Matthew Robertson and Jake Neighbours, to make it a 2-1 game at 16:06.

That rounded out second period scoring, this time with the Oil Kings favoured 14-13.

Near the midway point of the third, Riley Sawchuk along the boards fed Dylan Guenther in front, whose rebound found the stick of Neighbours for his 16th of the season, making it a 2-2 stalemate at 9:54.

The final goal of the game came with 5:58 remaining, as Carter Souch buried the puck past the Blades netminder but with some contention, as the back of the net raised off the ice and the puck sailed all the way to the back boards, and the play went to review.

Since the net – more so, the goal posts – were not knocked off their moorings, it was ruled a good goal, and proved to be the eventual game winner.

The Oil Kings return home to Rogers Place on Tuesday, January 28 when they host the Brandon Wheat Kings at 7:00 PM MT for United Against Cancer.