MENU
THE WESTERN HOCKEY LEAGUE HAS UPDATED ITS RETURN TO PLAY PLAN FOR THE 2020-21 SEASON
January 3, 2019 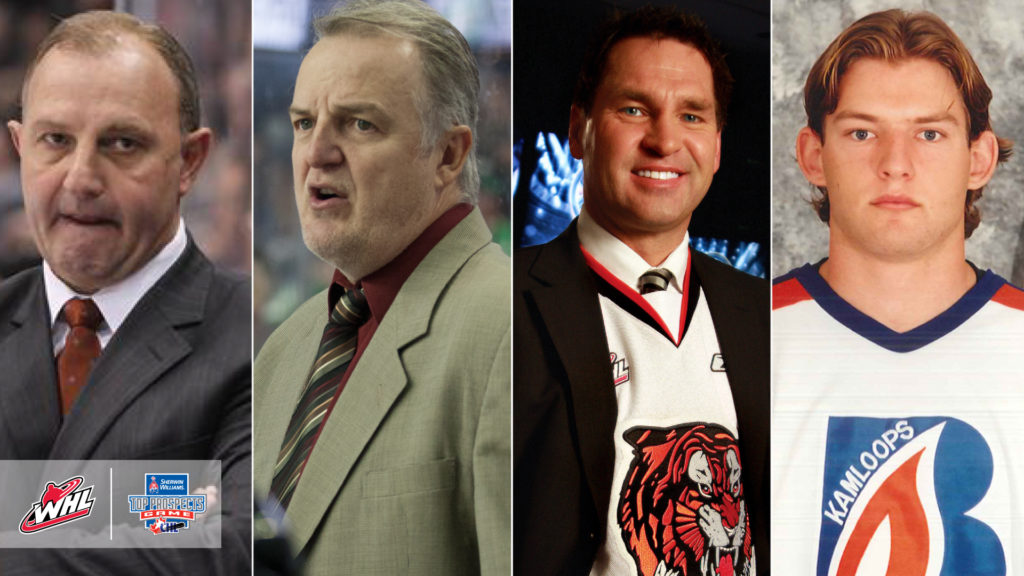 On the bench for Team Orr are the Oil Kings own Athletic Therapist Brian Cheeseman and Equipment Manager Rogan Dean.

Making the move from broadcast to bench for the 24th annual showcase of the CHL’s top NHL Draft eligible prospects are members of Sportsnet’s Hockey Night in Canada broadcast team including host Ron MacLean and analyst Kelly Hrudey.  Joining them are a pair of CHL alumni and former NHL stars in the province of Alberta including former Edmonton Oilers forward Dave Hunter and Calgary Flames defenceman Robyn Regehr.  Rounding out the coaching staffs are current WHL bench bosses Brent Sutter of the host Rebels and Marc Habscheid of the Prince Albert Raiders.

MacLean will lead Team Cherry alongside Hunter and Sutter, with Hrudey assigned to Team Orr with Regehr and Habscheid.

“On behalf of the Canadian Hockey League it is with great pride that we welcome Ron MacLean and Kelly Hrudey as head coaches of the 2019 Sherwin-Williams CHL/NHL Top Prospects Game,” said CHL President David Branch. “Their participation with alumni Dave Hunter and Robyn Regehr, and CHL coaches Brent Sutter and Marc Habscheid, will make this a special experience for the players and for the great hockey fans in Red Deer and across the province of Alberta.”

Support staff for the event also include members of the host Rebels working with Team Cherry. The 40 players selected to compete in this event will be split into Team Cherry and Team Orr and will be announced in the coming weeks. The WHL will be represented by 16 players on the ice of the 40 participating, including six players who have been given ‘A’ ratings by NHL Central Scouting on their ‘Players to Watch’ List, one of which being Oil Kings defenceman Matthew Robertson.

The 2019 Sherwin-Williams CHL/NHL Top Prospects Game is proudly supported by title partner Sherwin-Williams, and CHL associate sponsors CIBC, Kia Canada, Cooper Tires, and Kubota Canada.  The game will be broadcast live across Canada on Sportsnet and TVA Sports, and in the United States on NHL Network.

Tickets are still available and can be purchased via reddeerrebels.com or ticketsalberta.com.  For further ticket details please contact the Rebels office at 403-341-6000.

Ask Sherwin-Williams™
For 150 years, Sherwin-Williams has been an industry leader in the development of technologically advanced paint and coatings. As North America’s largest specialty retailer of paint and painting supplies, Sherwin-Williams is dedicated to supporting both do-it-yourselfers and painting professionals with exceptional and exclusive products, resources to make confident colour selections and expert, personalized service at its more than 4,000 neighbourhood stores. For more information, visit sherwin-williams.ca. Join Sherwin-Williams on Facebook, Twitter, Pinterest, Instagram, LinkedIn and Tumblr.