Dylan Guenther named WHL’s Rookie of the Month for February 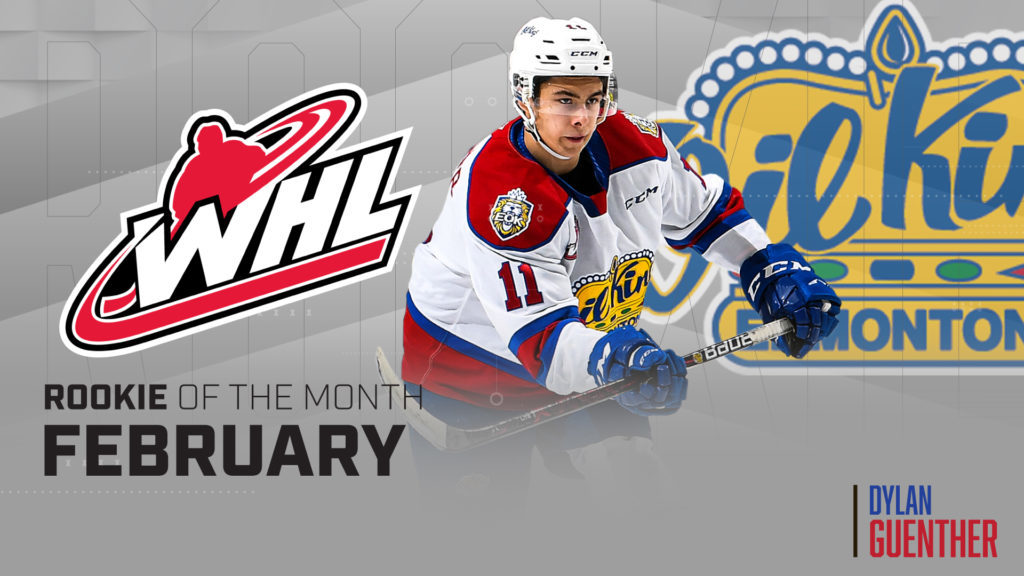 The Western Hockey League announced today that forward Dylan Guenther of the Edmonton Oil Kings has been named WHL Rookie of the Month for February, 2020.

The 16-year-old recorded 17 points (7G, 10A) and a plus/minus rating of +8 in 11 games during the calendar month. With Guenther’s contributions, the Oil Kings went 8-2-0-1 in February to strengthen their grip on the lead in the WHL’s Central Division and Eastern Conference.

Recording points in nine of his team’s 11 games, Guenther tallied five multi-point efforts, including a four-point performance against the Winnipeg ICE on February 25 at home. The game was highlighted by the first hat trick of Guenther’s WHL career. Throughout the month, Guenther was named the first star of the game twice as well as the second star of the game once. The WHL recognized him as the First Star of the Night on a single occasion.

Playing a key offensive role with the conference-leading Oil Kings, the first-overall selection from the 2018 WHL Bantam Draft has recorded 58 points (26G, 32A) in 55 games this season, including eight power play goals and three game-winning goals. Guenther ranks first in scoring and assists, and is tied for second in goals among WHL rookies.

For his WHL career, Guenther has appeared in 63 WHL regular season games, posting 62 points (29G-33A), including 10 power play goals and four game-winning goals. He also appeared in three games during the 2018 WHL Playoffs.

Guenther and the Oil Kings will return to action on Wednesday, March 4 (7:00 PM MT) when they play host to the Spokane Chiefs at Rogers Place.