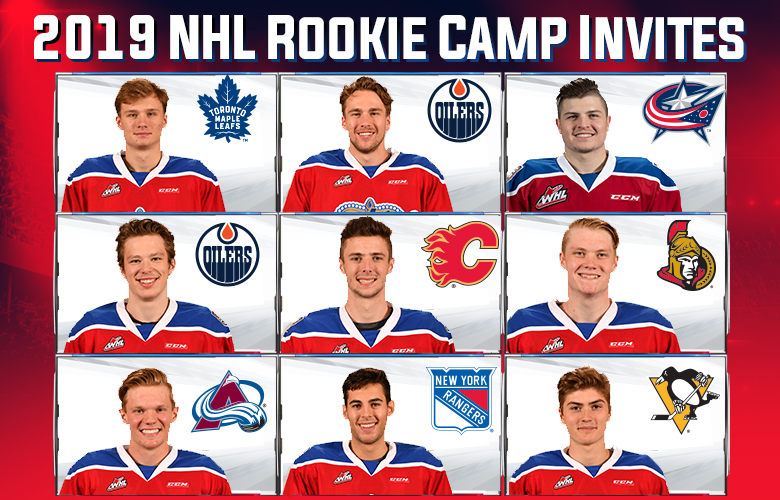 Eight current Edmonton Oil Kings, as well as graduated captain Trey Fix-Wolansky, have been invited to take part in eight different National Hockey League Rookie Camps ahead of the 2019-20 season.

Both #Oilers Rookie Camp games vs. Calgary will be streamed live on https://t.co/rKXr7PLP2B, YouTube, Facebook & right here on Twitter. Check out the full roster of Rookie Camp attendees. pic.twitter.com/PrArvtQEEn

Oil Kings teammate, right winger David Kope, will go from friend to foe as he takes part in Rookie Camp with the Calgary Flames. He’ll take on Keeler, Cap and the rest of the Oilers Rookie Camp participants when they meet for two pre-season games – one in Red Deer, AB – and both streamed online.

HOCKEY IS HERE! 🎉#Flames Prospect Camp begins this Thursday, Sept. 5, and includes a pair of games against the Oilers Rookies on Saturday, Sept. 7 in Red Deer & Tuesday, Sept. 10 at the ‘Dome. https://t.co/DOTkYBFgli

***
Defenceman Matthew Robertson is one of four Blueshirts’ selections from the 2019 NHL Draft – Kaapo Kakko, Karl Henriksson, and Hunter Skinner – who will take part in the New York Rangers Rookie Camp, which includes taking part in the annual Traverse City Tournament.

This season, #NYR will make their 13th straight appearance in the 8-team tournament.

Also competing in the Traverse City Tournament is left winger Vladimir Alistrov, who was a free agent invite to Rookie Camp with the Toronto Maple Leafs.

🚨 Hockey is back next weekend! This is not a drill! 🚨

See who’s heading to Traverse City for the 2019 Prospects Tournament which opens Sept. 6 against the Blues. pic.twitter.com/GgUJVQYdqc

The Columbus Blue Jackets will also take part at Traverse City, which means so will right winger Trey Fix-Wolansky, who signed his entry-level contract with the Blue Jackets last season. A total of eight teams will compete; the Chicago Blackhawks, Dallas Stars, Minnesota Wild, St. Louis Blues and Detroit Red Wings, along with the Blue Jackets, Maple Leafs and Rangers.

***
Defenceman Wyatt McLeod has been invited to take part in Rookie Camp with the Colorado Avalanche. He will take part in the Anaheim Rookie Faceoff from September 7-10, which will also see rookies from the Ducks, Arizona Coyotes, Los Angeles Kings, San Jose Sharks and Vegas Golden Knights.

***
Right winger Josh Williams is off to join the Pittsburgh Penguins Rookie Camp, which will also mean taking part in a Prospects Challenge hosted by the Buffalo Sabres from September 6-9. Other teams participating include the Boston Bruins and New Jersey Devils.

The battle to impress is on.

Penguins prospects will compete against other NHL hopefuls from the Bruins, Devils, and Sabres at the annual Prospects Challenge in Buffalo. Schedule and roster: https://t.co/G82SDYNO6Xpic.twitter.com/jUmChqQy7s

***
The Ottawa Senators extended a free agent invite to defenceman Conner McDonald, who will face-off against young guns from the Winnipeg Jets and Montreal Canadiens in the Senators annual Rookie Showcase Tournament taking place in Belleville, ON from September 6-9. The games are set to be broadcast on TSN.ca.