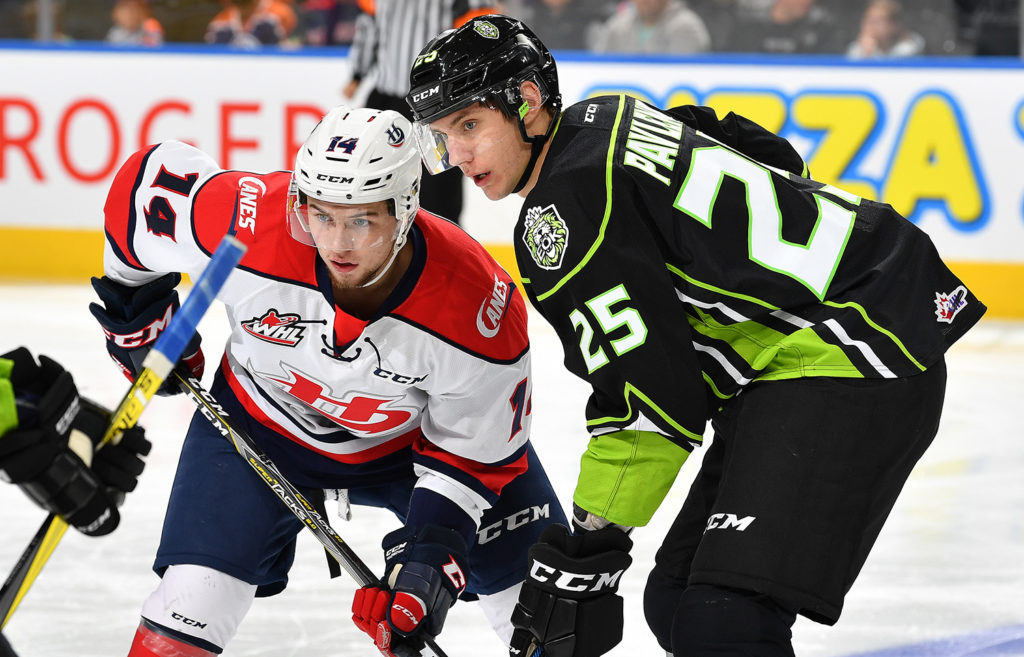 The Edmonton Oil Kings and Lethbridge Hurricanes meet for the fourth time this season this afternoon at Rogers Place. The Oil Kings have earned points in all three previous games (2-0-0-1), earning a pair of wins on October 28 (6-3) and November 12 (6-4) before falling in a shootout, 3-2, on November 16.

Edmonton entered the weekend having picked up points in ten of their last 11 games (7-1-2-1) prior to a 3-2 regulation loss to the Victoria Royals here on Friday night. The loss also served as an end to a seven-game win streak on home ice for the Oil Kings. Prior to that, their last loss on home ice was November 30 vs. the Moose Jaw Warriors.

Today marks the beginning of a stretch of six straight games vs. Central Division opponents for the Oil Kings. They take on the Hurricanes three times in the next eight days (including today), as well as the Medicine Hat Tigers twice along with the Calgary Hitmen once. The six games will play out over the course of the next 14 days.

Oil Kings defenceman Will Warm made his long-awaited return to the line-up Friday vs. the Victoria Royals. The 19-year-old played just five games to start the season before suffering a lower-body injury on September 29 which caused him to miss 35 games.

A pair of Oil Kings forwards are nearing their 300 regular season games played mark. Quinn Benjafield (inj.) sits at 295 games played, while Vince Loschiavo (291) could hit the milestone as early as January 29 vs. the Brandon Wheat Kings.

Oil Kings defenceman Matthew Robertson remains day-to-day after being involved in a collision near the end of the first period in last Saturday night’s game vs. the Red Deer Rebels. Robertson has registered five goals and 16 assists for 21 points in 32 games played this season.

Edmonton has not lost in regulation when leading after 40 minutes of play (15-0-2-1). The Oil Kings have been outshot 13 times this season and have still managed to earn points in more than half of those games (5-6-1-1).

The Oil Kings have scored the first goal of the game in 23 of their 41 games played this season. After starting the season 12-0-0-0 when scoring the game’s first goal, they are now 17-4-1-1 when taking the first lead.

Oil Kings defenceman Matthew Robertson has been selected as one of 16 WHL players to participate in the 2019 Sherwin-Williams CHL/NHL Top Prospects Game in Red Deer on January 23. Oil Kings Athletic Therapist, Brian Cheeseman, and Equipment Manager, Rogan Dean, have been selected to staff Team Orr.

Six Oil Kings players were featured in the latest NHL Central Scouting ‘Players to Watch’ List for the upcoming 2019 NHL Draft. The Oil Kings led all WHL teams with six rated players (A – Matthew Robertson (inj.); C – Jacson Alexander (inj), Vladimir Alistrov, Brett Kemp (inj.), David Kope and Boston Bilous). They are one of just two teams in the League to have each a forward, defenceman and a goaltender make the list.

Oil Kings Belarusian imports Andrei Pavlenko and Vladimir Alistrov earned silver at the 2019 IIHF U20 World Championships, Division I – Group A in Germany last month. They skated to a 3-2 record in the tournament, which was won by host Germany. Alistrov tallied a pair of goals and six points for Belarus.