MENU
THE WESTERN HOCKEY LEAGUE HAS UPDATED ITS RETURN TO PLAY PLAN FOR THE 2020-21 SEASON
October 8, 2019 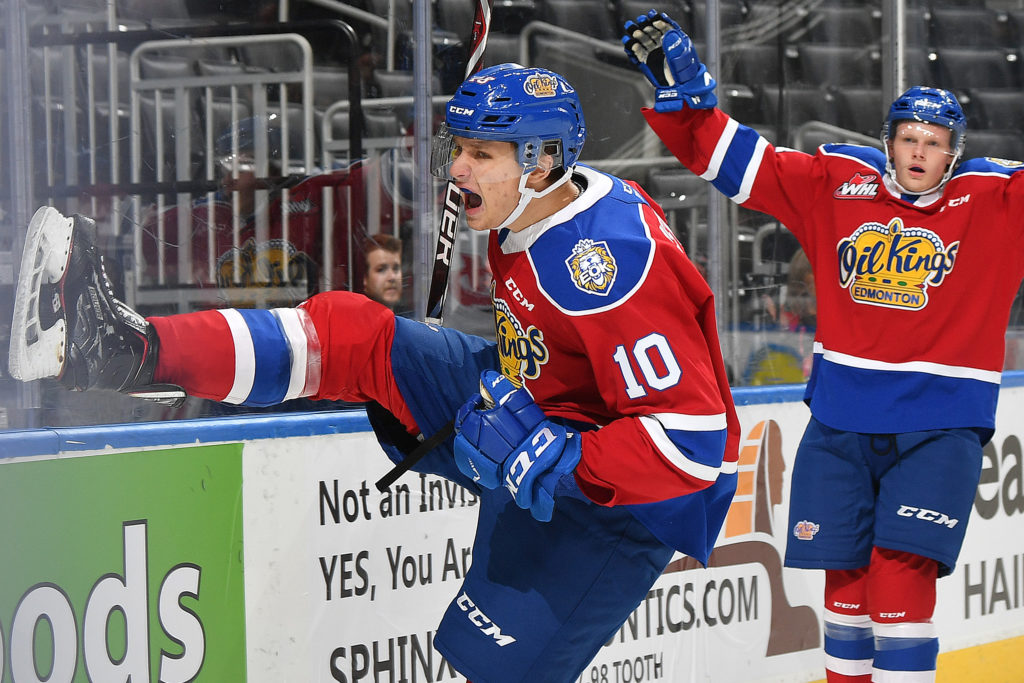 Tonight you can call them the Comeback (Oil) Kings.

The Oil Kings found themselves in the early hole after a bad bounce, a cluster in front of the net, and a last minute goal gave the host Pats the lead after 20 minutes of play.

But the visitors played the long game and bounced back with a pair of goals in the second and a trio in the third to seal their third straight win.

Once again the Oil Kings relished the depth of a balanced attack, as five different goal scorers etched the scoresheet. In fact, 12 of the 18 skaters dressed registered a single point in the win.

It was Sebastian Cossa who got the nod for his second career start, but after making eight saves on 11 Regina shots, head coach Brad Lauer elected to make the switch between the pipes and Scott stood tall, backstopping the team to victory with just seven combined saves over the final 40 minutes of play.

Max Paddock (1-4-0-0) took the loss in goal for the Pats, surrendering those five goals on 39 total shots; seven in the first, followed by 16 in both the second and third periods by the Oil Kings.

Regina opened the scoring on what was a deflection in front of Cossa, as the puck bounced off an Edmonton defender and into the net at the 4:02 mark of the first.

Just 1:32 later with action once again in the Edmonton zone, traffic in front of the Oil Kings netminder appeared to impede Cossa but ultimately ended with the home side staking claim to a 2-0 lead.

With just 13 seconds left in the opening frame the Pats added on, as they capitalized on a failed clearing attempt by the Oil Kings with time winding down to take a 3-0 lead into the dressing room after 20 minutes.

Shots on goal in the first favoured Regina, 11-7.

Scott entered the game in replace of Cossa to begin the second period, and less than five minutes in, the Oil Kings began to claw away at the three-goal deficit.

Keeler notched his third of the season to get the Oil Kings on the board, 3-1, with the lone assist to Jacson Alexander at 4:02.

The Oil Kings suffered a setback just over three minutes later as they were assessed a four-minute double minor, but the penalty killers stymied the Pats power play to keep Edmonton to within two.

Just over four minutes after the double minor was killed, Luypen shifted the sights from defence to offence, tallying his first of the season at 14:28, from Ethan Cap and Brendan Kuny – the right winger from Ardrossan’s first WHL point.

The Oil Kings began the third period with 57 seconds of power play time after the Pats were whistled for roughing near the end of the second.

Just 28 seconds into the third – and with 29 seconds remaining with the man advantage – Alistrov tied the game, 3-3, with his fourth goal of the season and sixth point in his last five games (4G, 2A). Carter Souch and Conner McDonald picked up the helpers.

Only 1:01 later, McIndoe’s first career goal as an Oil King also doubled as the eventual game winner as he gave his team the go-ahead, 4-3, on a feed from Riley Sawchuk at 1:29.

Near the midway point of the third, Jake Neighbours made a pretty play at the blue line to give the Oil Kings possession in the Regina zone. Driving to the net but flanked by a pair of Pats defenders, he made a sprawling pass and shoveled the puck to a wide-open Guenther who secured his second of the season, and the 5-2 win.

Final shot on goal were 39-18, Edmonton, which included a dominant 16-2 margin by the visitors in the final 20 minutes.

Regina was 0-for-4 on the power play while Edmonton went 1-for-5 with the man advantage.

The Oil Kings play the final game of their five-game road trip when they face the Moose Jaw Warriors tomorrow, Wednesday, October 9 at 7:00 PM MT. Their next home game at Rogers Place is Saturday, October 12 when they host the Calgary Hitmen at 7:00 PM MT.