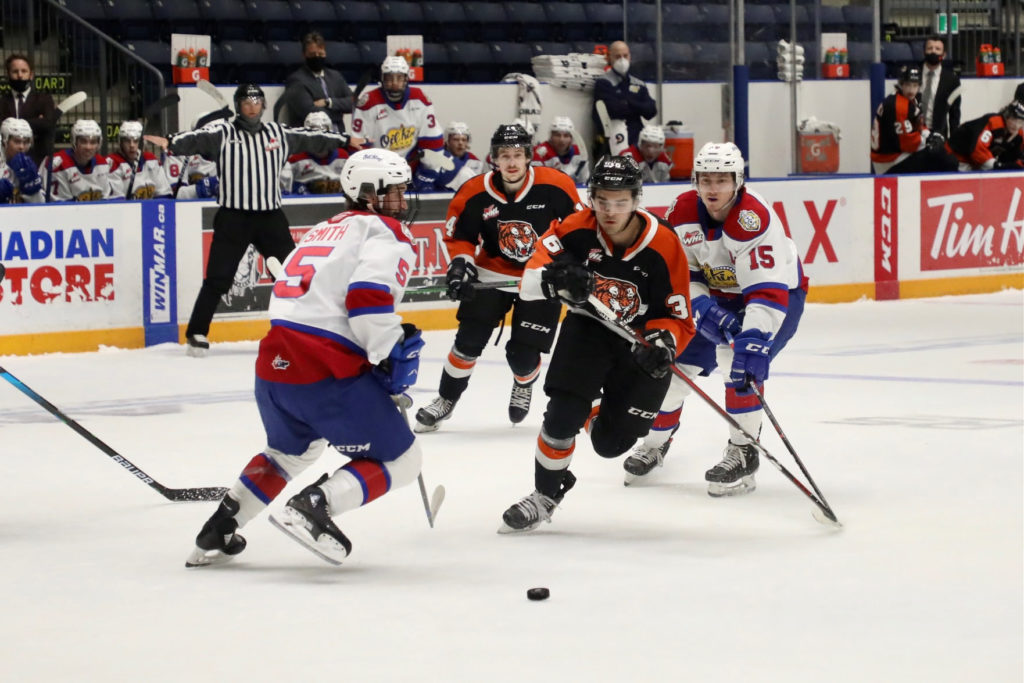 The Oil Kings and Tigers skated in a fast paced first period filled with scoring chances, great goaltending from both Sebastian Cossa and Garin Bjokrlund, and the only goal provided by Oil Kings captain Scott Atkinson, setup by Ethan Cap in both players’ final game in an Oil King’s uniform. With 10:26 left to go in the opening frame, Cap skated the puck into the Medicine Hat zone down the right-wing wall, hooked a pass to Atkinson in the high-slot, who turned around to retrieve it, spun and fired a shot over the right-arm of Bjorklund for his sixth goal of the season.

The second period picked up right where the first left off with both teams in full flight and both goaltenders continuing to be rock solid. Late in the middle period the Tigers took a pair of penalties and after the Oil Kings came up empty on their first man-advantage, Logan Dowhaniuk was able to cash in on their second with a dazzling individual effort for his fifth goal of the season. Dowhaniuk grabbed a loose puck in the netutral zone, sped through the checks of three different Medicine Hat penalty-killers in the middle of the ice and snapped a shot over the right-pad of Bjorklund from between the hash-marks to give the Oil Kings a 2-0 lead after 40 minutes of play.

The Tigers would push to try and get back into the game in the third period with their best chance to break the shutout of Cossa coming 4:30 into the period after Oren Shtrom was setup on a backdoor play only to be robbed by a sprawling Cossa and his left pad. Kaid Oliver, playing in his final game in the WHL, sealed up the Edmonton win with his 11th goal of the season with just 48 seconds left on the clock, firing home an empty-net tally from his own blue line.

Cossa finished the night making 29 saves for his fourth shutout of the season. The Oil Kings went 2-for-3 on the power-play while the Tigers were 0-for-4.