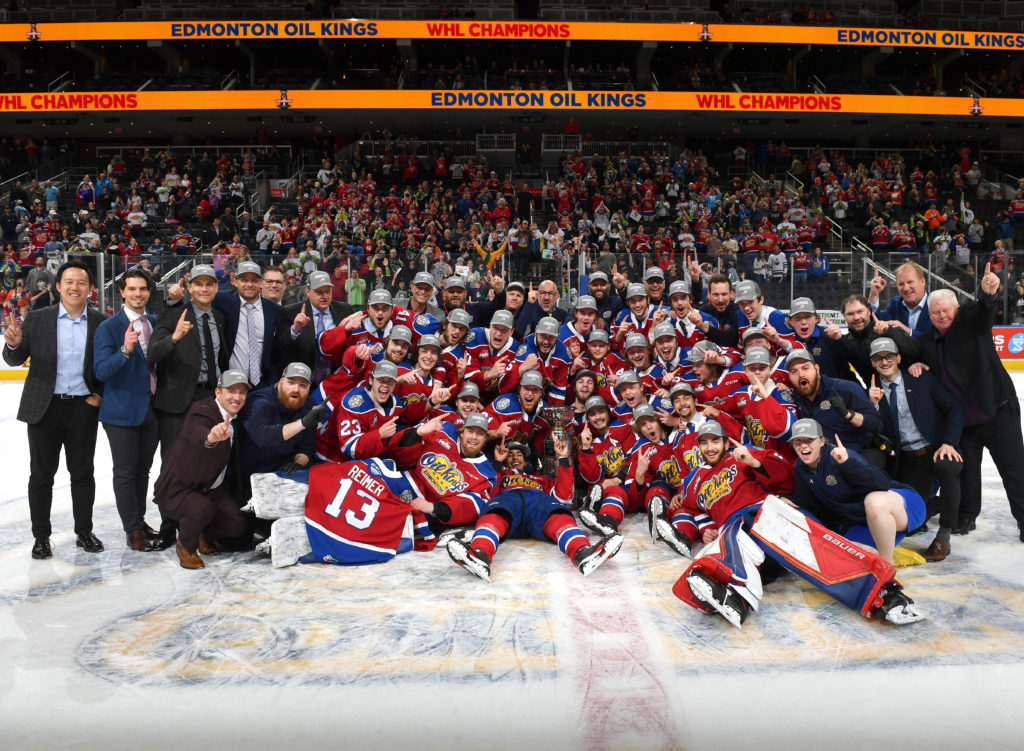 The Oil Kings came out of the gates flying and dominated the first period.  The team was energized early thanks to the return of forward Jaxsen Wiebe, who’d missed the last three games with injury, as he doled out two huge hits on his first couple of shifts of the game.

Jakub Demek cashed in the only goal of the first period at the 7:15 mark on an Edmonton power play after he stuffed home a rebound after Jake Neighbours found Josh Williams open in front with a perfect shot-pass that Thomas Milic made the initial save on, but had the puck lead threw him to Demek.

The Oil Kings outshot the Thunderbirds 21-4 in the first period.

In the second period, Kaiden Guhle furthered the Edmonton lead after Neighbours was able to shrug off a check in the right-circle of the Seattle zone, he found Guhle open in the high-slot where he zipped it past a screened Milic for his eighth of the playoffs.  The goal set a new Oil Kings franchise record for most goals in a single post-season by a defenceman.

The Thunderbirds were able to generate 12 shots in the second period but could not solve Cossa as Edmonton took a 2-0 lead into the third period.

In the third period, Cossa steered the ‘ship home stopping all 11 shots flung his way to give the Oil Kings their third WHL Championship in modern franchise history

Cossa finished the night making 27 saves for his fifth shutout of the post-season, tying Laurent Brossoit for the most shutouts by an Oil Kings goaltender in single post-season, Milic made 34 saves for the Thunderbirds.  Edmonton went 1-for-4 on the power play, Seattle was 0-for-6.

Kaiden Guhle was named the WHL Playoffs MVP after putting up 16 points (8G, 8A), 10 penalty minutes and a +17 plus/minus rating.

Next up, the Oil Kings open their Memorial Cup schedule on Tuesday, June 21 in Saint John, New Brunswick when they take on the QMJHL Champion Shawinigan Cataractes at 4:00 PM MT.