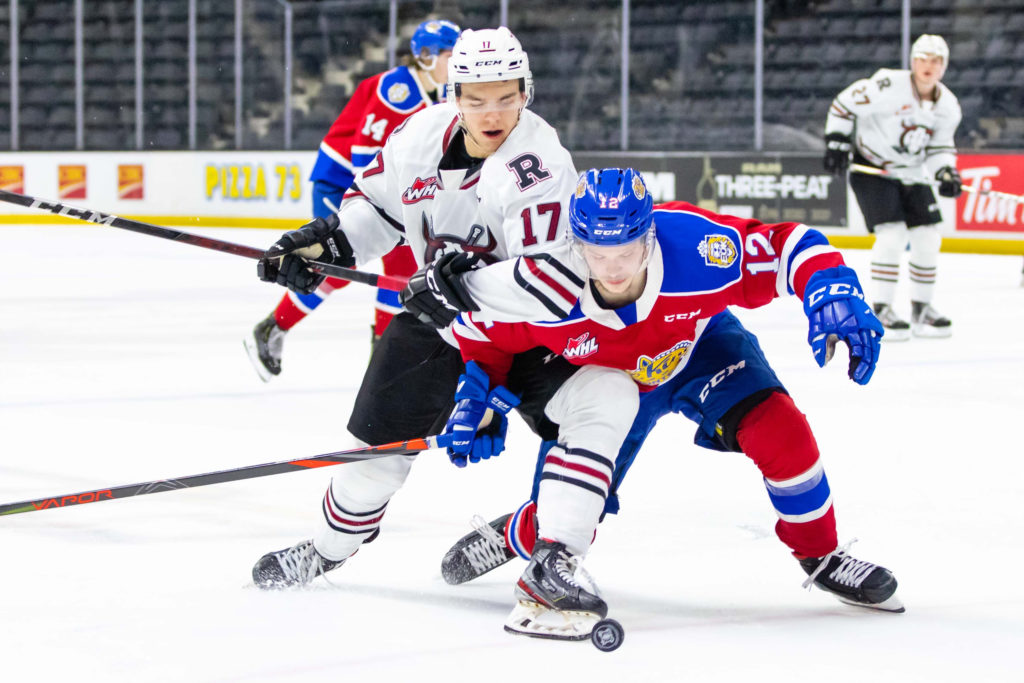 “It’s definitely rare,” said Oil Kings Assistant Coach Luke Pierce on his team’s season high goal scoring output. “We’ve seen some pretty bizarre scores this year but it was nice to be on the right side of it. It wasn’t looking good at the start but happy for the guys and able to have some different guys scoring some goals.”

“His shot is lethal, when he gets it off, he gets it off quick,” said Pierce on his third-year defenceman’s record setting night. “I think it’s been building for some time, he’s had some chances and opportunities. He was feeling it today, he was jumping up ice and looked like he really wanted to be a part of the game and it’s fantastic for him and something we can build from.”

“We can score in different ways,” added Pierce on his team’s success on the power-play. “You see the obvious ones with the one-timers from Dylan (Guenther) and Jake (Neighbours) or Willy (Josh Williams) popping high, but tonight we score on a shot-tip and that second unit getting three with a shot from the top and a seam play; it’s a lot of different ways to score and I think that’s what makes our power play dangerous.”

The Rebels jumped on the Oil Kings early with Keaton Sorensen having a shot from Dallon Melin pinball off his leg and past Sebastian Cossa to make it 1-0 Rebels just 2:35 into the game. The Rebels added to their lead on a power play just before the midway mark of the period with Josh Tarzwell spotting an open Chris Douglas in the left wing circle for a one-timer that he made no mistake on. It looked as though the Oil Kings would head to the first intermission down a pair of goals but a late power-play for the visitors would change the complexion of the game. With just 43-seconds left in the period, Josh Williams re-directed a Jake Neighbours shot-pass in the slot up over the shoulder of Byron Fancy to cut the Oil Kings deficit in half heading into the break.

The late man-advantage marker sparked the Oil Kings coming out of the intermission as just 22-seconds into the middle frame, Robertson took a sweet cross-ice feed from Jake Neighbours and deposited into the back of a wide-open Rebels cage for his second tally of the season, tying the game at two. Jalen Luypen gave the Oil Kings their first lead of the game at the 5:55 mark, one-timing a Carter Souch pass from the right-circle on another Edmonton man-advantage for his seventh goal of the campaign. The Oil Kings power-play would connect one more time in the period with Carson Latimer tipping a Dowhaniuk shot from the top of the right-wing circle between the legs of Fancy for his third goal of the season.

“It’s sounds pretty basic but we got back to playing the way we’re suppose to play,” said Pierce on his team’s turnaround from the first period to the second. “I thought in the first we didn’t have any second efforts, we weren’t reloading as fast as we needed to, late on forechecks and weren’t supporting pucks. We talked about it in the first (intermission) to get back to the habits and things we needed to do, and the proof was in the pudding.”

The Oil Kings put the game out of reach in short order in the third period scoring four goals in the span of 72-seconds just over four minutes into the last stanza. Souch scored his first of the year knocking in a Williams rebound off a two-on-one rush after Fancy made a great initial sprawling save on a cross-ice pass. 29-seconds later, Ethan Peters scored his first career WHL goal with a high-slot missile that went off the crossbar and in, ending Fancy’s night after he surrendered six goals on 31 shots.

“You saw the reaction from our bench, he’s been a really popular teammate for us early on,” said Pierce on his rookie defenceman’s milestone. “He’s played a really steady game as a first-year kid and he’s giving us some valuable minutes.

“He’s got a similar shot to Logan (Dowhaniuk) with that sneaky release and he’s been working on getting it away a little quicker and harder and it was a beautiful shot.”

Ethan Anders replaced Fancy in the Rebels crease and would be welcomed to the game by Jake Neighbours who strolled into the offensive zone, backed off the Rebels defenceman and snapped a shot over the glove of the Red Deer goalie to extend the Oil Kings lead to 7-2 with his fifth goal of the season just 12-seconds after the Peters goal. Dowhaniuk capped the 72-second surge snapping a low shot past Anders on a nifty backhand setup by Williams on a close-in two-on-one rush. Dowhaniuk would then put a bow on his, and his team’s, big night with 10:02 left on the clock, hammering home the team’s fourth power-play marker from the middle of the blueline.

Between the pipes Cossa stopped 18 of the 20 shots he faced from the Rebels to run his personal record to 9-0-0-0 on the season. The Oil Kings outshot the Rebels 42-20.

The Oil Kings and Rebels clash again Saturday afternoon at 2 PM at the Downtown Community Arena. Catch the action at oilkings.ca/radio