MENU
NEXT HOME GAME: FRIDAY, OCTOBER 29 vs Winnipeg ICE at 7PM MT
Please review the HEALTH & SAFETY REQUIREMENTS prior to your next visit to Rogers Place
October 6, 2021 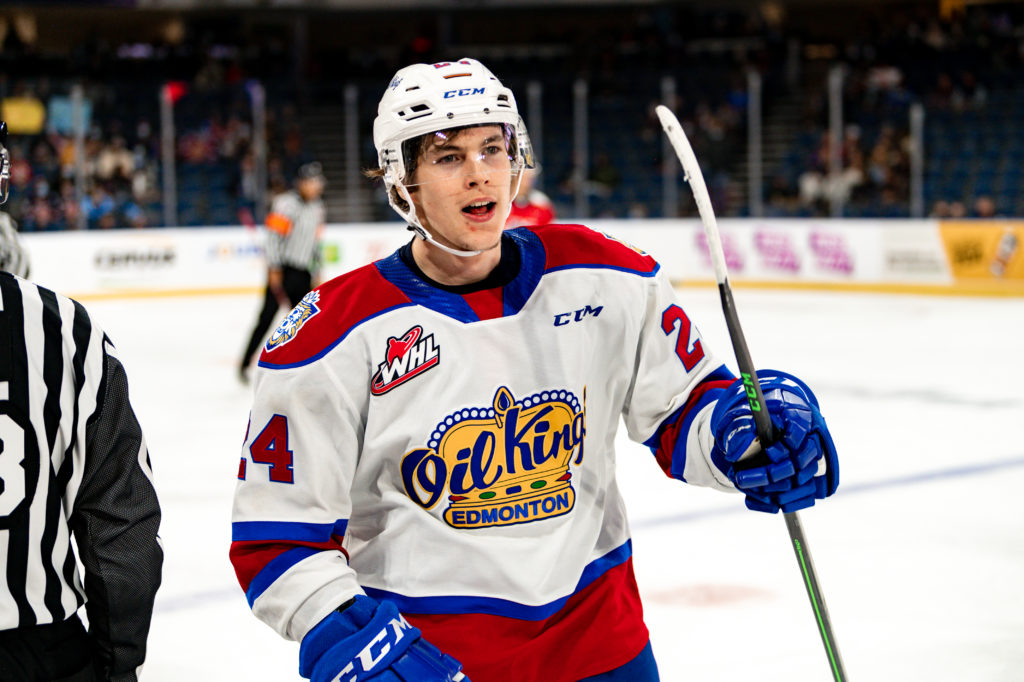 Lethbridge, AB – The Edmonton Oil Kings (2-1-0-0) got a late goal from Logan Dowhaniuk to slip past the Lethbridge Hurricanes (2-1-0-0) by a 2-1 score on Wednesday night at the Enmax Centre.

It’s safe to say, the Oil Kings and Hurricanes wanted to use the opening 20 minutes to just feel each other out.  When the horn sounded to end the first period, the scoreboard was left blank, and the team’s combining for just 13 shots on goal, seven for Lethbridge and six for Edmonton.

That being said, the Oil Kings did create the best scoring chance of the frame in the waning seconds after Dylan Guenther got in on a shorthanded forecheck, stripped the Hurricanes of the puck and centered to a wide-open Tyler Horstmann who one-timed the puck past Bryan Thomson, but rang it off the post.

The second period saw the play start to open up with both teams trading chances in the opening half of the stanza, but both goaltenders continued to stand their ground.  Carter Souch had the best opportunity to break the scoreless dead-lock after he was sprung on a breakaway, but couldn’t elevate a backhand over the glove of Thomson.

It looked as though both teams would once again head to the intermission scoreless, but Jalen Luypen had other ideas.  With just 15 seconds left on the clock and his team shorthanded, Luypen won a defensive zone faceoff, and was dished a pass at center-ice sending him in on an odd-man rush where he skated into the left-wing circle, and snapped a shot under the glove of Thomson to give Edmonton a 1-0 lead with just 1.1-seconds left in the period.

In the third period, the Oil Kings were almost gifted a two goal-lead after Tyler Horstmann picked off an outlet pass in front of the Lethbridge net, but couldn’t stuff the puck home.

The Hurricanes finally solved Oil Kings goaltender Sebastian Cossa with just over eight minutes gone by in the final period.  Rookie Hurricane forward Yegor Klavdiev skated into the Oil Kings zone and lasered a pin-point accurate shot over the left-pad of Cossa to square the game at 1-1.

It looked as though 60 minutes would not be enough for these two teams to decide a winner tonight, but as the clock bled under three minutes left in regulation, Horstmann and Dowhaniuk combined for some late game heroics.  Horstmann galloped into the attacking zone down the right-wing boards, feathered a backhand onto the Lethbridge net causing a juicy rebound that Dowhaniuk pounced on for the game winning goal at the 17:42 mark.

Cossa stood tall once again for the Oil Kings, kicking aside 23 of the 24 shots flung his way, earning first-star honours.  Thomson made 27 saves in the losing cause.  The Oil Kings finished the night 0-for-2 on the power play, while the ‘Canes went 0-for-4.

The Oil Kings are back in action on Friday night when they pay a visit to the Swift Current Broncos at 7:00 P.M., you can listen to the game live at oilkings.ca/radio.