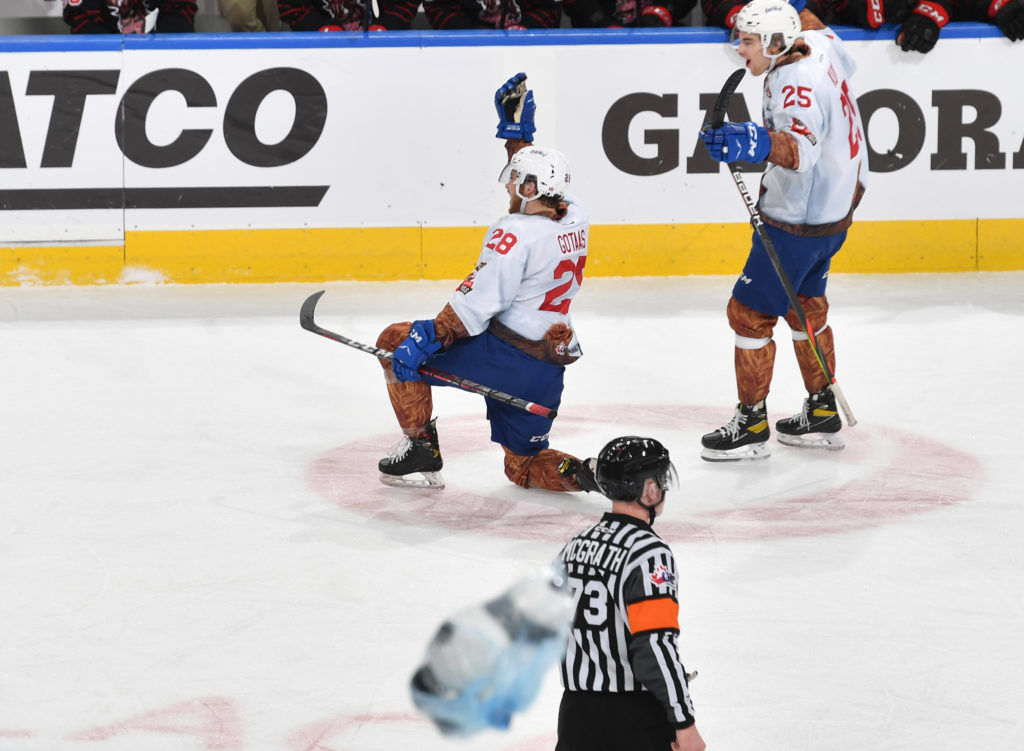 Edmonton, AB – Graydon Gotaas scored the goal of a lifetime on Saturday night as he hit the Edmonton Oil Kings record book as the team’s 14th Teddy Bear Toss goal scorer in franchise history in his first career game in an Oil Kings uniform.

After spoiling a Teddy Bear Toss down the QEII a night previous, the Warriors picked up right where they left off getting two goals from Logan Doust and Eric Alarie in the opening 10:47 of the first period to get the visitors a quick 2-0 lead.

However, the two quick ones by the Warriors, mixed with a large crowd’s anticipation of a Teddy Bear Toss goal, didn’t cause the Oil Kings to start squeezing their sticks a little tighter, well at least not Gotaas who capped a whirlwind 24 hours for himself by sending the Oil Kings faithful into a frenzy at 13:47 of the first period.

After getting recalled from the Camrose Kodiaks (AJHL) late last night, Gotaas was inserted into the Edmonton lineup for the first time since being acquired from the Prince Albert Raiders on October 17.  After Jacob Boucher helped win an offensive zone faceoff back to him, Gotaas loaded and fired a point-shot from the left side of the Warriors zone that eluded Moose Jaw goaltender Jackson Unger to bring 12,409 teddy bears over the glass and onto the ice.

With the Teddy Bear Toss festivities concluded, the Oil Kings then got down to business, as Jake Neighbours would tie the game just 35 seconds later (hockey time, about 25 minutes of real time) with an incredible individual effort.  The St. Louis Blues prospect lugged the puck over the Moose Jaw blueline, took on no less than four defenders and emerged with the puck lifting it in on his forehand.

The Oil Kings weren’t done there in the first, as just 1:04 later they would grab their first lead of the game after Luke Prokop jumped onto a loose puck in the slot and zipped it past Unger.

In the second period, the momentum would swing in both team’s favour on more than one occasion.  First it would be the Warriors getting a tying goal after Alarie was the benefactor of a favorable bounce at the side of the Edmonton net for his second goal of the night at 8:18.

Josh Williams restored the Edmonton lead 2:41 later after he finished off some pretty passing with a one-timer from the slot on an Oil Kings power play.

The Warriors would answer again, and this time it was Jagger Firkus equalizing the score as he was able to bust in behind the Edmonton defence and elevate a puck top-shelf on a breakaway at 14:46 of the middle stanza.

The Oil Kings though, undeterred by the push back of the Warriors, put their foot down in the final 3:20 of the period scoring three times to take a 7-4 lead into the third period.

Dawson Seitz tipped in a Simon Kubicek point-shot for his second goal of the season, which was followed by a Jakub Demek diving back-door tip in on a pass from Williams on another Edmonton power play just 49 seconds later.  Neighbours finished off the goal scoring with his second of the night as he was able to push the puck across the goal line during a scramble in the Moose Jaw crease.

The Oil Kings went into cruise control in the third period and skated away with the 7-4 victory.

Sebastian Cossa earned his seventh straight win making 27 saves in the Edmonton crease while Jackson Unger took the loss after recording 37 saves.  The Oil Kings went two-for-four on the power play, the Warriors were zero-for-five.

Next up, the Oil Kings venture east to kickoff a 3-game Manitoba road trip starting Wednesday in Winnipeg against the ICE at 6:00 PM.

The Oil Kings next home game is Friday December 17 when they welcome the Swift Current Broncos to Rogers Place at 7:00 PM.