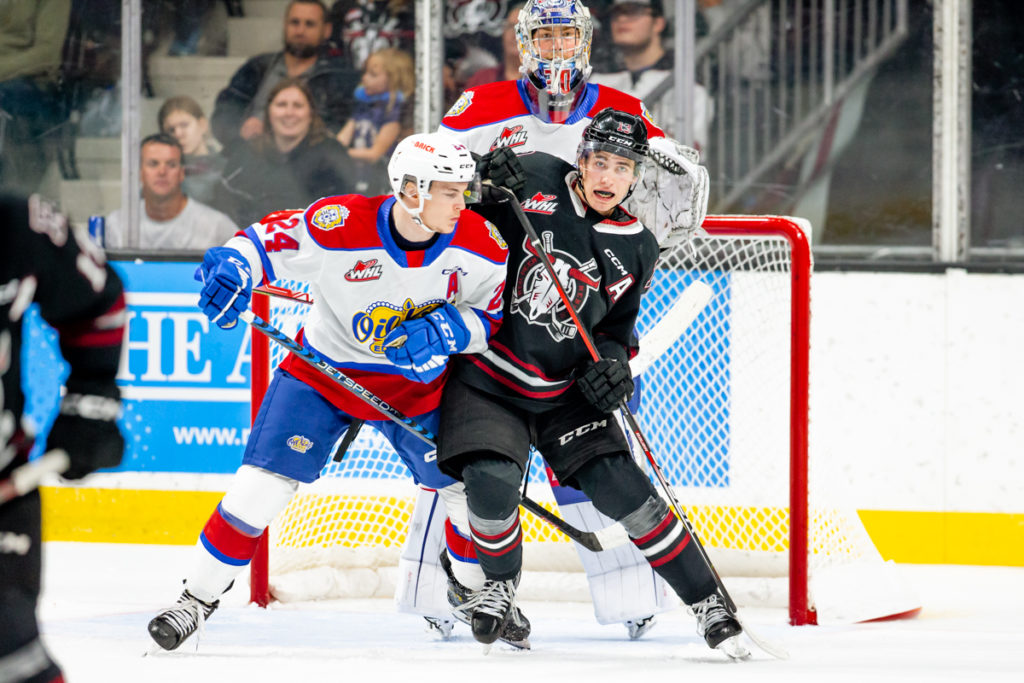 The Rebels jumped on the Oil Kings quickly with two early goals from Hunter Mayo and Frantisek Formanek just 6:28 into the game.

Mayo’s goal came on a power play as he sifted in a shot from the top of the left-circle in the Edmonton zone which was then followed by Formanek a short-time later tipping in a centering pass from Jace Isley on an odd-man rush.

The Oil Kings worked their way back to even before the period was out getting goals from Shea Van Olm and Logan Dowhaniuk.

At the 8:13 mark of the first, Van Olm got Edmonton on the board after he redirected home a shot from Dowhaniuk from the left-wing boards in the Red Deer zone.  On the goal, Oil Kings forward Treycen Wuttunee collected his first career WHL point with an assist.

Dowhaniuk then tied the game with just under 3:30 left in the period after depositing a puck top-shelf past a sprawling Rhett Stoesser thanks to a beautiful cross-ice setup from his defence partner Ethan Peters who stepped around a covering winger at the blueline to open the seam.

Less than two minutes into the second period, the Rebels restored their lead after Jhett Larson was able to cash in on a rebound in front of the Edmonton net off a shot from Ollie Josephson.

For a second straight period though, the Oil Kings would have a late period equalizer in them.  With the team’s playing 4-on-4, Rhett Melnyk led the Oil Kings into the Red Deer zone on a 3-on-2 rush and from the left-wing circle ripped a wrist shot over the glove hand of Stoesser to send the teams to the second intermission tied 3-3.  Oil Kings goaltender Kolby Hay picked up an assist on the Melnyk goal for his first career WHL point.

In the third period, the Rebels were able to take their third lead of the game thanks to a late marker from Kai Uchacz with 4:47 left in regulation time.  Carter Anderson added an empty-netter in the final minute to put the game officially out of reach.

Kolby Hay finished the night making 33 saves, while Stoesser turned in a 22-save performance in the Rebels crease for his first career WHL win.  Edmonton went 0-for-4 on the power play, Red Deer was 1-for-3.

Next up, the Oil Kings and welcome the Regina Pats to Rogers Place at 7:00 PM on Thursday, September 29.

The Edmonton Oil Kings next home game is Thursday, September 29 when they welcome Connor Bedard and the Regina Pats to Rogers Place at 7:00 P.M.