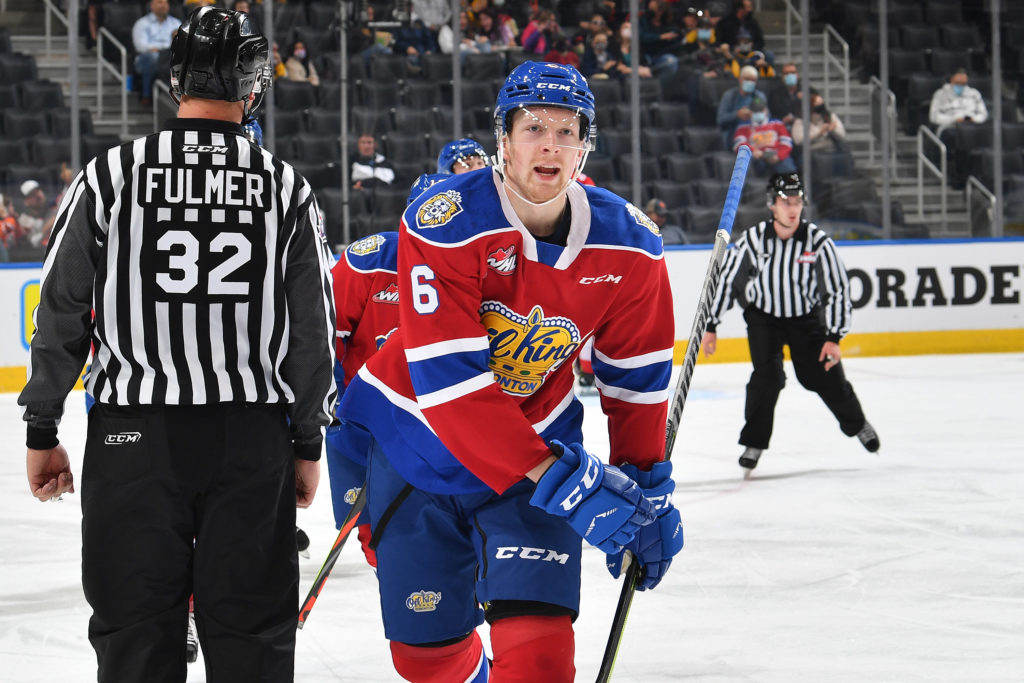 Edmonton, AB – The Edmonton Oil Kings (4-1-0-1) got a pair of goals from Luke Prokop in his debut as they shutout the Lethbridge Hurricanes (3-2-0-0) on Friday night at Rogers Place.

It didn’t take long for Prokop to make an impact in an Oil Kings uniform as he opened the scoring less than five minutes into the opening frame.  Prokop took a pass along the right-wing boards, skated towards the corner, and muscled a shot through the body of Hurricanes goaltender Bryan Thomson from the right hash-marks to give Edmonton a quick 1-0 lead just 4:14 into the game.

The 1-0 advantage for Edmonton held up into the first intermission but could have been expanded in the second half of the period after Ethan Peters had a point-shot re-direct off the crossbar behind Thomson – then the rebound was thrown to the backdoor where Thomson slid across to deny Jacob Boucher with the left pad.

In the second period, both teams had their chances to shift the scoreboard but when the horn sounded to end 40-minutes of hockey, the score still read 1-0 Oil Kings.

In the opening minutes of the middle stanza, the Oil Kings had a pair of clear-cut breakaways denied by Thomson as he used his right pad to stone Tyler Horstmann and then his blocker to take one away from Shea Van Olm.

Later in the period, Carson Latimer was stymied by Thomson on a wrap-around try as the lanky Hurricane netminder stretched across his crease with his goal paddle to snap the puck off the goal line.

The Oil Kings finally broke out offensively in the third period getting an insurance marker on a power play from Josh Williams 11:06 into the period on a great setup by Jakub Demek.

With the ‘Canes on the power play in the late stages, they pulled their goalie for a 6-on-4 advantage, but right off the faceoff in the Oil Kings zone, Horstmann shoved the puck to center ice and Dylan Guenther raced onto it, firing it into the open net from, the red line, to increase the Edmonton lead to three.

Before the night was out, Prokop capped his homecoming with his second of the night, this time pulling the puck off the right-wing boards, walking it to the top of the right-circle and with pin-point accuracy, lasering a shot past the glove-hand of Thomson.

Sebastian Cossa, making his sixth consecutive start, made 25 saves for his first shutout of the season, while Thomson turned aside 36 for Lethbridge.  The Oil Kings went 1-for-5 on the power play, while the penalty kill was a perfect five-for-five.

The Oil Kings are back in action Sunday afternoon when they welcome the Red Deer Rebels to town at 4:00 P.M. for the first Family Fun Sunday of the season.

The Oil Kings next home game is Sunday, October 17 when they welcome the Red Deer Rebels to Rogers Place at 4:00 P.M.