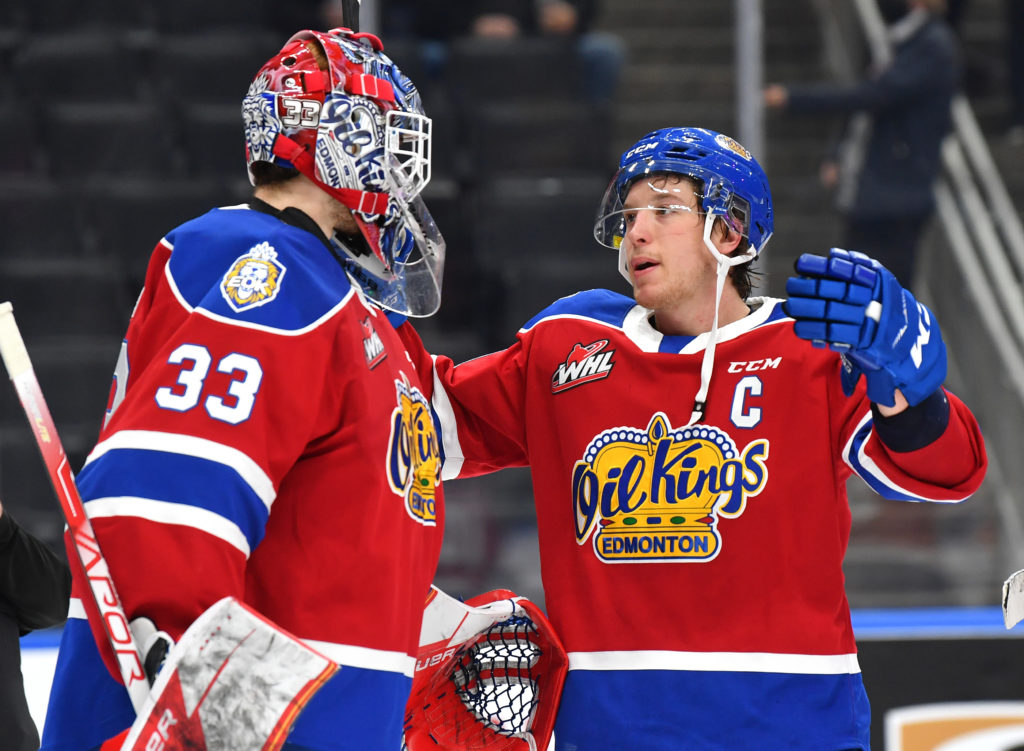 Edmonton, AB – The Edmonton Oil Kings (13-3-2-1) picked up their fourth straight win on Friday night with a 6-3 victory over the Prince Albert Raiders (6-10-0-1) at Rogers Place as they kicked off a three-game homestand.

The Raiders showed no signs of bus legs in the opening period as they jumped on the Oil Kings early, pelting pucks at Edmonton goaltender Sebastian Cossa from all over the offensive zone, but the big Detroit Red Wings prospect would keep the Prince Albert attack at bay.

With just over a minute left to go in the opening period, and the Oil Kings on a power play, Simon Kubicek opened the scoring with a blast from the blueline that tipped in off a Raiders defenceman to send the home side to the intermission up a goal.

The Oil Kings were able to carry the momentum over from the late first period goal as Carter Souch pounced on a rebound, generated by a Jalen Luypen shot, to extend the Edmonton lead to two just 90 seconds into the middle stanza.

The Raiders were able to get one goal back with a power play tally of their own at the 7:29 mark with Hayden Pakkala cashing in a loose puck from the top of the Oil Kings crease.

The Oil Kings, undeterred by the Prince Albert goal, restored their three goal advantage just 1:16 later after John Szabo created a turnover in the left-wing circle of the Raiders zone and feathered a pass into the slot that Kobe Verbicky one-timed into the back of the net.

Before the period was out, Oil Kings newly named captain Jake Neighbours would etch his name in the goal column for the first time this season as he finished off a beautiful tic-tac-toe passing play between himself, Guenther and Josh Williams, sending his team to the intermission ahead 5-1.

In the third period, the Raiders would claw their way back in the game getting goals from Landon Kosior and Reece Vitelli just over three minutes apart in the opening 7:11, but had their hopes of a comeback dashed late in the game after Jacob Boucher pinballed in his fourth goal in his last three games with just over three minutes left in regulation.

Cossa finished the night making a career-high 44 saves, while Seryhenko stopped 17 of the 22 shots he faced in 40 minutes of work and Tikhon Chaika stopped nine of 10 pucks he faced in relief in the third period for Prince Albert.  The Oil Kings went 2-for-3 on the power play, while the Raiders were 1-for-6.

Next up, the Oil Kings host the Calgary Hitmen on Sunday, November 21 at 4:00 PM for another Family Fun Sunday matinee.

The Oil Kings next home game is Sunday, November 21 when they welcome the Calgary Hitmen to Rogers Place for a Family Fun Sunday matinee at 4:00 P.M.