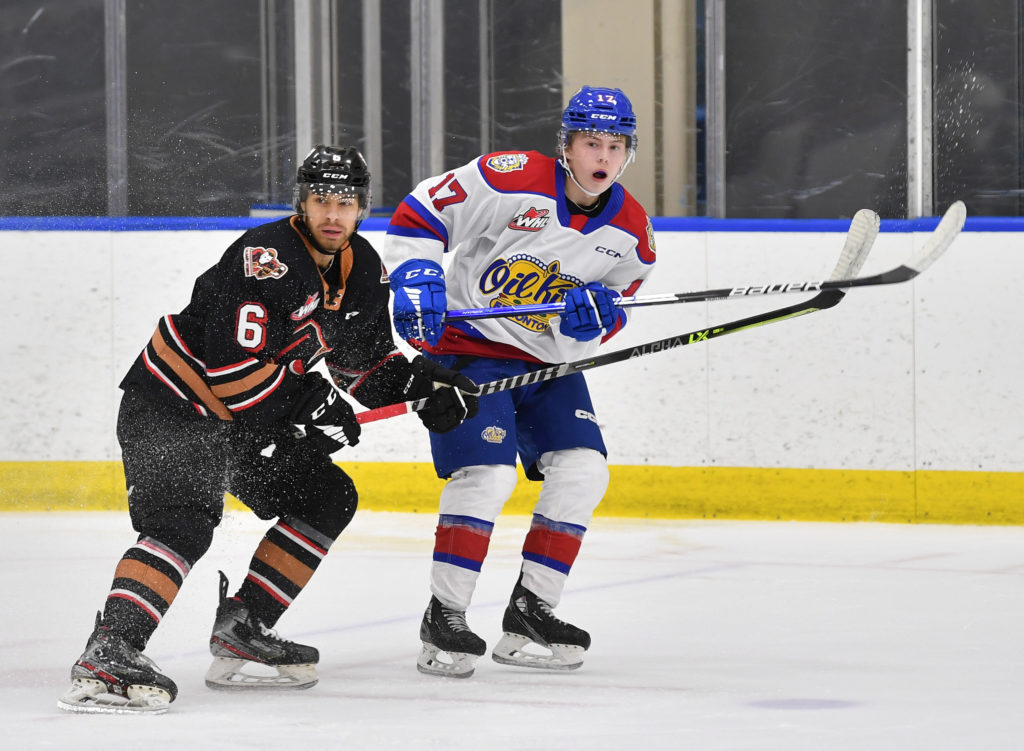 Siksika, AB – The Edmonton Oil Kings came up a goal shy in a comeback bid against the Calgary Hitmen on Saturday night at the Siksika Deerfoot Sportsplex, falling 3-2 in their final pre-season tune up game.

The Hitmen opened the scoring midway through the first period after Carson Wetsch got in on a partial breakaway and snapped a shot just inside the far post from the right-circle.

With just under five minutes left in the first, the Hitmen increased their lead after David Adaszynski ripped a shot short-side from the right-circle on a Calgary 5-on-3 power play.

Just before the period was out, the Hitmen made it 3-0 after Steel Quiring was able deflect home a point-shot on another Calgary man-advantage.

In the second period, Ben Wright got the Oil Kings on the board at the 12-minute mark after he was able to smack in a rebound off a Hayden Wheddon shot in front of the Hitmen net just as an Edmonton power play expired.

In the final minute of the middle stanza, Gavin Hodnett brought the Oil Kings to within one with a shorthanded marker after stealing the puck from a Hitmen defender at the Edmonton blueline, racing the length of the ice on an uncontested breakaway, finishing it off with a slick move to his backhand and elevating the puck over the glove of Christian Francis.

The Oil Kings pressed for an equalizer in the third period but were unable to beat Francis for a third time and ended up on the wrong side of a 3-2 result.

The Edmonton Oil Kings next home game is their regular season and home opener against the Red Deer Rebels on Friday, September 23.  The Oil Kings will raise their 2021-22 WHL Championship banner to the Rogers Place rafters that night.