MENU
NEXT HOME GAME: FRIDAY, OCTOBER 29 vs Winnipeg ICE at 7PM MT
Please review the HEALTH & SAFETY REQUIREMENTS prior to your next visit to Rogers Place
September 25, 2021 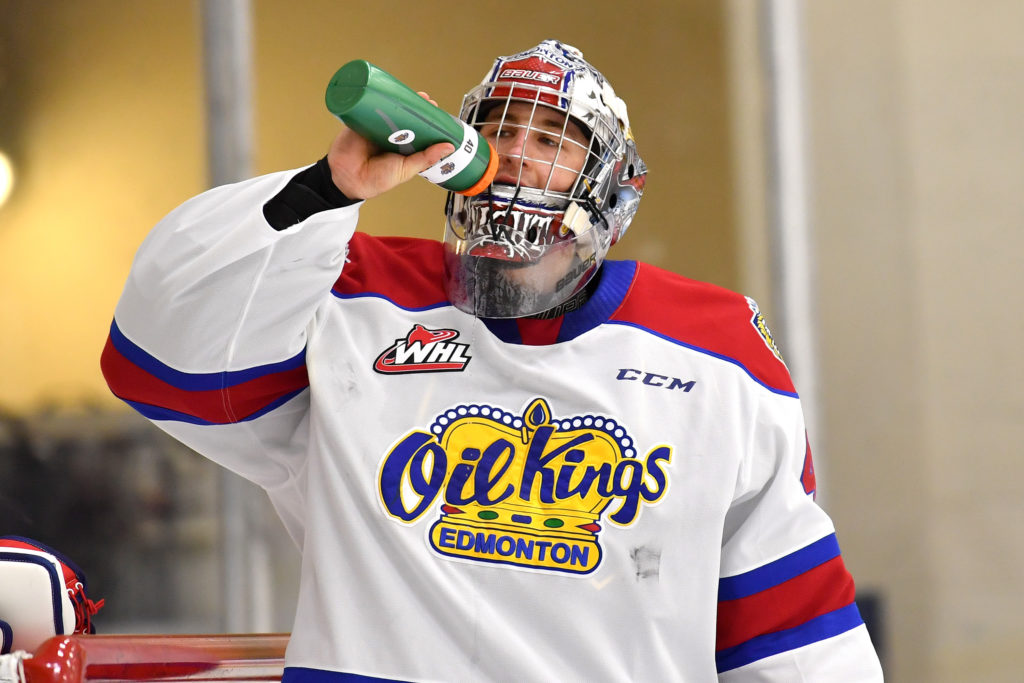 Tsuut’ina Nation, AB – The Edmonton Oil Kings (2-1-2-0) fell by a 2-1 score in overtime on Saturday for a second straight night to the Calgary Hitmen (2-2-0-0), this time at the Seven Chiefs Sportsplex on the Tsuut’ina Nation.

After neither team was able to crack the scoreboard in the opening period of last night’s game, tonight’s game looked to be following suit until a late turnover in the Oil Kings zone led to the Hitmen opening the scoring.  A wide-open Brandon Whynott, in the slot, took a pass from below the goal line following the takeaway, and elevated a wrist-shot past Edmonton goaltender Colby Knight to give the home side the 1-0 lead at the first intermission.

The Oil Kings weren’t without their opportunities in the first period as Calgary netminder Jack McNaughton stopped all 10 shots thrown his way including breakaway stops on Jacob Boucher and Kobe Verbicky.

The second period saw more high-danger chances for the Oil Kings, but they were again unable to solve McNaughton in the Calgary crease.  Tyler Horstmann was turned away in the opening moments on another Edmonton breakaway; Logan Dowhaniuk and Dawson Seitz each took their turns being denied on point-blank opportunities.

In the Oil Kings net, Knight kept it a 1-0 deficit for his team after 40 minutes of play, stopping all eight shots tossed his way in the middle stanza.

For a second consecutive night though, the Hitmen would find the game-winner in bonus hockey with Zac Funk providing the heroics 2:57 into the extra frame after being setup on the back-door on a Calgary odd-man rush.

Knight finished the evening making 40 saves, while McNaughton kicked out 29 of the 30 shots he faced.  Edmonton went 1-for-8 on the power play, while Calgary went 0-for-4.

Next action for the Oil Kings comes Friday, October 1 when they welcome fans back to Rogers Place for the first time in 18 months when they take on the Red Deer Rebels in their 2021-22 Home Opener.

The Oil Kings open their regular season on Friday, October 1 when they welcome the Red Deer Rebels to Rogers Place at 7:00 P.M.