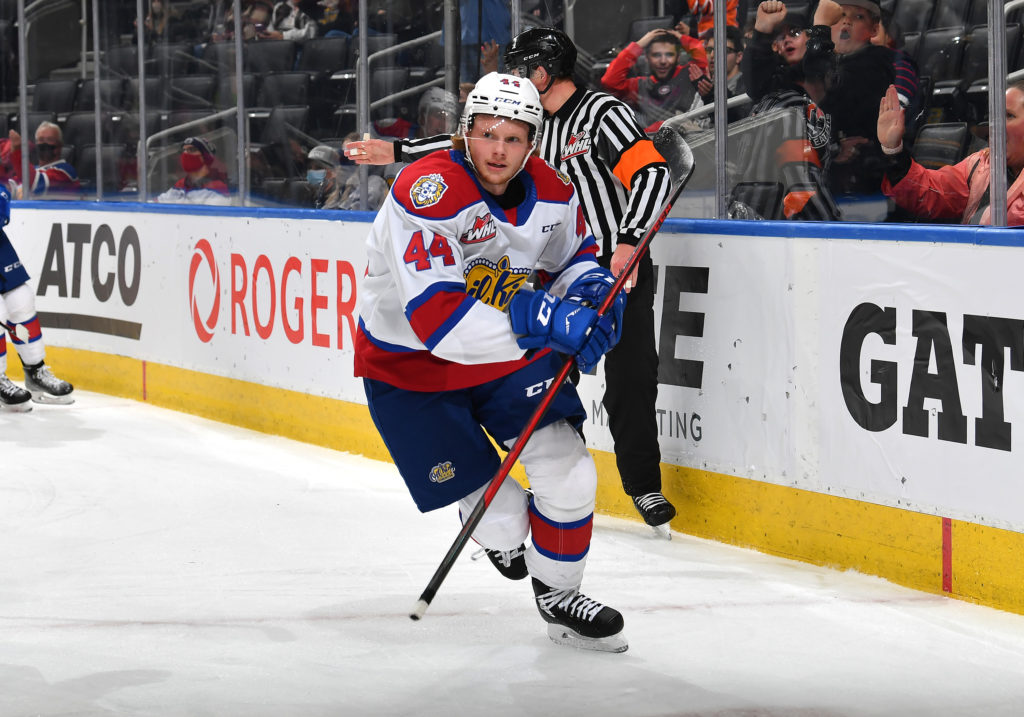 Jalen Luypen kickstarted the goal scoring barrage with a pair of goals just 5:18 into the game.

After taking a bump pass at the Brandon blueline from Carter Souch, Luypen danced his way into the offensive zone, turned Nolan Ritchie inside-out and cut to his backhand to slip the puck past Wheat King netminder Carson Bjarnason for a shorthanded tally.  Luypen added his second of the night 1:40 later after cashing on a rebound off a Jaxsen Wiebe one-timer from the slot.

Souch, playing in his 200th career game, etched his name into the goal column at the 12:57 mark of the first period with a between-the-legs power play marker from the doorstep of the Brandon cage on a setup from Dylan Guenther.

Before the period was out, Guenther got in on the party with a shorthanded goal of his own by intercepting a d-to-d pass at the Edmonton blueline, streaking in down the left-wing side of the ice and ripping a shot top-shelf over the right-shoulder of Bjarnason with 5:03 left in the frame.

The Wheat Kings finally answered back just 3:59 into the middle stanza as Rylen Roersma pounced on a rebound to cut the Brandon deficit to four, but that would be as close as they would get as the Oil Kings poured in four goals of their own in the period.

At 6:58, Wiebe collected his first goal in an Oil Kings uniform by streaking into the Wheat Kings zone and lasering a shot upstairs over the blocker of Bjarnason from the top of the right-circle.

Jacob Boucher than made it a 7-1 lead at 12:51 of the period with his third goal of the season by muscling home a rebound off a Wiebe shot from in-tight.

Souch’s second goal of the game came at 17:53 of the period after Ethan Peters intercepted a neutral zone pass, laid the puck across to Souch on a zone-entry where he cut to the middle and fired it upstairs.

Carson Latimer collected the Oil Kings second power play goal of the game after making a nifty re-direct on a Logan Dowhaniuk point-shot with just five seconds left in the period.

Brandon’s Tyson Zimmer had the lone goal of the third with just 3:38 left in the game after tucking in a rebound on a Wheat Kings power play.

Sebastian Cossa earned his fifth win of the year turning aside 25 of 27 shots.  Carson Bjarnason and Nicholas Jones combined for 28 saves in the losing cause in the Brandon net.  The Oil Kings went 2-for-4 on the power play, while the Wheaties went 1-for-6.

The Oil Kings are back in action tomorrow night when they welcome the Medicine Hat Tigers to Rogers Place for Cartoon Festival at 7:00 P.M.

The Oil Kings next home game is Saturday, October 23 when they welcome the Medicine Hat Tigers to Rogers Place at 7:00 P.M for their second-annual Cartoon Festival.