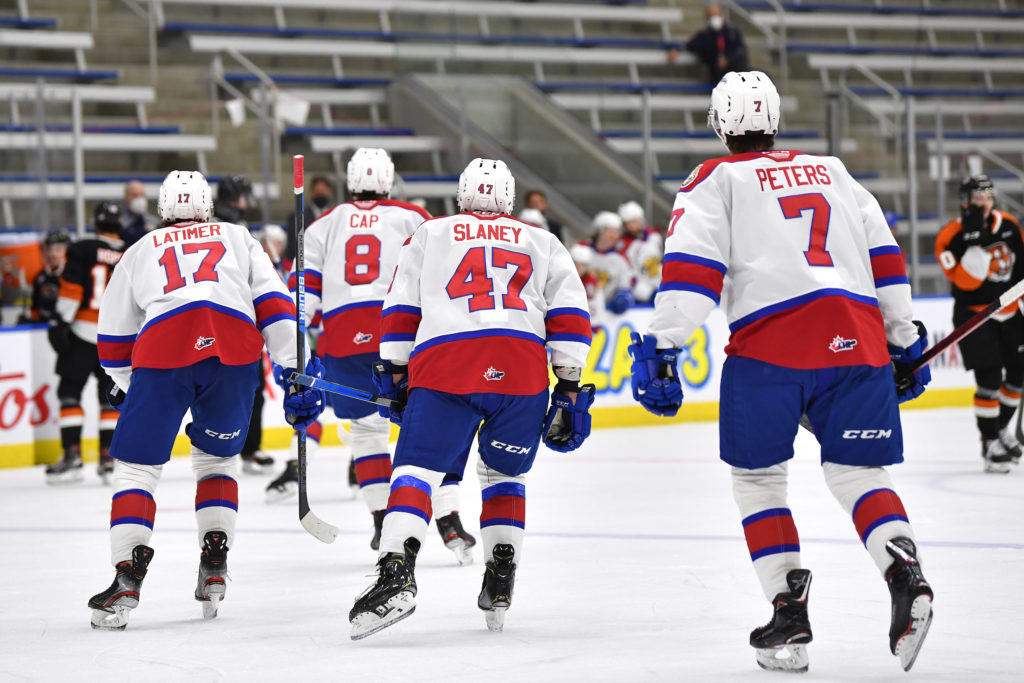 “To do it three years in a row with a good core of these guys, it’s special for us,” said Head Coach Brad Lauer. “It’s been a tough year, it’s been a difficult year, but for the most part our guys have been dialed in and wanted to have a really good season.

“This isn’t an easy thing to do. It’s great that we’re playing games, and to be able to do our thing, but it’s still difficult, there are guidelines they have to follow, it’s different times for them. They’ve done a really good job of making sure they do the right things and stay focused to have a special year.”

Jalen Luypen would prove heroic on this night, recording his third multi-goal game of the year which included the go-ahead goal with under six minutes to play in regulation time.

“The past two game weren’t the way I wanted to play, and I needed to come out with some fire tonight,” said Luypen. “Luckily I was finding the puck well, using my line mates and I thought we all played well tonight, my success tonight certainly came from my teammates and it’s nice to see the puck go in a couple times.”

Josh Williams continued his mastery over his former team, picking up a second period tally, while rookie netminder Colby Knight secured his third win of the season making 17 saves.

“He made some saves for us at the right time,” added Lauer on his young goalie. “He’s only played three games for us this year (heading into tonight), but he’s been focused and working hard each day in practice and for him to get in tonight’s game and respond the way he did was great to see.”

The Oil Kings continued their trend of fast starts against the Tigers this weekend as it took just 4:04 for the home side to open the scoring. Luypen took a pass from Matthew Robertson in the neutral zone, sped down the left-wall before curling in behind the Medicine Hat net and stepping out the right side to stuff home his 13th goal of the season. The Tigers would get their chances to equalize in the first period generating a pair of power-plays, but the Oil Kings penalty killers kept them at bay thanks to some timely saves from Knight.

The second period saw the Oil Kings dominate the shot clock registering 16 shots on Medicine Hat goalie Garin Bjorlund, while limiting the Tigers to just five. Despite that, the Oil Kings remained only up a goal after 40 minutes of play with the teams trading second period markers. Williams briefly extended the Edmonton lead 6:29 into the period as he was able to muscle in a loose puck in front of the Medicine Hat net after having his initial shot blocked on a setup by Jake Neighbours. The goal was Williams 12th of the year. Nick McCarry answered back for the Tigers just 3:05 later getting a fortuitist bounce as Tigers defenceman Daniel Baker had a point-shot stopped by Knight but the rebound caromed off McCarry and in to cut the Edmonton lead in half.

In the third period, the Tigers clawed their way back to a tie game thanks to a slick power-play goal from Lukas Svejkovsky as he took a pass from Brett Kemp, slipped a check in the slot and roofed a wrist shot just 3:54 into the period. With both teams showing signs of fatigue from a grueling, travel packed, three-game-in-four-nights weekend schedule, it looked as though the game was destined for overtime, but with just 5:40 left on the clock, Luypen would score his second of the night and 14th of the season to secure the Central Division championship. Luypen won a faceoff in the right-wing circle to Keagan Slaney who tucked the puck back to Ethan Cap at the blue-line that he quickly fired to the net off Luypen and past Bjorklund.

“It’s a character win,” said Lauer. “We’ve been up and down the highways these last two days, these are tough games to play in and not only that, we’ve got a lot of guys banged up, we’re double shifting guys, they’re playing big minutes, it’s a gutsy win for us.”

The Oil Kings return to action Friday night at 7 PM when they pay visit to the Calgary Hitmen.