MENU
NEXT HOME GAME: FRIDAY, OCTOBER 29 vs Winnipeg ICE at 7PM MT
Please review the HEALTH & SAFETY REQUIREMENTS prior to your next visit to Rogers Place
October 8, 2021 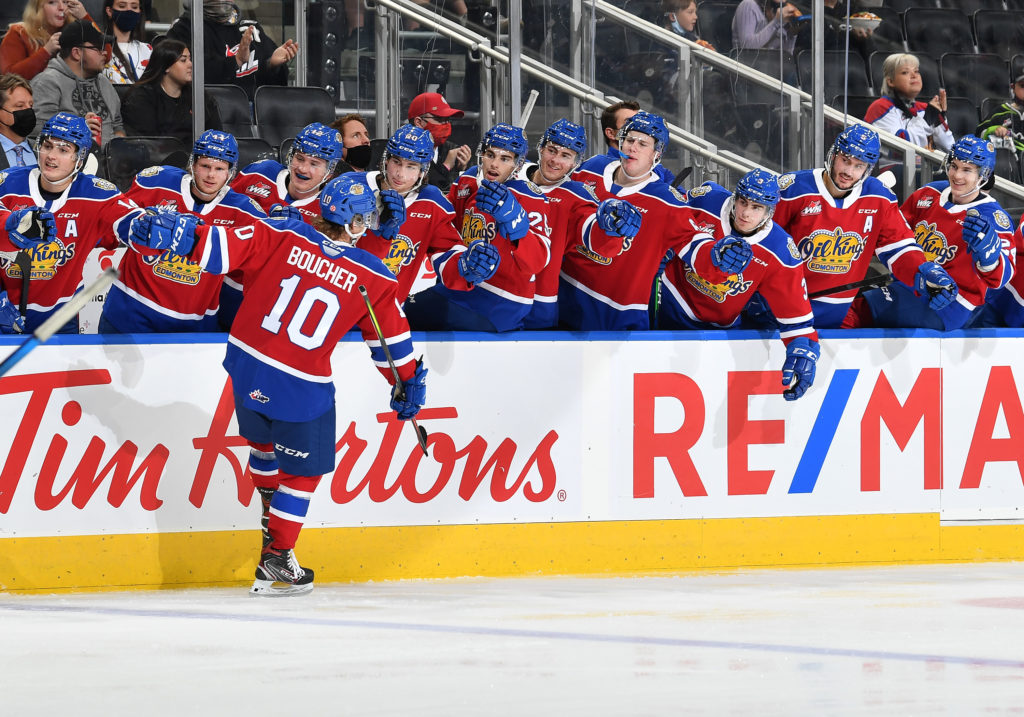 Swift Current, SK – The Edmonton Oil Kings (3-1-0-0) were able to erase an early 1-0 deficit to comeback and defeat the Swift Current Broncos (2-2-0-0) by a 2-1 final on Friday night at the Innovation Credit Union I-Plex.

For a second straight night, the Oil Kings created a scoring chance almost immediately after the opening faceoff with the line of Jalen Luypen, Carter Souch and Carson Latimer bursting into the offensive zone, throwing the puck on net for a big rebound that Luypen just couldn’t navigate past Broncos netminder Isaac Poutler.

Poulter continued to keep the Oil Kings at bay in the first period making partial breakaway saves on both Jacob Boucher and Souch.

The Broncos opened the scoring 7:35 into the game after Josh Davies was able to convert from between the hashmarks after a nice setup from defeceman Sam McGinley.  The goal would be the only offence to speak of in the frame.

In the middle stanza, the Oil Kings came out firing, putting 18 shots on Poulter and at the 10:50 mark would finally breakthrough.  Josh Williams snapped a pass from the bottom of the right-circle to a pinching Eric Johnston in the left-wing circle who one-timed a pass to Boucher at the top of the Swift Current crease that he re-directed home to send the two teams to the second intermission tied 1-1.

The Oil Kings started the third period shorthanded but were able to neutralize the Broncos power play and just as it expired, were granted a power play of their own after Swift Current defenceman Chase Lacombe was handed a five-minute major and game misconduct for a check-to-the-head on Tyler Horstmann.  On the lengthy power play, the Oil Kings made the Broncos pay as Simon Kubicek lasered home a shot from the high-slot for his first goal in an Edmonton uniform at the 2:36 mark.

The Oil Kings hemmed the Broncos in their own zone for much of the remaining third period limiting their chances until the final minute when Rylan Thiessen got in behind the Oil Kings defence but was denied in tight by the left pad of Sebastian Cossa, preserving the Edmonton 2-1 victory.

The Oil Kings are back in action on tomorrow night when they pay a visit to the Medicine Hat Tigers at 7:00 P.M., you can listen to the game live at oilkings.ca/radio.