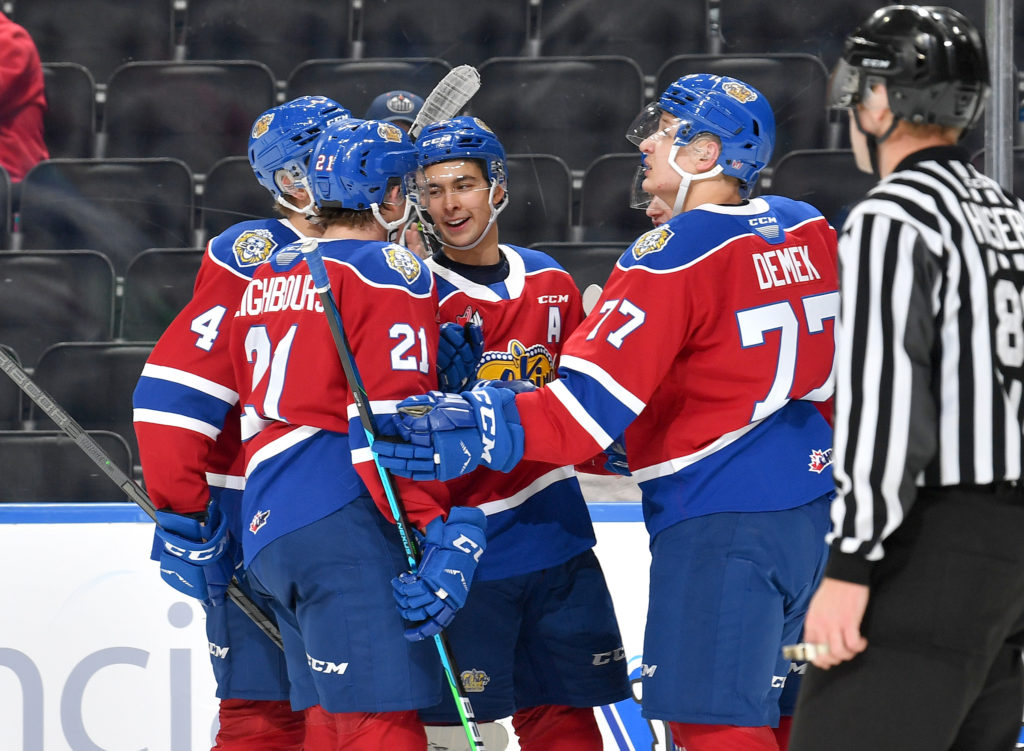 Edmonton, AB – The Edmonton Oil Kings (17-4-2-1) got a third period hat-trick from Dylan Guenther on Friday night, while rookie John Szabo chipped in a pair of goals of his own as they hammered the Medicine Hat Tigers (4-13-3-1) 8-2 at Rogers Place.

The Oil Kings and Tigers skated in a fast paced first period that featured a handful of scoring chances with Oil Kings goaltender Kolby Hay and Tigers netminder Beckett Langkow coming up with some big saves.

Szabo broke the scoreless tie at 12:41 of the first period just as an Edmonton power play expired,  Brendan Kuny retrieved a loose puck at the side of the Medicine Hat net and spotted a wide-open Szabo in front, who snapped a quick shot past the outstretched blocker arm of Langkow, giving the Oil Kings a 1-0 lead after 20 minutes.

The Oil Kings and Tigers would exchange goals in the opening eight minutes of the second period.  First, Kuny notched his first goal of the season, briefly giving the Oil Kings a 2-0 lead at 3:54 of the middle stanza, after Jacob Boucher was able to spy him in front of the Tigers net after both players fended off an immense amount of back-pressure.  Brayden Boehm would bring the Tigers back to within a goal 3:59 later with an unassisted short-handed marker.

In the third period, the Oil Kings tacked on four more goals, with two coming on the power play.  Just 4:39 into the period, Guenther added his first of three goals in the period after one-timing home a Jake Neighbours pass from the left circle on a man-advantage.  Guenther struck again less than three minutes later finishing off a backdoor feed from Carter Souch.  The assist was the 100th of Souch’s career.

At 11:42 of the period, Szabo recorded his second goal of the game as he redirected in a Logan Dowhaniuk point shot on a power play.  Guenther then finished the goal scoring onslaught by registering his second-career hat-trick, lasering in a wrist shot from the right-wing circle over the shoulder of Langkow, the goal was his 16th of the year.

Edmonton product Daniel Baker sandwiched in a power play goal for the Tigers during the four goal Edmonton outburst in the period, but that would be the last of the Medicine Hat offence.

Hay turned aside 32 shots for his fourth win of the season for the Oil Kings, while Langkow took the loss making 37 saves.  The Oil Kings went two-for-six on the power play; the Tigers were one-for-four.

Next up, the Oil Kings welcome are set to host their 14th annual The Brick Teddy Bear Toss game when they take on the Moose Jaw Warriors at 7:00 P.M.

The Oil Kings next home game is The Brick Teddy Bear Toss, presented by Global Edmonton on Saturday, December 4 when they take on the Moose Jaw Warriors at 7:00 P.M.