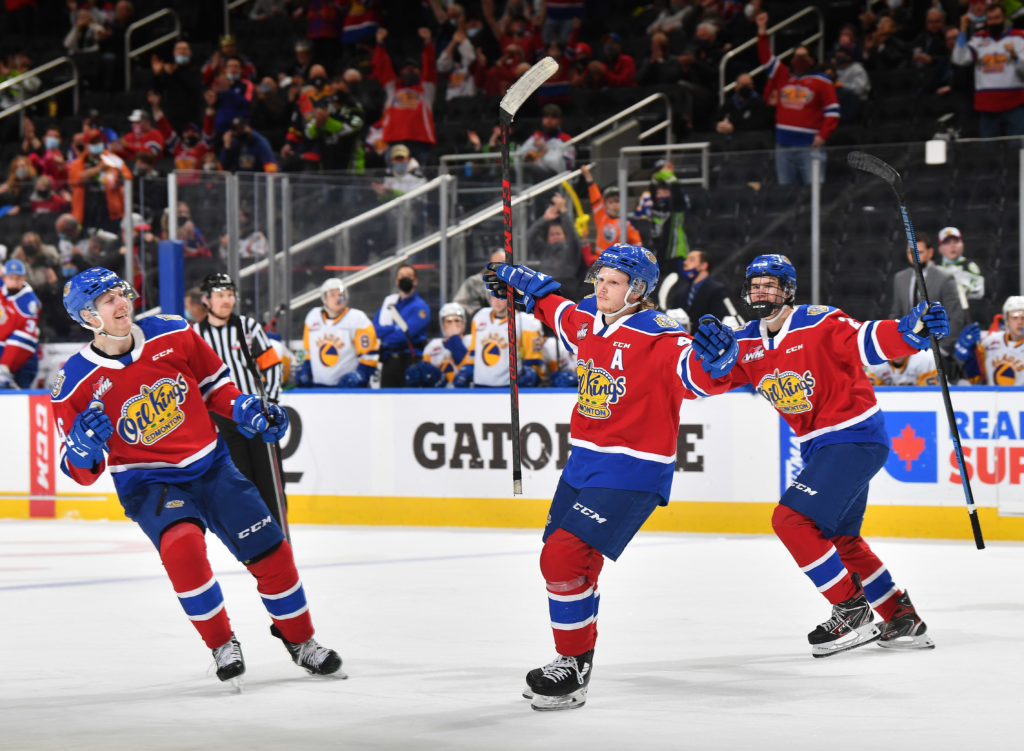 The first period saw the Oil Kings conduct a parade to the penalty box, taking a total of six minor penalties in the opening 20.

In the fleeting moments of five-on-five hockey, the Oil Kings largely carried the play, firing 11 shots the way of Blades keeper Nolan Maier, who was able to keep the Oil Kings attack at bay.

With the six power plays in the first period, the Blades were able to take advantage on two of them.

At 8:37 of the first period, Kyle Crnkovic took a pass from Trevor Wong, walked down the middle of the ice and roofed a shot over the shoulder of Sebastian Cossa to give the Blades a 1-0 lead.

Crnkovic returned the favor for Wong at the 16:10 mark as he showed great patience holding onto the puck as he walked, uncontested, to the Oil Kings goal line, feathered a pass to the top of the Oil Kings crease where a waiting Wong deflected the puck into the Edmonton cage to give the visitors a 2-0 lead at the first intermission

In the second period, it would be the Oil Kings getting their opportunity with the power play after the Blades took three consecutive infractions and on their third opportunity of the frame, Dylan Guenther brought them within a goal.

Jake Neighbours dug out a loose puck in the corner of the Blades zone, tossed it back to Logan Dowhaniuk at the blueline who spotted a wide-open Guenther in the left-circle where he one-timed home his team leading 13th of the year at the 12:12 mark.

While the Oil Kings would score just the one goal in the period, they fired 16 shots the way of the Saskatoon net and had taken complete control of the game at the arrival of the second intermission.

Early in the third period, Jakub Demek would level the score after capitalizing on a nifty centering pass from Jalen Luypen just 4:38 into the frame.

The Oil Kings took the lead shortly after as Carter Souch tucked home his sixth goal of the year at the 7:07 mark of the period after dancing around a Blades defender and navigating a backhander past Maier.

At the 11:34 of the third period, Neighbours connected on his first of two in the period to finish the scoring.  He made it a 4-2 lead after being sprung on a breakaway by Guenther and tucking a backhand deke between the legs of Maier.  The Oil Kings captain then finished the scoring just over three minutes later as he was able to deke out Maier at the side of the Saskatoon net, and curl the puck into the net from just below the goal line to make it a 5-2 finish.

Cossa finished the night with 19 saves, while the far busier Maier turned away 36 of the 41 shots he faced.  The Oil Kings went 1-for-4 on the power play, while the Bladers were 2-for-6.

Next up, the Oil Kings welcome the Medicine Hat Tigers to Rogers Place on Friday, December 3 at 7:00 P.M.

The Oil Kings next home game is Friday, December 3 when they take on the Medicine Hat Tigers at 7:00 P.M.