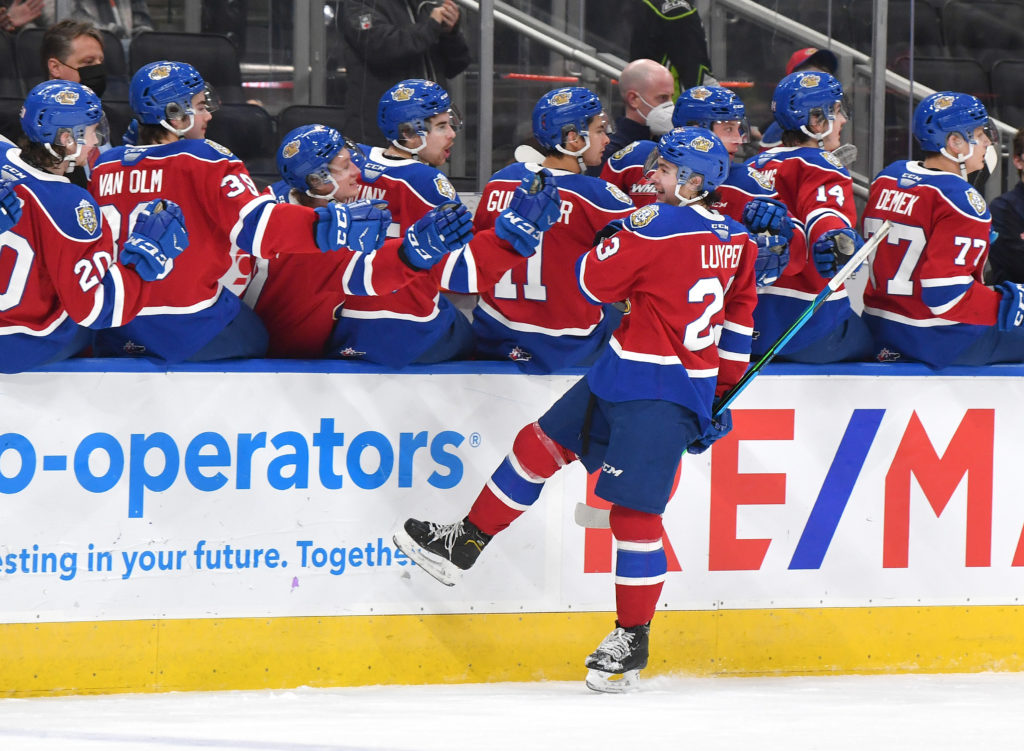 Edmonton, AB – The Edmonton Oil Kings (15-3-2-1) special teams were special on Wednesday night as they extended their win streak to six games with a 5-3 win over the visiting Red Deer Rebels (14-7-1-0).

The Oil Kings and Rebels played a tight-checking opening 20 minutes at even-strength, but it would be the Rebels who found themselves on a couple of power plays and late in the period were able to break the scoreless deadlock.  Red Deer’s leading scorer Ben King positioned himself on the left half-wall and executed a perfect shot-pass to Kai Uchacz who re-directed home his seventh goal of the season to send the visitors to locker rooms with a one-goal lead.

Early in the second period, the Oil Kings found themselves shorthanded again, but this time it would be Edmonton striking on the Red Deer man-advantage.  Jake Neighbours took the puck from Dylan Guenther, skated in behind the Rebels net, and on his backhand laid the puck on a tee for Carson Golder in the left circle that he hammered past Chase Coward for his second goal of the season to even the score.

The Oil Kings took their first lead of the game at the 6:34 of the middle stanza after Dawson Seitz blitzed his way into the right-wing circle of the Rebels zone, tossed a pass to the backdoor that a hustling Guenther grabbed and fired into the back of the net for his team leading 11th goal of the campaign.

Jalen Luypen increased the lead just 46-seconds later with his eighth goal of the year as he navigated his way through the neutral zone, stepped into the high-slot and zipped a wrist shot over the glove of Coward.

The Rebels were able to pull back to within a goal with just over three minutes left to go in the period after Jace Isley was able to sneak in his first goal of the year, but it was quickly answered by the red-hot Oil Kings power play.  With Jhett Larson in the box for Red Deer, the Oil Kings man-advantage unit snapped the puck around the offensive zone, with every player touching the puck before Jakub Demek spotted a wide-open Josh Williams between the hash marks where he rifled in his 10th goal of the season to send Edmonton to the intermission ahead 4-2.

In the third period, the Rebels were able to increase the tension in the game after getting a goal from Carter Anderson 6:44 into the final 20 minutes as he tipped in a centering pass from Christoffer Sedoff.

The Rebels came to close to equalizing the game with five minutes left in regulation after Sedoff danced his way in, dropped the puck off for Larson at the top of the Edmonton crease, but his shot was denied by Sebastian Cossa.

Luypen put the game to bed with 2:51 left on the clock with his second of the night as he and Simon Kubicek worked a perfect give-and-go into the Rebels zone, leading to Luypen being left all alone in front of the Red Deer net where he would notch the insurance marker.

Cossa finished the night making 30 saves for his 50th career WHL win, while Coward turned aside 24 shots in the losing cause.  The Oil Kings went 1-for-3 on the power play, while the Rebels were 1-for-7.

Next up, the Oil Kings hit the road to take on the Lethbridge Hurricanes on Friday night at 7:00 P.M.

The Oil Kings next home game is Sunday, November 28 when they take on the Saskatoon Blades at 4:00 P.M. for another Family Fun Sunday at Rogers Place.