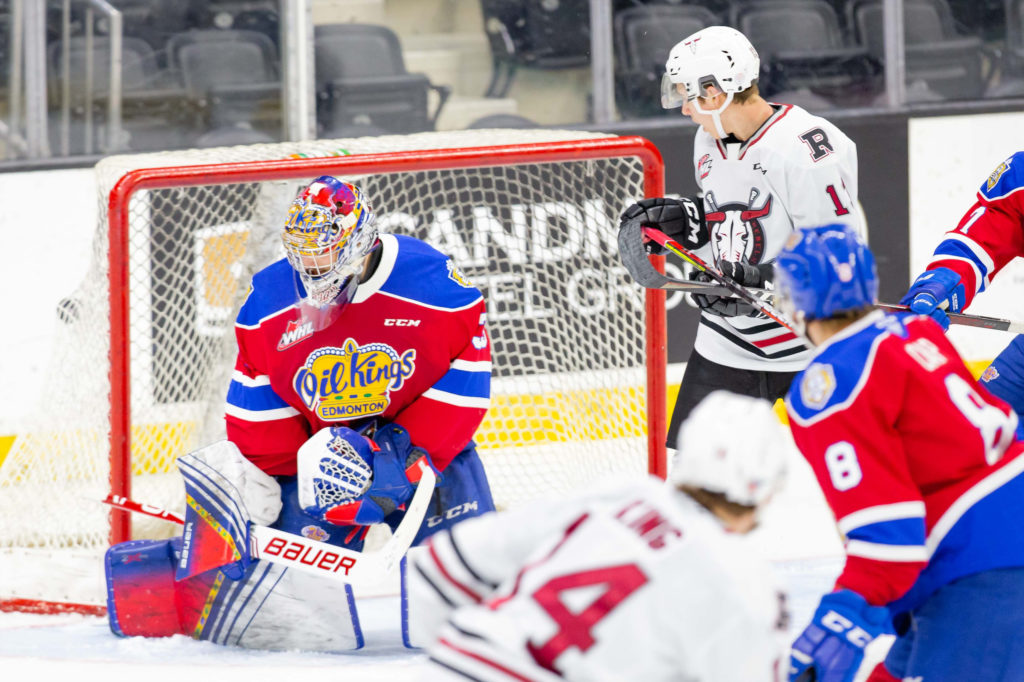 For a second consecutive night the Oil Kings found themselves down a goal less than 60 seconds into the game. Rebels leading scorer Ben King weaved his way through neutral ice to create a three-on-one zone entry for the Rebels, snapped a quick shot off the chest of Sebastian Cossa and cleaned up the rebound himself to stake the home side to the quick lead. King compounded the slow start for the Oil Kings less than four minutes later zipping a short-side shot past Cossa from the left-wing circle on a Red Deer power-play. The Oil Kings started to find their legs just past the midway point of the period and were rewarded with a late goal after Jalen Luypen took a pass from Carter Souch in the left-circle, lasered a shot on net that Chase Coward got his shoulder on but the rebound dropped into the crease and Logan Dowhaniuk arrived to stuff in his third goal of the season to bring the visitors to within a goal heading into the intermission.

In the second period the teams traded specialty team’s goals with Chris Douglas briefly restoring the Rebels lead to two goals with a shorthanded marker 7:56 into the middle frame after grabbing a loose puck in the neutral zone, racing into the right-circle of the Edmonton zone and snapping a shot far-side on Cossa. Red Deer ran into penalty trouble in the period ending up short-handed four times and on the third Edmonton power-play, Dowhaniuk struck for the second time on the night pounding a one-timer from the blueline past a screened Coward setup by Carson Latimer and Ethan Cap.

The Oil Kings spent the first five minutes of the third period on the power-play after the Rebels took two more penalties to start the last stanza but couldn’t make Red Deer pay. The Oil Kings best chance to equalize came off the stick of Luypen with 4:22 left in regulation time after he was setup on a backdoor play that Coward sprawled across to deny with his left pad. Ethan Rowland capped the night for the Rebels depositing an empty-net goal with just three seconds left on the clock.

Edmonton finished the night 1-for-6 on the power-play while the Rebels were 1-for-4. The Oil Kings outshot the Rebels 26-25.

The Oil Kings return to action Tuesday night at home when they welcome the Lethbridge Hurricanes to town at 7 PM.