MENU
NEXT HOME GAME: FRIDAY, OCTOBER 29 vs Winnipeg ICE at 7PM MT
Please review the HEALTH & SAFETY REQUIREMENTS prior to your next visit to Rogers Place
September 18, 2021 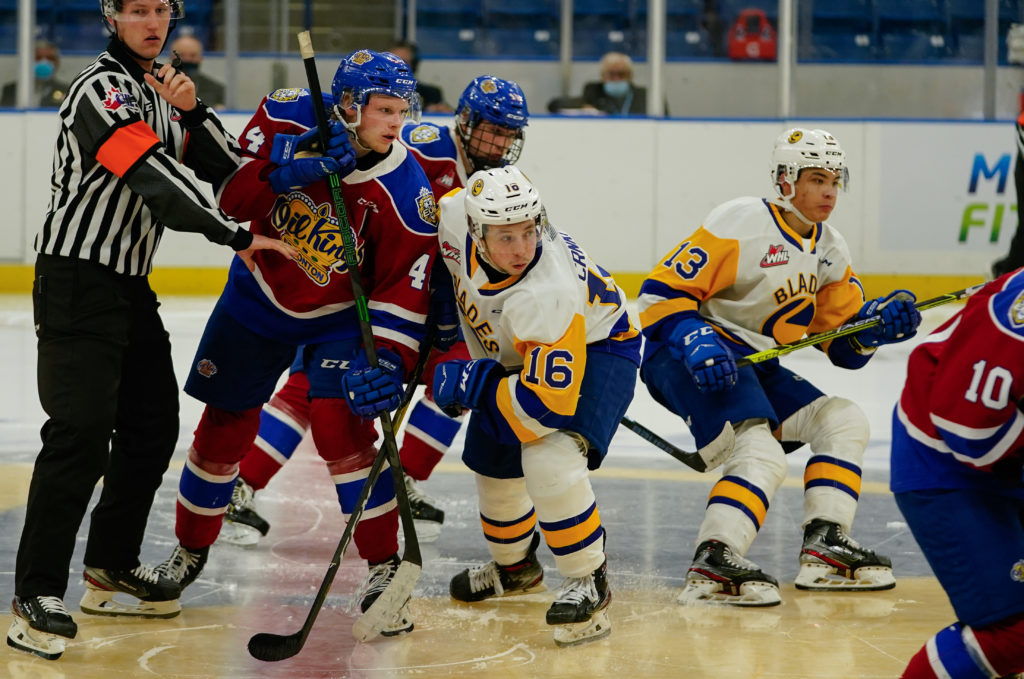 The Oil Kings got off to a fast start with Carter Souch collecting his first of two goals, and three points, in the first period after Jacob Boucher spotted him on the backdoor with a beautiful cross-seam pass from the left-wing boards just 46 seconds into the contest.  Souch added to his team’s lead just under three minutes later as he re-directed a Blake Heward point-shot past Blades starting goaltender Ethan Chadwick.  Saskatoon ran into penalty trouble late in the frame, and with a pair of Blades in the box, Logan Dowhaniuk blasted home a one-timer from the right-circle with 5:34 left to play in the period to send the Oil Kings to the intermission ahead 3-0.  Souch and Boucher combined for two goals and four assists in the first period.

The second period saw more magic from Souch and Boucher as they combined to make it 4-0 just 4:01 into the middle stanza, while shorthanded, after Souch outmuscled a Blades defender for the puck and setup Boucher at the top of the Saskatoon crease.  Ross Stanley added to the Edmonton lead just past the midway mark of the period, flinging home a point-shot off a clean faceoff win by Tyler Horstmann.  With under three minutes to play in the period, the Oil Kings tacked on a pair of power play markers; first Brendan Kuny lasered a one-timer home from the left-circle with the teams at 4-on-3, and just over a minute later, Dowhaniuk guided in his second of the night from the high-slot with 1:20 left on the clock.  Oil Kings starting goaltender Kolby Hay was far busier in the second period than the first, after stopping all four shots in the opening frame, he added 13 more stops to his total in the second.

Nolan Maier replaced Chadwick in the Blades net to start the third period and was tested right away, robbing Carter Souch of his hat-trick by making a pad save on a breakaway.  The Blades would find some offence throughout the third period getting goals from Carter Streek, Brendan Lee and Charlie Wright, but that would be as close as they would come as the Oil Kings skated away with a 7-3 win to earn the weekend split.

Hay went the distance in the Edmonton crease stopping 31 of the 34 shots he faced.  Chadwick and Maier combined for 18 saves on 25 Oil Kings shots.  The Oil Kings finished the night 3-for-5 on the power play, while the Blades went 1-for-5.

The Oil Kings are back in pre-season action Friday when they welcome the Calgary Hitmen to the Downtown Community Arena at 7:00 PM.