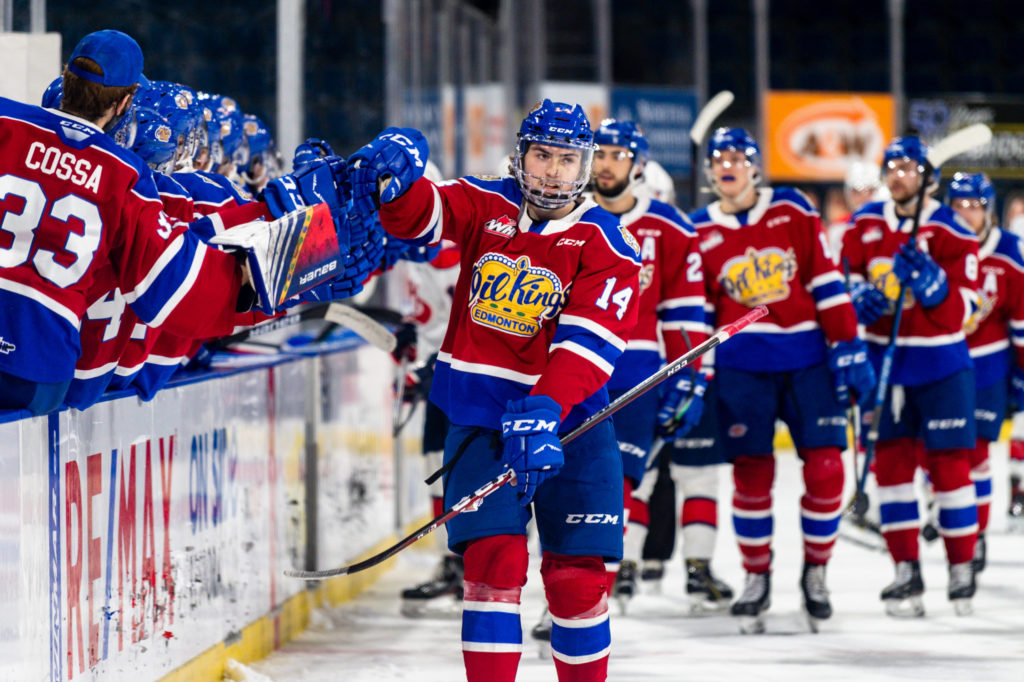 After getting off to a slow start on home ice the night previous and finding themselves down two goals after one period of play to the Hurricanes, the Oil Kings turned the tables on their opponents. Carter Souch opened the scoring with his third goal of the season after Jalen Luypen skated onto a loose puck behind the Lethbridge net, muscled a rolling puck into the high-slot that Souch leaned into and blasted over the right shoulder of Carl Tetachuk 9:23 into the game. Josh Williams extended the Oil Kings lead with just 2:36 left on the clock in the opening frame scoring his ninth goal of the campaign. Caleb Reimer forced a turnover just inside the Lethbridge blueline, allowing Jake Neighbours to grab a loose puck that he would send to a wide-open Williams in the left-wing circle where he would elevate a wrist shot into the short-side top-shelf. Despite the two goals by the Oil Kings, it was a fairly tight-checking first period that saw the teams combine for just 15 shots on goal, nine for Edmonton and six for Lethbridge.

The second period was anything but tight-checking with the teams combining for five goals in the middle stanza. Hurricanes captain Dino Kambeitz got his team on the board just 40 seconds into the period after taking advantage of a turned-over puck in the right-wing circle and stuffing it past Colby Knight. The Oil Kings answered back quickly just 1:04 later with Caleb Reimer intercepting an errant Lethbridge clearing attempt and walking in alone on Tetachuk, snapping a low wrist shot over the left pad of the Hurricanes goaltender for his second goal in as many games. Shortly after restoring their two-goal lead, the Oil Kings would expand upon it with Souch collecting his second goal of the night finishing off a beautiful tic-tac-toe passing play from the right-wing circle on a one-timer that found the top-shelf, setup by Luypen and Carson Latimer.

Midway through the second period, the Hurricanes chewed into the Oil Kings lead again with Logan Barlage racing into the right-wing circle of the Edmonton zone and snapping a low shot, short-side on Knight. Before the period was out, Latimer would tack on his fifth goal of the season and third point of the night as he cleaned up a rebound in front of the Lethbridge net following a Kaid Oliver wrist shot at the 17:24 mark to restore the Oil Kings three-goal lead heading to the third period.

After surrendering five goals on 25 shots through 40 minutes of play, the Hurricanes lifted Tetachuk for rookie Jared Picklyk who would give the Hurricanes a chance in the third period. Picklyk stopped all seven shots he faced in relief, all of which were high-danger scoring chances from the Oil Kings. The Hurricanes though would be unable to use the momentum provided from their young goaltender in the last stanza, generating just three shots on goal. Noah Boyko did find the back of the net for his fourth goal in his last two games 5:21 into the period to bring Lethbridge to within two, but that was as close as they would come.