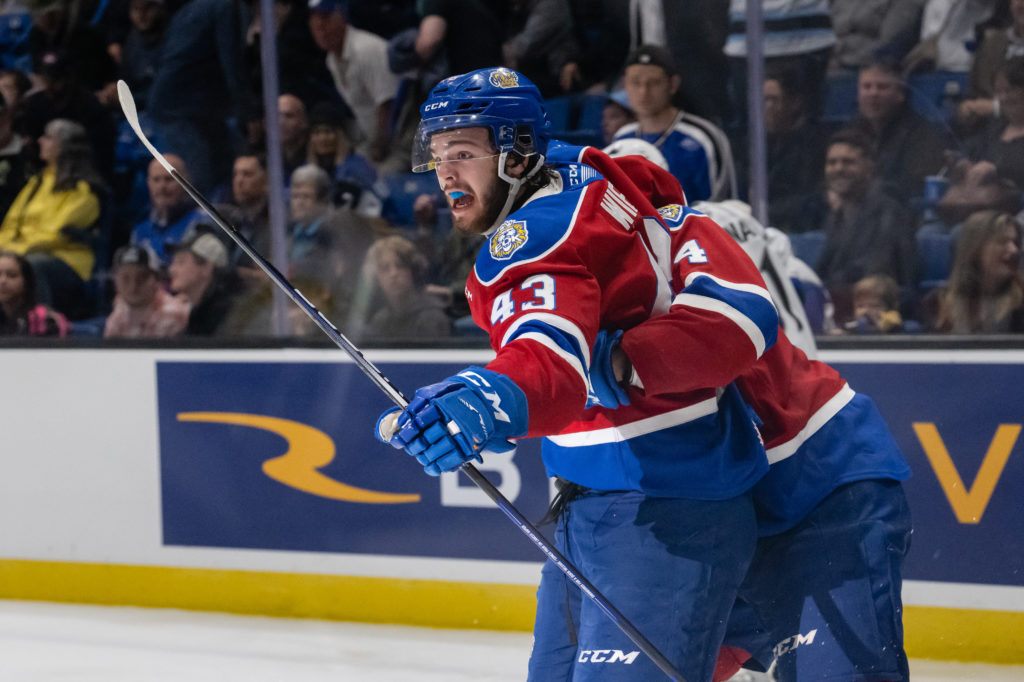 Saint John, NB – Jaxsen Wiebe completed a hat-trick with an overtime winning goal on Wednesday night to give the Edmonton Oil Kings a 4-3 win over the host Saint John Sea Dogs at the 2022 Memorial Cup.

A busy opening 10 minutes saw a total of five goals and the Sea Dogs holding a 3-2 lead as the two clubs arrived at the first intermission.

The Oil Kings stormed out to a 2-0 lead less than 4:30 into the game after Wiebe was able to muscle home a rebound, off a Carter Souch shot, in front of the Saint John net on an Edmonton power play which was then followed by Souch cashing in after a perfect setup from Josh Williams on a two-on-one rush.

William Dufour gave the Sea Dogs the lead exactly 10 minutes into the game after he took a pass from Philippe Daoust in the neutral zone, lugged it into the high-slot and ripped a hard shot past the glove of Sebastian Cossa.

The Sea Dogs outshot the Oil Kings 16-9 in the opening 20 minutes.

In the second period, the Oil Kings were granted another early power play and again, Wiebe would find the back of the net.  In the dying seconds of the man-advantage, Souch went coast-to-coast, dancing around three Sea Dogs penalty killers before ringing a shot off the goal post that would bounce right back in front of the net to a waiting Wiebe who gloved down the fluttering puck and shoveled home a backhander, tying the game at three just 2:05 into the middle stanza.

Both teams would have opportunities to take the lead throughout the period, but the Sea Dogs had their best bids from Dufour and Ansons turned away by Cossa, while both Brendan Kuny and Jalen Luypen had partial breaks thwarted by Saint John netminder Nikolas Hurtubise.

In the third period, neither team would be able to breakthrough, sending the game into 3-on-3 overtime.

The overtime would last eight pulse-pounding minutes with chances at each end but the 8:05 mark of the bonus period, Wiebe called game as he streaked into the right-wing circle and rocketed a shot short-side top shelf to give the Oil Kings the victory.

Cossa finished the night making 36 saves in the win, Hurtubise made 27 saves in defeat.  The Oil Kings went 2-for-4 on the power play, the Sea Dogs were 0-for-4.

Next up, the Oil Kings conclude their round-robin schedule at the 2022 Memorial Cup on Friday as they take on the OHL Champion Hamilton Bulldogs at 4:00 PM MT.

All Memorial Cup games are televised on TSN and all Oil Kings games can be heard at oilkings.ca/radio.

The Edmonton Oil Kings are hosting #ChaseTheCrown 50/50 for the 2022 Memorial Cup! This multi-day raffle runs from June 20 at 9:00 A.M. MT until the Championship Final on June 29.