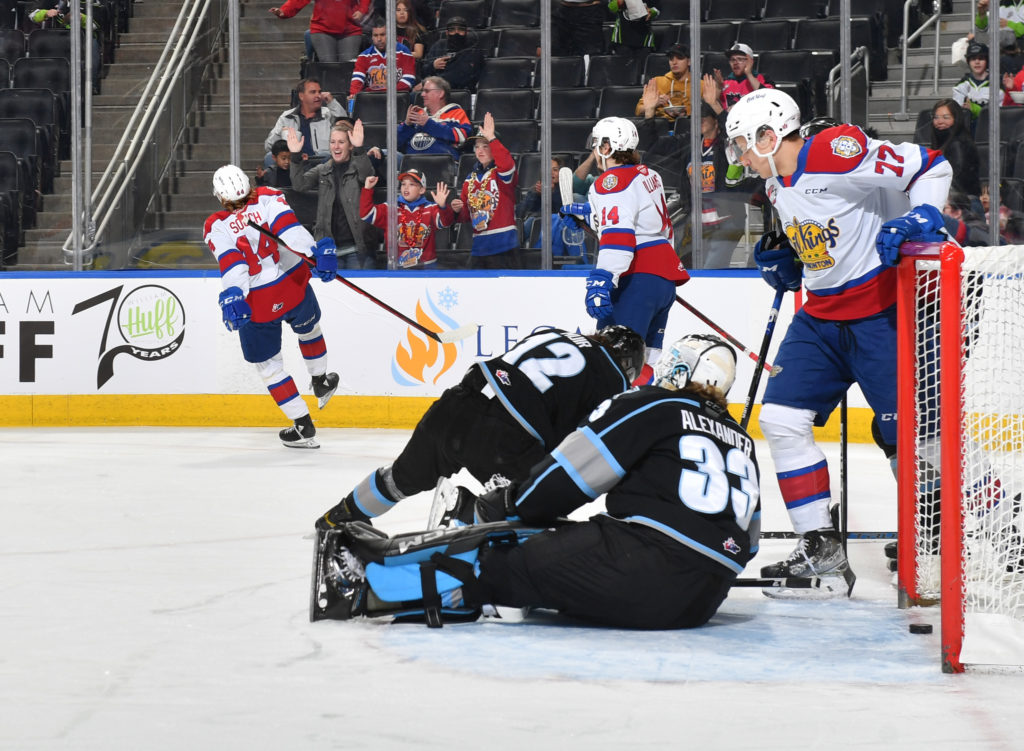 Edmonton, AB – The Edmonton Oil Kings have taken a 3-1 lead in the Eastern Conference Championship Series thanks to a 4-2 win over the Winnipeg ICE at Rogers Place on Wednesday night.

The Oil Kings got two goals from Carter Souch in the opening 10 minutes of the game to help give them a 2-1 lead after 20 minutes.

Souch’s first goal came just over five minutes into the game on a terrific setup from Josh Williams who lugged the puck into the offensive zone, drove wide, and then hooked the puck in front to an on-rushing Souch who fired it past a sprawling Gage Alexander.

Winnipeg answered back just over a minute later on a power play as Owen Pederson tipped in a shot from Connor McClennon in front of the Oil King net.

Williams and Souch connected again a short-time later though to restore the Edmonton lead.  Off a lost faceoff in the offensive zone, Williams was able to track down and strip the puck from an ICE defenceman behind his net and caromed the puck in front for Souch who blasted a one-timer to the back of the net.

In the second period, the ICE had the early momentum creating a handful of chances at the Edmonton net, but Sebastian Cossa had the answer each time making two big saves on McClennon and robbing Jackin Smallwood on a backdoor oppurtunity.

The Oil Kings briefly increased their lead to two after Justin Sourdif intercepted a clearing attempt by Alexander, walked in on the Winnipeg goalie, and roofed a shot over his left arm.

But, before the period was out, the ICE were able to pull back within a goal after Edmonton got caught on a long-change.  McClennon found Pederson in behind the Edmonton defence and the Stony Plain product made no mistake depositing his second of the night by slipping the puck five-hole on the breakaway.

In the third period, the Oil Kings put the game away as for a third time in the game, Williams setup an Edmonton goal.  In the late stages of an Oil Kings power play, Williams got in on a forecheck, stole the puck along the left-wall and found a wide-open Dylan Guenther in the slot for his 13th goal of the playoffs at the 11:24 mark of the third period.

Cossa finished the night making 20 saves in the win, while Alexander made 32 saves in the Winnipeg crease.  Both teams went 1-for-4 on the power play.

Next up, the Oil Kings and ICE are back it for Game 5 of the series at 7:00 PM on Friday night at Rogers Place.

The Oil Kings next home game is Friday, May 27 when they welcome the Winnipeg ICE to Rogers Place at 7:00 PM for Game 5 of their Eastern Conference Championship Series.