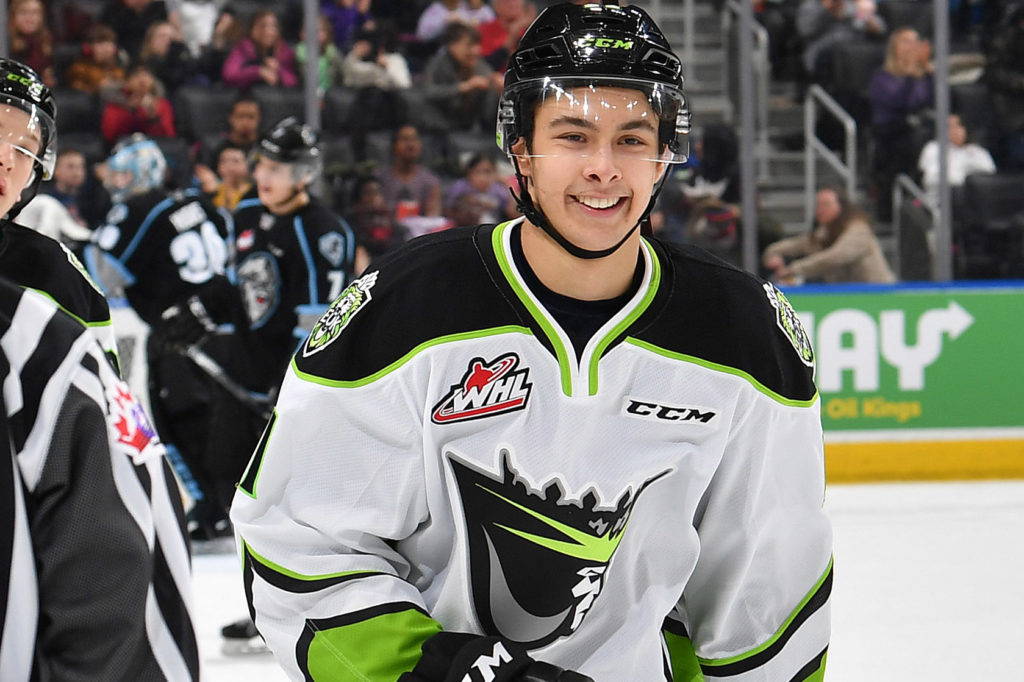 With more than 7,000 students in the house for the 11th annual Hockey Hooky, Rogers Place was possibly the loudest it’s been all season.

And the Edmonton Oil Kings certainly did their part by giving them lots to cheer about.

The three-goal performance gave the 16-year-old Guenther 25 goals on the season, setting a new franchise record for goals by a rookie in the modern era surpassing the previous mark set by Trey Fix-Wolansky (24) in 2016-17.

His four-point night also helped him set a new record for points by a rookie (56), passing the old record by defenceman Martin Gernat (55) in 2011-12.

It’s the second time he’s registered four points in a single game, accomplishing the feat the first time earlier this season in an 8-3 win over the Red Deer Rebels on December 28, 2019. 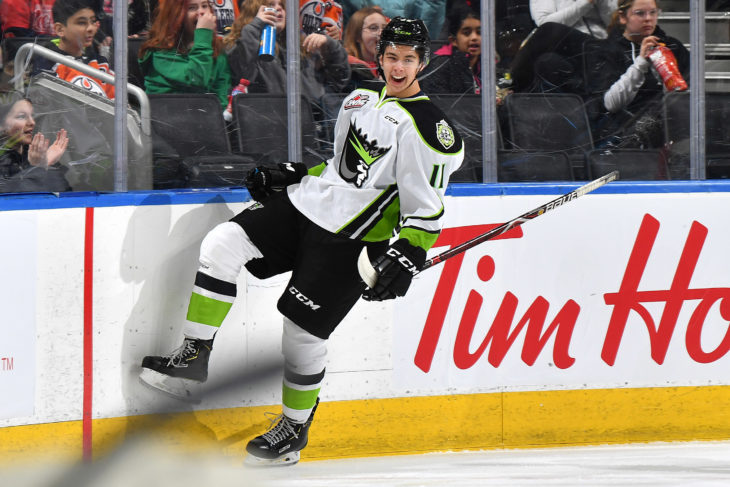 It was the fourth and final meeting between the ICE and the Oil Kings this regular season, and the obvious choice in goal was Sebastian Cossa (21-4-2-1). The 17-year-old from Fort McMurray, AB was kryptonite to Winnipeg skaters all season long, which culminated with a 17-save performance this afternoon and his 21st win.

All totaled, Cossa allowed just two goals on 111 shots by the ICE this season, going 4-0-0-0 with a pair of shutouts. The Oil Kings outscored Winnipeg in the four-game season series, 26-2. 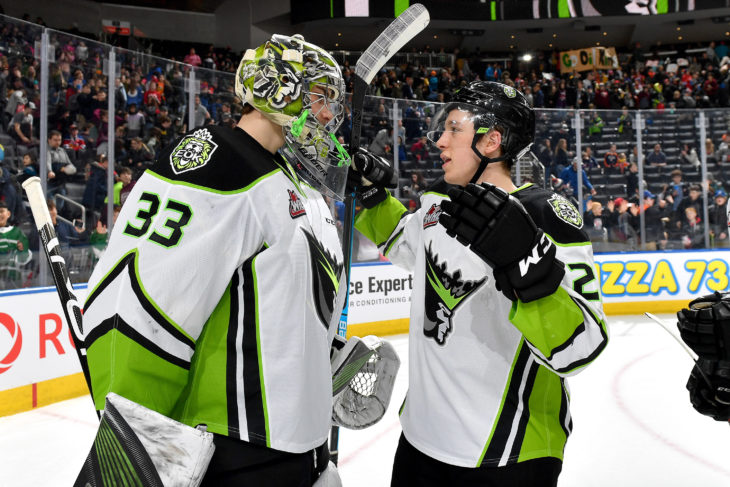 This is the second straight season that Hockey Hooky has seen an explosion of goals for the Oil Kings, as they collected an emphatic 11-1 win over the Swift Current Broncos here during the school day game in 2018-19.

This year, Logan Dowhaniuk and Samuel Stewart each had milestone affairs as Dowhaniuk tallied his first career multi-point game (1G, 2A), and Stewart posted his first goal as an Oil King and his first three-point contest (1G, 2A).

Jake Neighbours (1G, 2A), Josh Williams (1G, 1A), Scott Atkinson, Vladimir Alistrov and Carter Souch were the other goal scorers for the Oil Kings, who need just two wins to match last season’s mark of 42.

On Tuesday, the Oil Kings took a 1-0 lead at 2:55 of the first period when Guenther outlasted the ICE goaltender with a slick flick of the stick for his 23rd of the season, from Riley Sawchuk and Neighbours.

Guenther’s second of the period tied him for the previous mark of most goals by a rookie in a season with 24, even though it was scored in a rather unconventional way. A shot from Neighbours found the body of Guenther before finding the back of the net to make it 2-0 Edmonton on the power play, with the second assist to Matthew Robertson, at 7:07.

The assist to Robertson was the 100th regular season point of his career (181 GP).

Just three minutes later with shots 12-0 in favour of the Oil Kings, the home side took a 3-0 lead on another momentous marker. Neighbours was parked on the doorstep and buried his 22nd of the campaign, with Dowhaniuk earning the primary helper. The secondary assist was gathered by Guenther, which gave him sole possession of the new record for most points in a season by a rookie, surpassing the previous record of 54 set by Gernat. 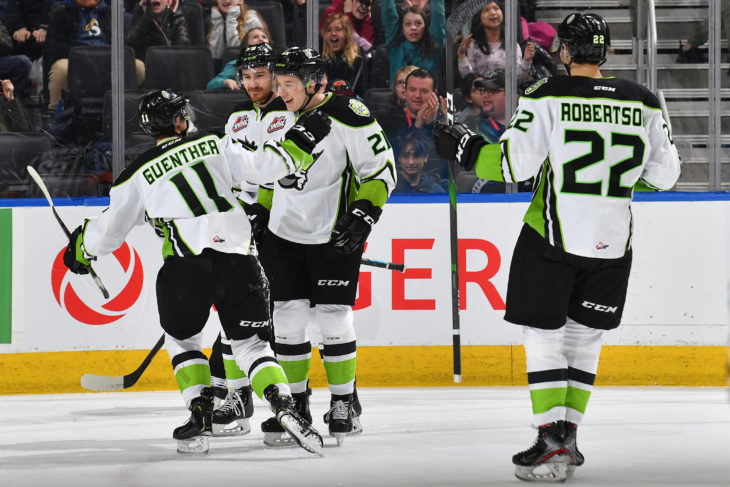 Before the period was out Guenther completed his first WHL hat trick for his fourth point of the game, firing a laser from the side of the net and beating Liam Hughes for his record-breaking 25th goal of the season, from Sawchuk, at 17:38 to round out the flurry of offense in the opening frame.

Shots on goal in the first 20-minutes were heavily sided in Edmonton’s favour, 17-2.

The ICE began the second period by making a goaltending change, replacing Hughes with Gage Alexander.

With their fifth shot of the game Winnipeg got on the board, cutting the Edmonton lead to 4-1 on James Form’s third of the year at 5:10.

The Oil Kings responded just over a minute later, however, to restore their four-goal lead as Dowhaniuk tallied his second of the season to make it 5-1, from Ethan McIndoe and David Kope, at 6:12. 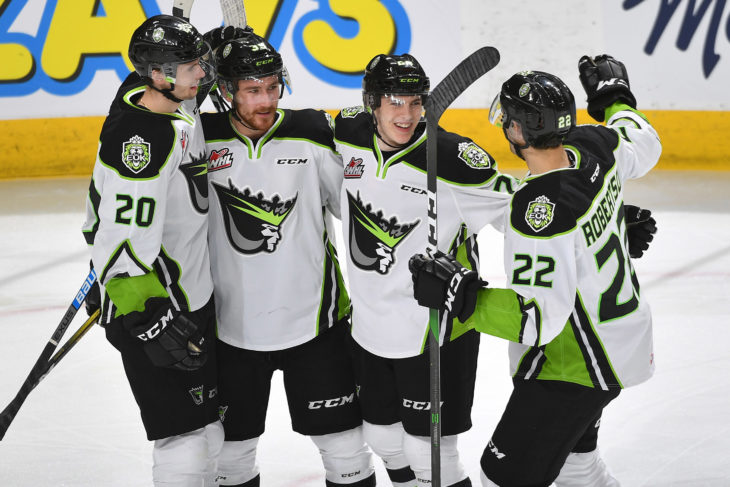 Stewart’s third of the season made it 6-1 with a blast from the right point, assisted by McIndoe and Wyatt McLeod, at 10:46.

The high-octane second period continued when a Dowhaniuk shot from the point was tipped in front by Williams to make it 7-1 Edmonton at 11:46.

As the second period neared a close the ICE pressed to close the gap but Cossa stood tall, including making a miraculous stick save while spinning to regain position in the crease.

In the third, the offence continued when Atkinson notched his 12th of the season, from Stewart and Williams, at 8:58, followed by a great individual effort and finish from Alistrov, fighting off a Winnipeg defender for his 17th of the year, after being sprung by McLeod at 12:04.

Just under two minutes later Souch rounded out the game’s scoring with his 17th, the assists to Stewart and Jalen Luypen at 13:50. 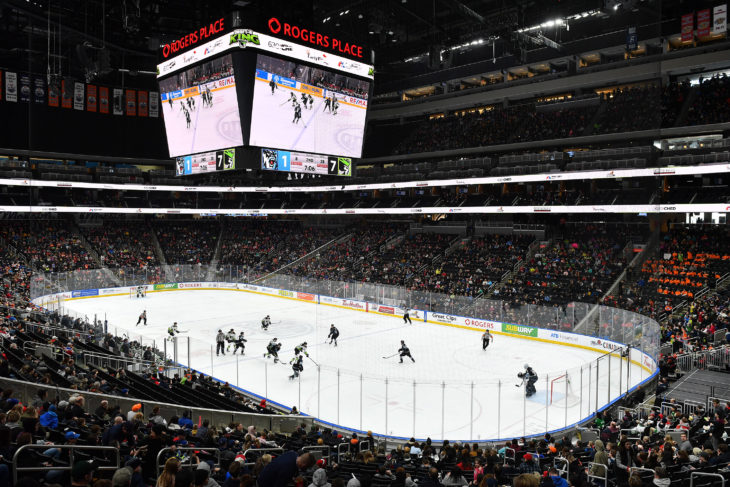 Final shots on goal were 41-18 in favour of the Oil Kings, which included a 12-7 Edmonton edge in the third period.

Hughes (18-9-0-0) started in goal for the ICE and surrendered four goals on 17 shots before being replaced by Alexander at the start of the second period. Alexander allowed six goals on 24 shots over the final 40 minutes of play.

Winnipeg was 0-for-3 on the power play, while Edmonton was 1-for-1 with the man advantage. 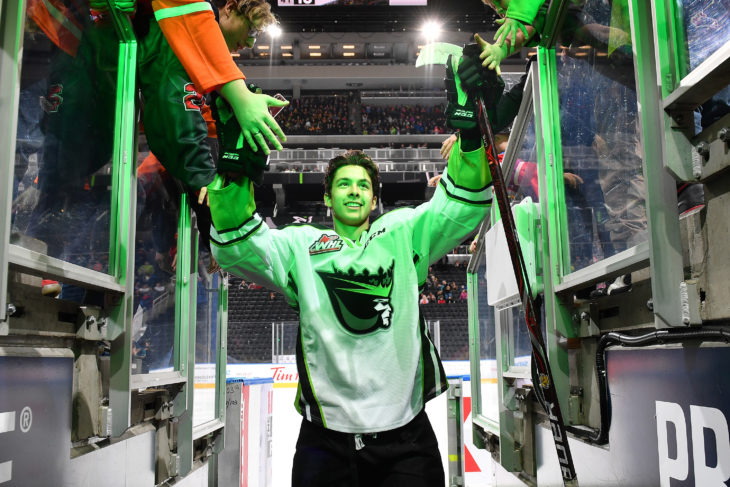 The Oil Kings head back on the road for a pair of games this weekend, starting on Friday, February 28 when they take on the Lethbridge Hurricanes at 7:00 PM MT. They visit the Red Deer Rebels the following night, Saturday, February 29 at 7:00 PM MT.

Their next game at Rogers Place is a mid-week meeting with the Spokane Chiefs on Wednesday, March 4 at 7:00 PM MT.