MENU
THE WESTERN HOCKEY LEAGUE HAS UPDATED ITS RETURN TO PLAY PLAN FOR THE 2020-21 SEASON
December 5, 2018 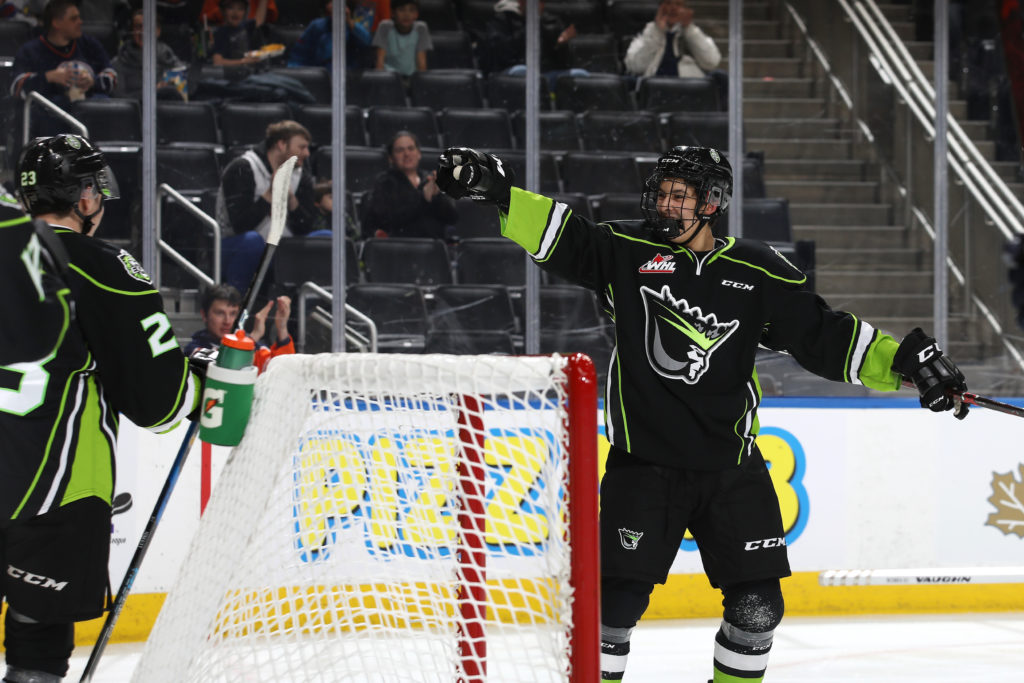 One of the reasons for re-entering the win column was special teams, as the Oil Kings were a potent 3-for-5 on the power play, while the Pats were 0-for-3.

Trey Fix-Wolansky was his usual, point-producing self, figuring into four of Edmonton’s six goals on the night, tallying a goal and three assists. He reestablishes himself as the WHL’s co-leading point-getter, joining the 20 goal club along with 41 assists for 61 points.

Todd Scott and Dylan Guenther each also enjoyed a memorable ‘first’ on the night, as Scott (1-0-1-0) earned his first victory of the season in goal, turning aside 24 of 25 shots.

Guenther, the first overall selection in the 2018 WHL Bantam Draft, tallied his first career WHL goal, which also proved to be the game winner.

Eight minutes into the game with their first shot of the night, the Pats took a 1-0 lead on a goal by Riley Krane, his fourth of the season from Steven Zonneveld and Kyle Walker.

After a number of chances by the Oil Kings the score remained 1-0 until just 12 seconds remaining in the opening frame. Fix-Wolansky notched his 20th goal of the season with a highlight reel marker, curling around the back of the net then patiently stickhandling away from a defender before turning and quickly firing the puck top corner over Max Paddock.

In the second period, Guenther tapped in a pass from Jalen Luypen for his first career WHL goal on the power play, with Liam Keeler picking up the second assist at 5:47 to put the Oil Kings in front, 2-1.

Loschiavo’s second point of the night and 13th goal of the season gave the Oil Kings a two-goal lead, 3-1, assisted by Fix-Wolansky to end second period scoring at 8:55.

Shots on goal through 40 minutes of play favoured Edmonton, 28-18.

The Oil Kings extended their lead to 4-1, as Carter Souch broke in on Paddock on a near-breakaway, planting the puck into his pads which forced the netminder into his own goal mouth and across the goal line. Ethan Cap and Conner McDonald picked up the helpers on the power play goal at 2:21 of the third.

Nearing the midway mark of the period, Fix-Wolansky fed Kemp with a cross-crease pass just inside the face-off dot. With Paddock out of position and Kemp with a wide-open cage, he instead elected to pass to Jake Neighbours on the doorstep, who tapped in his sixth of the season to make it 5-1 – another power play marker – at 7:09.

The final dagger came on the stick of Matthew Robertson, his fourth of the season, from Fix-Wolansky and Loschiavo to round out the 6-1 win at 14:30 of the third.

Regina was 0-for-3 on the power play while Edmonton finished the night going 3-for-5 with the man advantage.

Before puck drop, goaltender Boston Bilous was awarded the Blue Willow Restaurant/Vic Mah Trophy for Unsung Hero for the month of September.

The Oil Kings are back in action on Saturday, December 8 when they host the Kamloops Blazers at 7:00 PM MT for the 12th annual Teddy Bear Toss, presented by The Brick. Limited seats are still available here.

Great seats are still available for all Edmonton Oil Kings home games during the 2018-19 season starting at just $20, with a limited number remaining for Teddy Bear Toss on Saturday. Visit OilKings.ca for more information or to purchase.