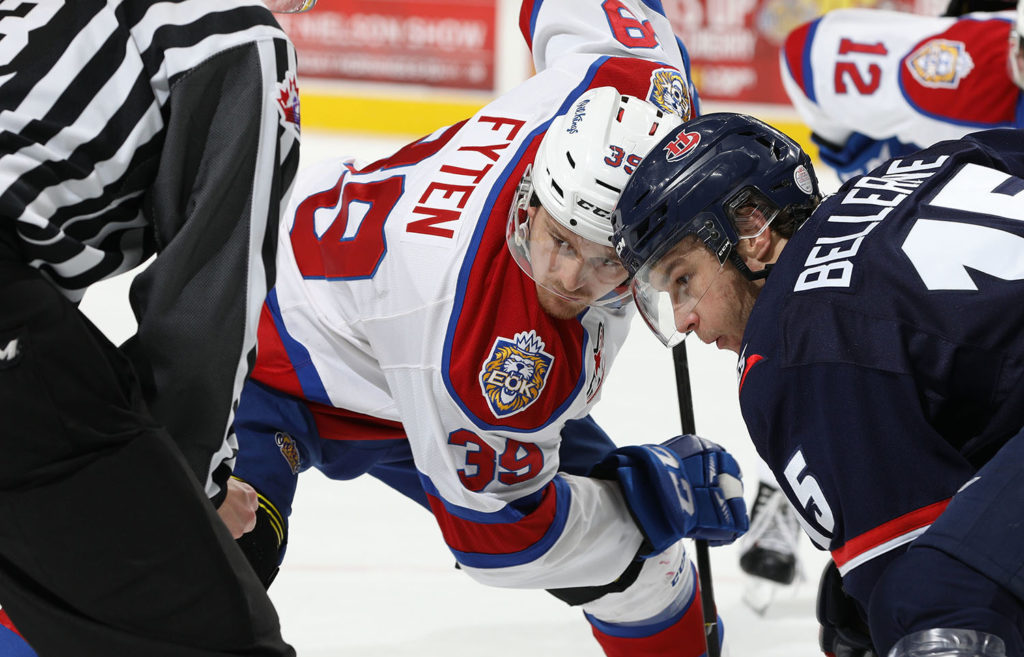 After winning seven straight on home ice, the Edmonton Oil Kings have now dropped two in a row at Rogers Place.

Jalen Luypen scored a highlight reel marker in the second to give the Oil Kings a 1-0 lead, but three straight goals by the Lethbridge Hurricanes proved too much to overcome as Edmonton fell, 5-2, to Lethbridge in front of 5,903 fans on Sunday afternoon.

Not only were the Hurricanes (21-10-4-4) trailing 1-0 in the second period, but they managed only a pair of shots in the opening frame; outshot 13-2 by Edmonton in the first period.

With the win, the Hurricanes hurdle the Oil Kings for top spot in the Central Division standings with 50 points in 39 games played. The Oil Kings slip to second with 49 points in 42 games.

After a scoreless first period the Oil Kings took a 1-0 lead on a beautiful goal by Luypen. The rookie broke into the offensive zone, toe-dragged around a Lethbridge defender then roofed the puck on the backhand to beat Hughes, from Trey Fix-Wolansky and Parker Gavlas, at 3:25.

The Hurricanes tied the game just over two minutes later on the power play, as Dylan Cozens tallied his 23rd of the season, from Nick Henry, at 5:57.

Logan Barlage gave Lethbridge its first lead of the game, 2-1, from Noah Boyko at 8:23.

Before the period was out the Hurricanes would add to their lead, taking a 3-1 edge into the second intermission on a goal by Taylor Ross, assisted by Jake Elmer and Cozens at 16:06.

Shots on goal after the first period of play heavily favoured the Oil Kings, 13-2, and 28-16 after 40 minutes.

With the Oil Kings on the man advantage heading into the second intermission, the Hurricanes were assessed an extra bench minor at the 20:00 minute mark, giving Edmonton a 5-on-3 advantage for 1:12 to start the third period.

On a blast from the point, Conner McDonald made sure the Oil Kings capitalized as the rearguard tallied his ninth of the season, from Brett Kemp and Fix-Wolansky, to bring the team to within one, 3-2, at 1:10. The goal snapped an 0-for-12 power play goal drought for the Oil Kings, but unfortunately it failed to generate any momentum as from there on out it was all Hurricanes the rest of the way.

Boyko’s fourth goal of the season was another power play marker for Lethbridge and made it 4-2 Hurricanes, from Cozens and Elmer, at 12:07.

The final goal of the game sealed it for the visitors, and gave Jordy Bellerive his 20th of the season, from Henry and Ty Prefontaine, at 18:04.

Lethbridge was 2-for-5 on the power play while Edmonton finished the night going 1-for-7 with the man advantage.

The Oil Kings and Hurricanes will clash again in Edmonton’s next game, Friday, January 11 at the Enmax Centre in Lethbridge at 7:00 PM MT.

After a game in Medicine Hat vs. the Tigers on Saturday, January 12 at 7:30 PM MT, the next home game for the Oil Kings will be Sunday, January 13 when they once again play host to the Hurricanes at Rogers Place. The game was originally scheduled for 4:00 PM but is now a 5:00 PM start.