Hurricanes Storm Back To Beat Oil Kings In Shootout 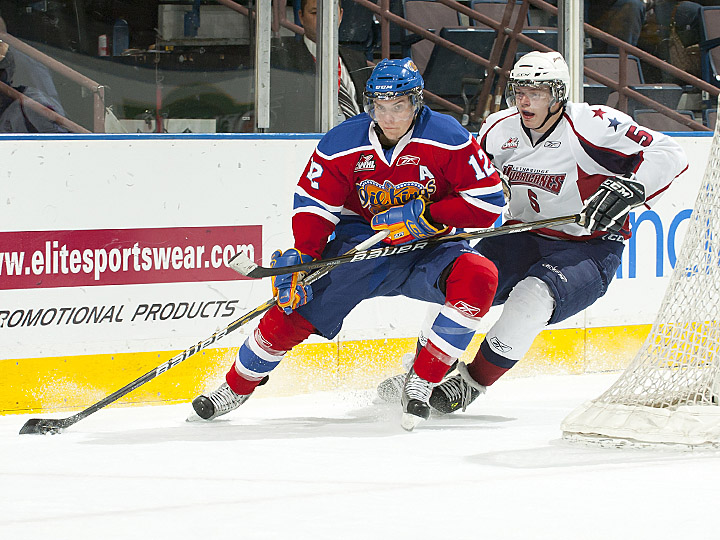 Lethbridge, AB – A wild third period that included seven goals scored by the Edmonton Oil Kings and Lethbridge Hurricanes resulted in overtime and then a shootout, with the Hurricanes prevailing in a 6-5 decision on Saturday at the ENMAX Centre.

A pair of goals by Kristians Pelss had the Oil Kings in command of the game with a 4-2 lead midway through the third period, but three goals in less than three minutes gave the Hurricanes a 5-4 lead with 5:18 to go. Jordan Hickmott scored the equalizer for Edmonton, leading to a scoreless overtime and the ensuing shootout.

The Oil Kings suffered their fifth shootout loss of the season, as Pelss, Hickmott and Dylan Wruck failed to convert on their breakaways, while Mitch Maxwell scored the lone goal for the Hurricanes to give them the victory. Maxwell had two assists in addition to the shootout winner, while Graham Hood led Lethbridge with one goal and two helpers.

In addition to Pelss’ two goals, fellow Edmonton Oilers draft pick Cam Abney scored one goal and one assist, while Michael St. Croix and Stephane Legault each chipped in with a pair of helpers. St. Croix is now just nine points away from becoming the Oil Kings’ all-time modern franchise points leader. Laurent Brossoit made 27 saves between the Oil Kings pipes, while Brandon Anderson turned aside 30 to pick up the win for the Hurricanes.

With the single point, the Oil Kings (26-27-2-5) remain in sixth place in the Eastern Conference with 59 points, but the Brandon Wheat Kings are now just one point behind them in seventh with one additional game played. The Prince Albert Raiders sit in the eighth and final playoff spot with 55 points.