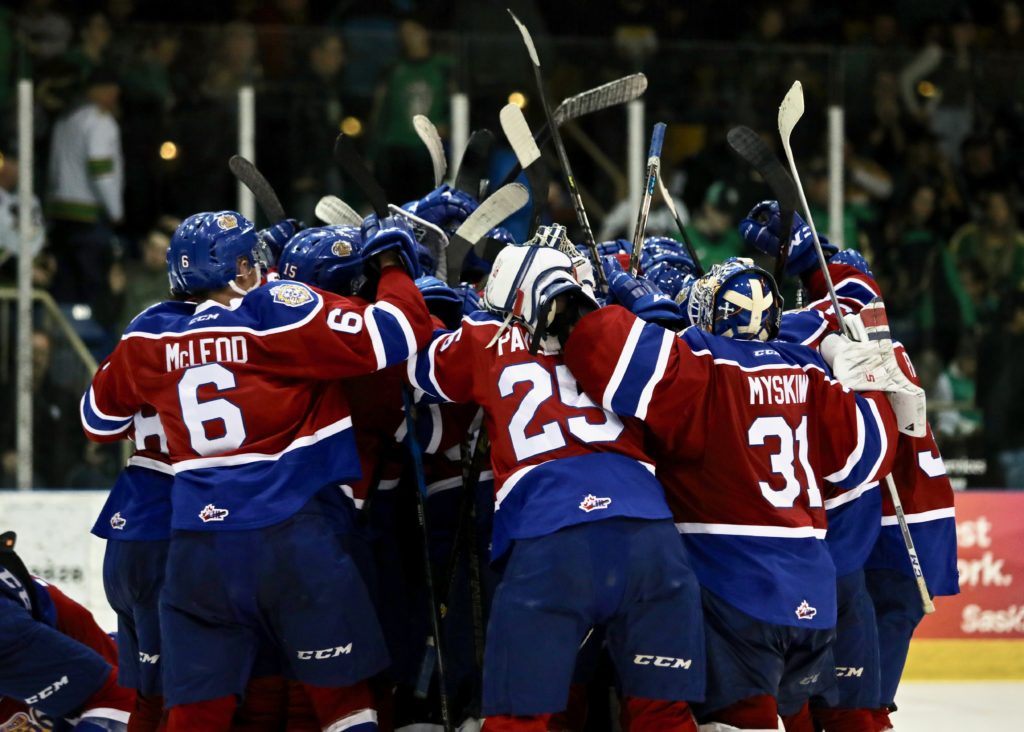 Jake Neighbours, for the second time these playoffs, wore the hero’s cape in the extra period.

“We’re a confident group going into overtime…there’s no panic,” said head coach Brad Lauer. “When you score a few overtime goals, you get confidence. Our group just has that right now.”

The opening frame was bursting at the seams with the offence game one was missing.

The Prince Albert Raiders stormed ahead with a 2-0 lead, outshooting the Edmonton Oil Kings 8-0 seven minutes into the first period.

The Raiders goals came off the sticks of Noah Gregor and Justin Nachbauer.

However, for the remainder of the period, it was all Oil Kings.

Matthew Robertson cut the lead to one on the powerplay at 6:02 with a blast from the point, beating a screened Ian Scott for the first time in the Eastern Conference Championship.

It was a Robertson point blast again creating the tying goal and again on the powerplay. This time, Andrew Fyten tipped home his fourth of the playoffs. Josh Williams picked up the second assist.

“We fought a lot harder to get to the net,” said Lauer. “Our powerplay was able to score which is good to see. But honestly, we can even do better. Keep going to that area.”

After twenty minutes of play the score sat 2-2 and shots 13-8 in favour of Edmonton. 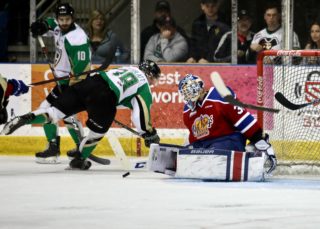 The third period brought the frantic action the series had promised.

After a pair of highlight reel saves from Scott, the Raiders rewarded their goalie and took the lead as Aliaksei Protos picked up his own rebound and beat Myskiw in close blocker side.

However, just over two minutes later, Oil Kings captain Trey Fix-Wolansky elected to shoot on a two on one. A great choice as he beat Scott low blocker side scoring his fourth of the postseason, knotting things back up and three.

Conner McDonald and Vince Loschiavo picked up the assists.

With that, for the fourth time these playoffs the Oil Kings needed overtime, taking their perfect three and oh extra time record into sudden death.

Both Scott and Myskiw exchanged game saving stops until Jake Neighbours’ sneaky shot from the left endboards beat Scott high glove side with five minutes remaining sending the series back to Edmonton tied at one.

“We’ve played two good road games,” said Lauer. “That’s the good thing. But now you have to take care of the split. You have to win at home now.”

Tickets for game 3 and 4 can be purchased here.