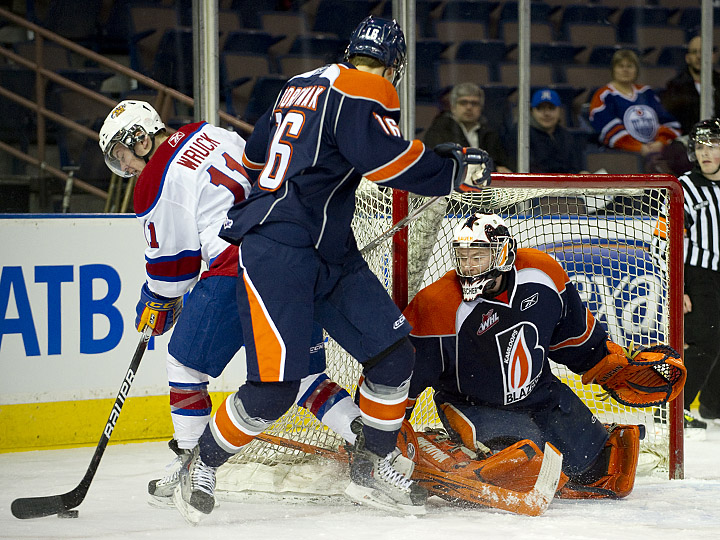 Edmonton, AB – A three-point performance from Michael St. Croix wasn’t enough to push the Edmonton Oil Kings past the Kamloops Blazers on Friday night at Rexall Place, as Thomas Frazee scored twice, including the overtime winner, to give the visitors a 4-3 decision.

St. Croix was in on all three Oil Kings goals, as he set up the first and third tallies in addition to scoring the second, giving him 59 points in 55 games this season. Mike Piluso and Kristians Pelss also found the back of the net for the home side, with Piluso and Jordan Hickmott each finishing the night with two points.

Despite being the away team, the Blazers quickly shook off their bus legs and jumped out to a 2-0 lead 11:51 into the opening frame. But Piluso and St. Croix exchanged near-identical goals to tie it up before intermission, with each Oil King setting up the other from behind the net for a one-timer tally. Frazee gave the Blazers a 3-2 edge in the second, but Pelss tied it up 17 seconds into the final frame, leading to OT.

Frazee scored his second of the game and the sudden-death winner 2:32 into the five-minute extra frame, one-timing a pass from Dalibor Bortnak on a three-on-two break past Jon Groenheyde. The Edmonton goalie made 31 saves in a losing cause against his former team, while Kamloops goalie Jeff Bosch turned aside 46 of 49 Oil Kings shots to pick up the win.

The Oil Kings now have a 26-27-2-4 record as a result of their second OT loss of the season. They remain in sixth place in the Eastern Conference with 58 points and have one game in hand on the Brandon Wheat Kings, who sit in seventh with 56 points. The Prince Albert Raiders are in the eighth and final playoff spot with 53 points.

After playing seven of their last nine games away from Edmonton, the Oil Kings head back on the road to play the Lethbridge Hurricanes on Saturday before returning home to Rexall Place on Wednesday to host the Calgary Hitmen at 7 p.m. It’s another K-97 and 96.3 Capital FM Wiener Wednesday, with $2 hot dogs all game long.