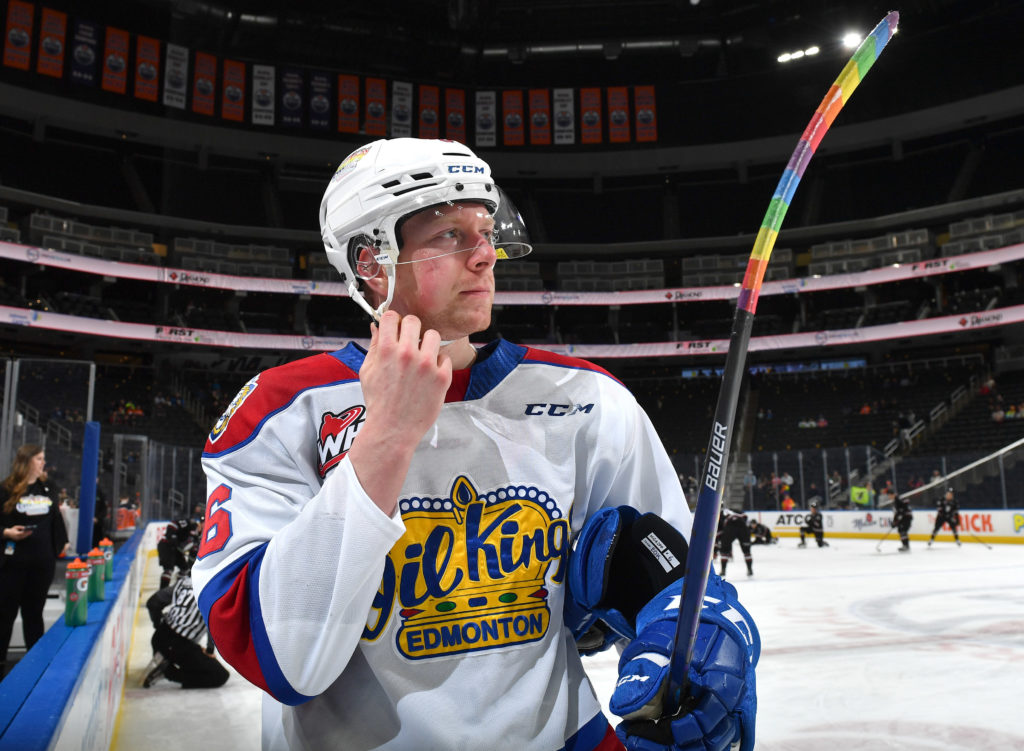 “I’m very humbled and honoured to win this award and I’m going to continue helping the community in anyway that I can,” said Prokop.

Prokop, an Edmonton, AB product, announced on July 19, 2021 that he was gay, becoming the first openly gay hockey player signed to an NHL contract and instantly became a trailblazer in sport for the LGBTQ2S+ community.

Over the past 10 months, he has done countless interviews to represent the LGBTQ2S+ community, and to share his story of coming out in the hockey community. He responds to online requests for support everyday and has done a lot of work to learn how to best support those in need.

Prokop worked very closely with the Oil Kings in the development of the team’s first Pride Day game.  He reached out to Bauer to have skates made with Pride colours and worked with the team’s Head Equipment Manager, Rogan Dean, to order pride themed sticks for himself and his teammates.  He has consistently posted on his social media channels to encourage fans in the LGBTQ2S+ community to know there is a safe space for them within Rogers Place.

He is an advocate for the Kids Help Phone and donated $10 for every shot on goal he recorded this past season, ensuring the program can continue to support youth in their time of need.  Thanks to donation matching from the Oil Kings, in partnership with the Edmonton Oilers Community Foundation, the Nashville Predators and plenty of friends and family he helped raise more than $12,000 for Kids Help Phone.

“When I came out last summer, all I wanted to be was an example for queer hockey fans who felt like they couldn’t belong,” said Prokop.  “Partnering with Kids Help Phone this past season has made it so much sweeter with seeing all the work they do with the queer community.

“I’d like to thank the Oil Kings, the Edmonton Oilers Community Foundation, the Nashville Predators Foundation as well as all the individual donors who helped match my donation this season.”

Prokop becomes the first player from the WHL to win the award since Tyler Wong (Lethbridge Hurricanes) won in 2016-17.

On the ice, Prokop enjoyed a career year after being acquired by the Oil Kings from the Calgary Hitmen on October 13.  In 58 games during the regular season, he put up 35 points (11G, 24A), 38 penalty minutes and a +35 plus/minus rating.

He helped the Oil Kings capture their third WHL Championship in franchise history after tallying 16 points (4G, 12A) and a league-best +23 plus/minus rating in the 2022 WHL Playoffs.

Prokop was drafted by the Nashville Predators in the third round, 73rd-overall, at the 2020 NHL Draft.