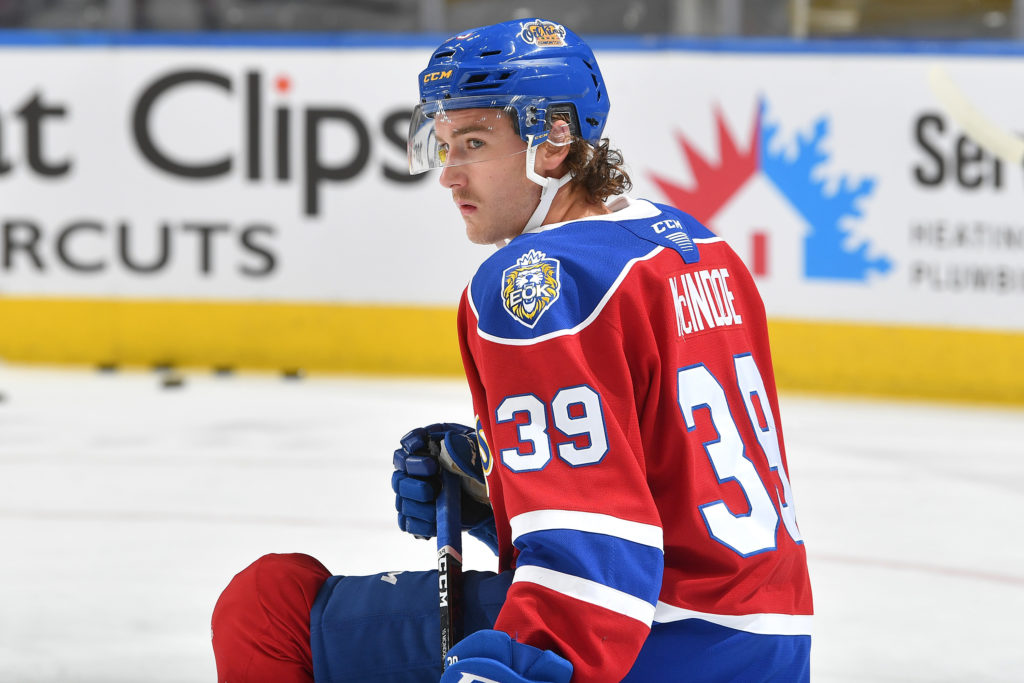 All players dream it, but very few achieve it;

Wednesday night was a story straight out of junior hockey lore for Ethan McIndoe.

The Camrose, AB native scored once in the first period on the power play, once again in the second, and capped off the trio in the third period – all while firing a team-high seven shots on goal – helping the Oil Kings secure their fourth straight win, and points in 14 of their last 15 games dating back to November 27 (13-1-1-0).

It was also a memorable night for defenceman Samuel Stewart, who registered the first three-point game (3A) of his 114-regular season game career and tied for a team-lead in plus/minus with a rating of +5.

Ethan Cap was also +5 on the night, firing five shots on goal and tallying his third of the season in the second period.

Jake Neighbours continued to turn heads with the third three-point effort by an Oil Kings player on the night with three assists of his own.

Brendan Kuny, Dylan Guenther (1G, 1A) and Riley Sawchuk were the other offensive contributors on the night for the visitors.

The Oil Kings counterpart in goal was a familiar face, as Boston Bilous (15-10-4-1) made his debut in goal for the Warriors after being acquired by the team this week in a trade with the Prince Albert Raiders.

Despite allowing six goals, Bilous surely held his own in front of his new home crowd making 48 saves on 53 Edmonton shots faced.

The Warriors buzzed in the opening moments of the game – especially on an early power play opportunity – but Warm closed the door with a number of pivotal saves to keep it a scoreless affair.

The Oil Kings were awarded their first opportunity of the night with the man advantage and McIndoe capitalized with a slick tip of a Matthew Robertson blast from the point to give the visitors a 1-0 lead at 10:52, with Guenther earning the second assist.

It was the lone goal of the opening frame, which saw the Oil Kings outshoot the Warriors by a 20-8 margin.

Four minutes into the second period McIndoe’s scoring touch continued to carry momentum, beginning with a nice defensive play by Cap who poached the puck at the Moose Jaw blue line and dished it to David Kope who then fed McIndoe at the side of the net. The veteran tucked a nifty backhand past the goal line for his second of the night, and 10th of the season, to make it 2-0, Edmonton at 4:09.

At the midway point of the game, the youngster Kuny earned his second career goal after tipping a Stewart shot, with the extra helper to Jalen Luypen at 10:03.

Plenty of offence ensued in the latter half of the period, starting with the Warriors who made it a 3-1 game at 13:06.

The Oil Kings restored their three-goal lead just 28 seconds later with Cap’s third of the season, a laser from the top of the circle, with Stewart and Neighbours picking up the helpers at 13:34.

Before the period was out the Warriors made it a 4-2 game at 16:09, which was how the score would remain headed into the second intermission.

Shots on goal in the second period were once again heavily tilted in Edmonton’s favour, 23-7, for a two-period total of 43-15.

In the third, the Oil Kings were quick to extend their lead to 5-2 after a shot from the point by Stewart sent the puck to the front of the Warriors crease. It was eventually buried by Guenther, who picked up his 15th of the campaign. The goal gave Stewart his third point of the night and Neighbours his second, with both picking up assists at 1:31.

Sawchuk from the far side beat Bilous under the blocker to make it 6-2 Edmonton, from Neighbours, at 7:49 making it 6-2, Edmonton.

With 46 seconds remaining McIndoe sealed his first hat trick to secure the 7-4 win into an empty net, unassisted, to round out the game’s scoring at 19:14.

Moose Jaw was 0-for-1 on the power play, while Edmonton was 1-for-2 with the man advantage.