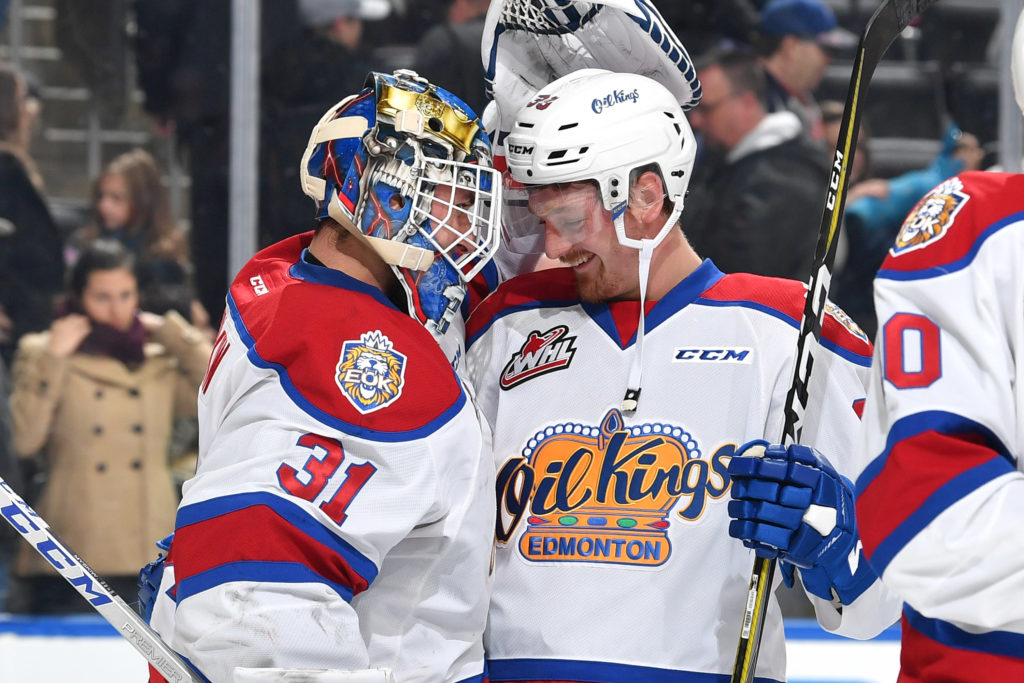 It may have been one of the most exciting, exhilarating games the Edmonton Oil Kings have played all season long, even though with 52:12 of the game having been played a single goal hadn’t been scored for either team.

The low-scoring affair still gave all in attendance lots to buzz about, as Myskiw and Anders put on a show to send the game into the third period scoreless with shots favouring Edmonton through the first period, 13-12, and 25-19 after 40 minutes.

The Rebels ended a 166:39 goalless streak dating back to 5:33 of the first period versus the Medicine Hat Tigers back on December 14 to take a 1-0 lead in the third period.

Reaping the benefits of a four-minute double minor to the Oil Kings, Jeff de Wit capitalized to score his 20th of the season, from Reece Johnson and Brandon Hagel at 12:12 of the third period, also snapping an 0-for-16 drought on the power play for Red Deer.

But the Oil Kings had no surrender, despite the fact they lost defenceman Matthew Robertson due to injury at the end of the first period, who did not return to the game. With just 2:16 left to play in regulation, Vladimir Alistrov found Conner McDonald at the point who wired a shot high-blocker side over Anders to tie the game, 1-1, with David Kope picking up the secondary assist sending the game to overtime.

Just 30 seconds into the extra frame the Rebels and their fans thought the hosts had ended it as the goal light and buzzer rang throughout the arena, but the referee behind the Oil Kings goal immediately waved it off and insisted the teams continue on in the 3-on-3 five-minute frame. It wasn’t until the clock showed 1:57 remaining that the next whistle blew, and after an official review it was determined that the call on the ice would stand as no goal and play would carry on.

With 1:11 left, captain Trey Fix Wolansky was awarded a great chance all alone in front, but was unable to beat Anders in the Rebels goal.

Myskiw (15-7-2-1) turned aside 29 of 30 shots he faced in regulation and overtime, along with three of four shots in the shootout.

Red Deer was 1-for-4 on the power play while Edmonton finished the night going 0-for-3 with the man advantage.

The Oil Kings are back in action to play the second of a home-and-home with the Red Deer Rebels tomorrow, Sunday, December 30 at 4:00 PM MT.